On the Road Again

written and photographed by Kevin Max | illustrated by Allison Bye

Hiking Mt. Saint Helens is one thing, but glamping it is an entirely different experience!

I wonder if most of America thinks of Mount St. Helens as one of my daughters does: burnt bacon as a result of the 1980 eruption. “It’s all going to look the same,” she insisted, “brown and charred.” The area surrounding the active volcano covers millions of acres—many of which were effectively untouched by natural disaster.

On Mount St. Helens’ southeast side, Gifford Pinchot National Forest is one of the country’s oldest. It forms a deep green apron around Mount St. Helens, stretching more than 2,000 square miles, and the forest sopped up America’s most destructive volcanic eruption in recent times. This young volcano got a 1,300-foot trim when its peak became a crater. Still, you stand there in awe and look at it as a heavyweight who has just stepped from the ring, beat on but unbeaten.

Eagle Cliff campground on the southeast shoulder of the mountain is three-and-a-half hours from Seattle, two hours from Portland and four hours from Bend, where we’re starting. On the longest day of the summer, you can snake past Mount Hood, across the Columbia River and into the Gifford Pinchot National Forest up Meadow Creek Road to Curley Creek Road, and still beat the golden hour of photography.

Leave a little extra time to amble into Walking Man Brewery in Stevenson. The laidback railroad sidehouse with beers of various well-crafted hoppiness pulls on a traveler’s taste buds. The heat that day in Stevenson reached 92 degrees. Even the shade couldn’t stop it from getting behind my eyeballs. We needed to get into the trees.

On this weekend, we fled our teen daughters, driving deep into the woods with mountain bikes and running shoes and a dog. We booked the first night at a campground that accepted trailers, just to get our bearing. The next night, we’d
freelance it.

Our dog, Guinness, is a sled-pulling breed who can, and yearns to, tug like an ox for miles on end. Snow makes him happier and his eyes wilder, but trails, any trails, are his understanding of the verb “go.” He looked out the window and saw trees getting bigger, rivers getting louder, trails more abundant and a jitterbug of wild overcame his car manners, compelling him to whimper to bypassing cedars, trails and deer. “Ohhhhh, look at that. Ohhhhh, did you see that,” his cavity shaking this sound from deep inside.

Curly Creek winds narrowly through Western red cedars to Eagle Cliff campground. Under a canvas of cedars and pines, this thatch-roof den is 10 degrees cooler than the beer garden in Stevenson. A general store with basics and showers and laundry make Eagle Cliff a good stop over for a night to clean up on longer trips. There are no hookups for trailers, but other amenities abound. Out the back of the campground is a logging road steep enough that you focus on your breath and footwork until you get to the top and look back down over Swift Reservoir, a deep-hued blue past a field of purple foxglove and white daisies with lemondrop centers. Click.

Sarah was taken by the beauty. The bald eagles circling overhead, she said, were a surprising treat. I felt bad pointing out that they were actually vultures and probably eyeing our dog as carrion.

Our first night called for something spicy and hearty—burgers stuffed with diced jalapeños and tiny chunks of cheddar. I wanted to have made those myself, but, in a rush to get out of town, I relied on the kindness of my butcher. Sarah made coleslaw and we garnished with veggie chips, another clever way to offset beef with vegetables. We popped a 22-ounce of Walking Man’s Imperial IPA and declared that that meal was the best.

We read and wrote for the first time together like digital nomads with everything in the world we needed right there. We soon fell asleep—gone to a soft and safe place in the Flying Cloud.

Morning came with a heat warning. Temperatures would reach beyond 100 degrees. We were up early waiting for the coffee to hit our brains and make sense out of this impending heat warning. Before 7 a.m., we were out the door for a run along the Lewis River.

Lewis River is a 96-mile-long tributary of the Columbia River to the south and has three dams that form Swift Reservoir, Yale Lake and Lake Merwin. Today, we’d see about 4 miles twice of this river in an out-and-back on soft trails. Rushing water pushed a cool breeze down the banks and along the trail. Overhead, a thick canopy blocked most of the sun, creating a partially lit diorama of green and gold beneath it all. The only people we encountered were a couple camping 3 miles in from the trailhead in what was probably one of the finest tent spaces cleared and flat along the Lewis River. I felt like I could have run for hours.

On our way out, close to the trailhead, we spied an isolated and unoccupied camping spot about 50 feet deep that would perfectly suit our pursuits for the next twenty-four hours. On Forest Road 9039 around milepost 20 and less than a quarter mile from the trailhead, there it was—a natural u-shaped cutout with a firepit near the back and nothing but trees all around. You could hear the Lewis River across the road and down a steep embankment. As far as trailer camping goes, this was a solid eight. If the river were diverted across the gravel road to our side to whisper there at night, there might be no better place. With this discovery, we felt like we had arrived as trailer campers in the backcountry.

We relocated, dressed and set out for the town of Cougar for re-supply and dinner items. We drove past it, before realizing we had hit town center. A 1990 census, the last official count, put Cougar population at 122. That seemed about right. Shopping for food comes down to two country stores across the street from each other, one of which doubles as a gas station. Both sold auto essentials. Creativity finds its honest beginnings in scarcity. Sarah walked up and down the few aisles of one store before connecting the dots—eggs, bacon, Tillamook cheese, noodles, an onion—spaghetti carbonara! And Washington cherries for dessert.

we drove aimlessly but with purpose, to find good views of Mount St. Helens and to see what Ape Cave was all about. Ape Cave is, reportedly, the longest lava tube in North America at 2 ½ miles long. At this time of year, its popularity spills out beyond the parking lot to cars lining the road approaching the lot. On a day already hotter than 90 degrees, who could blame the parade marching into a cool cave?

We decided to head back and scout a mountain bike loop for tomorrow. Originally, we thought this trip would be based around a seminal mountain bike ride that included 26 miles and 5,000 feet of climbing. The snowpack above 4,800 feet was a reminder of a big winter just behind us and a deterrent for that ride. From our camp, we surmised that we could ride 9 miles of forest road upriver to a Lewis River trailhead, duck in there and ride back along the trail we had run that morning.

Country store carbonara, Sarah called it, was really good that night. Of course, being in the woods is a drug that alters your ability to accurately review and rate food. For the first time, we prepared everything in the kitchen and ate together at the dining table. In three more years, we would be empty-nesters. If these were notes for that period, we were going to test well.

Lower Falls on the Lewis was just beyond the point where we’d duck into the woods tomorrow on bikes. As the sun faded over a distant ridge, we jumped in the truck and headed to Lower Falls for the golden hour of photography. We arrived at the day-use parking just as a photographer was packing up for the evening. He did not make eye contact. Had we missed the perfect shot?

You can hear the falls before you can see them through a dense forest and down a steep cliff. But seeing it for the first time is glee of discovery, all heightened and tickling where your hair makes contact with your head. A hundred feet down, the river spread to accommodate a wide multi-tiered rock façade. The water got thinner there to spread like blonde hair coming out of a ponytail and spill over its edge. It doesn’t matter how many people have seen Lower Falls—it has the keen ability to make it seem as though you are the first. The light was perfect.

Tomorrow’s mountain bike ride was deceptively technical and challenging. No one who saw me in a T-shirt and yesterday’s technology would consider me a top rider. God knows, you can spend a lot of money and end up with the social stigma of what Australians call “all the gear and no idear.” I don’t have the money for that status. My wife has better gear and more of an idear.

At one point during the ride, my front tire slipped left and headed off the trail and down a steep embankment. My body followed, cartwheeling. The water was another 30 feet down, and I hoped not to make it that far. For years, I had considered of what it would be like to have my bike plunge off a trail and down a hillside. Maybe I gazed too long into the eyes of existentialism in college courses, but I knew it would happen one day and that I would have to take responsibility for all of humanity with my actions. Existentialism is as somber as its Danish inventor—when you make a decision it is a model for all of humanity and all of eternity.

I stretched my body and bike to make for a flatter surface that would be harder to cartwheel for all of eternity. Suddenly I stopped, legs long out below me in a mess of prickly brambles. “Oh honey! Are you all right?” came from somewhere above me.

I sat up slowly, breathed deeply and took in the beauty of the Lewis below me and the smell of the red cedar all around me.

• Run, bike, hike the scenic Lewis River Trail
• Mountain bike on miles of trails
• Take the kids to Ape Cave
• Take a dip in eddies of the river
• Explore the waterfalls

Gifford Pinchot National Forest is named for Gifford Pinchot, the first chief of the United States Forest Service, who served from 1905 until his firing in 1910. He is said to have coined the term “conservation ethic.” 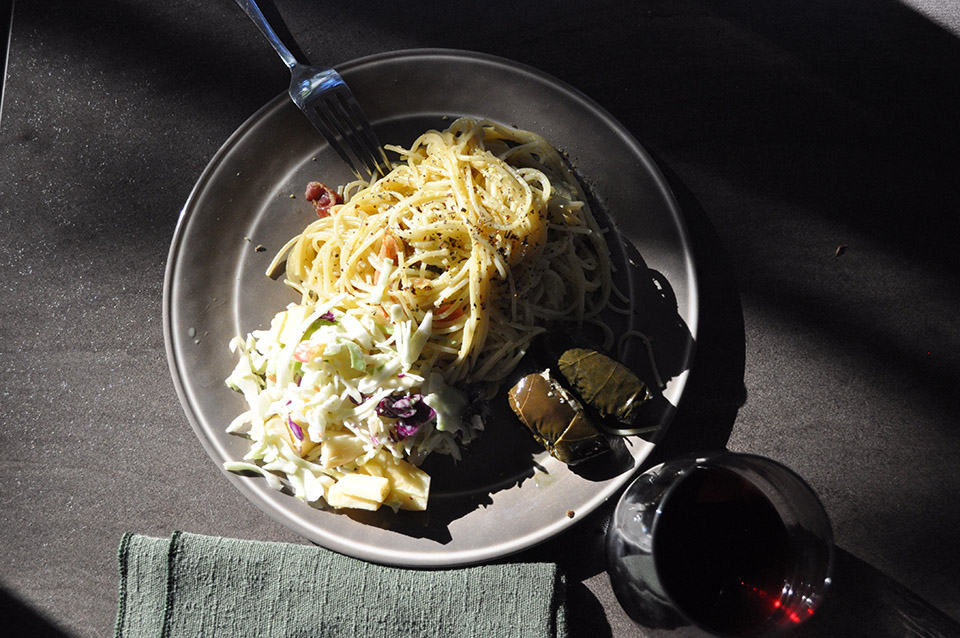 Serves 4
1 package of spaghetti
4 eggs
1 cup of grated cheddar cheese
1 onion diced
6 pieces of bacon, cooked
Pepper to taste
Boil water and add spaghetti. While water is heating, cook 6 pieces of bacon until nearly crispy. Remove, blot and set aside. Grate 1 cup of cheddar and set aside. Dice one onion and cook on medium heat in bacon pan with bacon grease until semi-transparent. Drain noodles when they are al dente. Scramble four eggs in a glass and pour over noodles. Add bacon, onion and cheese and toss until they are evenly distributed. Serve on plates or in bowls or camp cups.