A foray into Sasquatch territory with expert Mel Skahan

written and photographed by Gina Williams | illustrated by Allison Bye

A full moon is rising into the tree line, silhouetting a snag at the edge of an old clear cut as we crest the hill. On the way up in the inky pre-moonrise light, my guide, Mel Skahan, senses something. He jolts to a stop on the gravel logging road and stands stock still, then looks from side to side, slowly, arms slightly outstretched as if trying to touch the invisible. He takes a deep breath. I stop as well, and try to let my senses open. The cold mountain air is sharp with the scent of fir needles and duff. The hills beyond are dusted with snow. A light breeze flutters the branches. I listen. Silence.

I feel something. Something is here.

We’re not on an ordinary camping trip and we’re not in an ordinary place. This is Sasquatch Country, and Skahan has had many Sasquatch-related experiences— also known throughout the Pacific Northwest as Bigfoot. I first met Skahan when I was an adventurous 20-year-old college student in 1989 and working on a U.S. Forest Service fire crew based at the Wind River Ranger Station in Southwest Washington’s Gifford Pinchot National Forest. Skahan hadn’t yet had his Bigfoot encounters, but tales of Sasquatch sightings and experiences often came up as a topic of conversation during my time working in the woods. Unexplainable occurrences like the rumble of heavy, thudding humanlike footsteps jolting us to attention while working along a lakeshore, for example, weren’t uncommon. But for Skahan, those days were just the beginning. 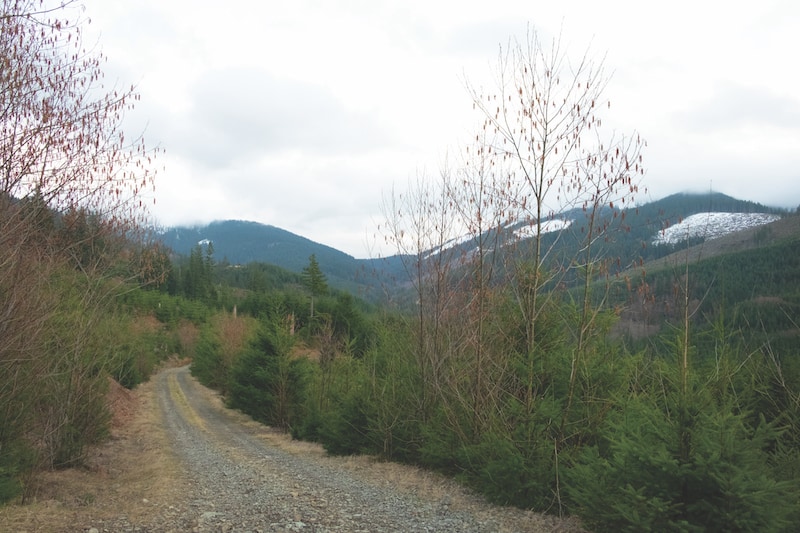 Now, as an adventurous 49-year-old grandmother, I’m thrilled to be here, honored to have the opportunity to reconnect with Skahan and learn about his experiences and his knowledge firsthand. We continue hiking to an expansive view of the Yacolt Burn State Forest near Larch Mountain, Washington and the Silver Star Scenic Area. Our tents are pitched down below. A few lights are visible in the distance. Off to the right, where the topography is steep and the earth plunges into deep ravines, it’s pure darkness. We didn’t see any other campers in that direction on the way up, nor are there any signs of human activity now. As the spring Blue Moon creeps higher, Skahan asks me if I’d like to hear some Sasquatch “vocalizations,” the loud bellows and whoops they’re reported to make—sounds Sasquatch seekers and enthusiasts sometimes mimic to get their attention.

Sometimes, he says, he gets results from trying to replicate the sounds he’s heard. “Of course, absolutely,” I say, goosebumps breaking out on my wool-covered arms even as the words come out, leaving me wondering if that’s really a good idea. Earlier in the day, I met up with Skahan at our agreed-upon rendezvous point in the small town of Cougar, near Ape Cave at the base of Mount St. Helens. Nearby Ape Canyon was the site of an alleged encounter in 1924 between a group of miners and some “apemen.” The reported attack by a band of Bigfoot (Bigfeet?) on the miners’ cabin was reported in the Oregonian. One of the miners, Fred Beck, also detailed the experience in a printed booklet. 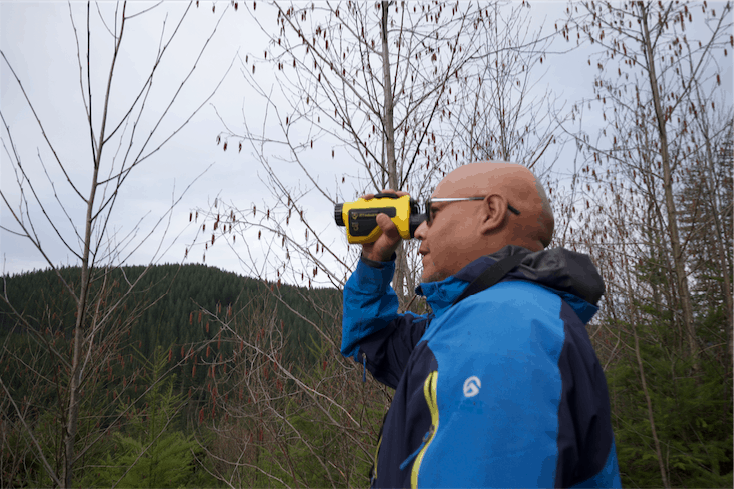 We’d originally planned to camp there, but the snow was too deep around Ape Cave, so we headed back toward Silver Star, where we set up camp and settled in around a campfire. In the glow of firelight, Skahan detailed his own experiences through the years.

Skahan is an enrolled member of the Yakama Tribe and works in the tribe’s Forest Management Section, which manages 1.2 million acres of land. In 1995, he and another worker were cruising timber. They had separated to check on two different areas when Skahan came across a set of footprints. They were 22 inches long with a stride of at least 51⁄2 to 6 feet. He says the toes in the tracks were perfectly visible. He led his co-worker back to the tracks. “And his mouth just dropped open,” Skahan said. As they followed the footprints, they found two additional sets that came together into one line. Throughout the trek, he and his co-worker both experienced an eerie feeling of being watched.

In the months and years since, Skahan said he’s had objects thrown at him, gotten close enough to smell what he describes as an unforgettable putrid stench, and has heard many vocalizations, including growls and howls and even a whistle. He’s known as the go-to guy to contact for Sasquatch reports on the Reservation—and reports are not uncommon. In 2006, he had his first and only sighting, when he spotted a Bigfoot running on the other side of a slash pile, about 170 feet away. He describes the creature as large, black and glistening, its arms hanging straight along its sides and moving faster than any creature he’d ever seen. As we set up our tents, Skahan describes what I might hear if a curious Sasquatch comes around in the night. 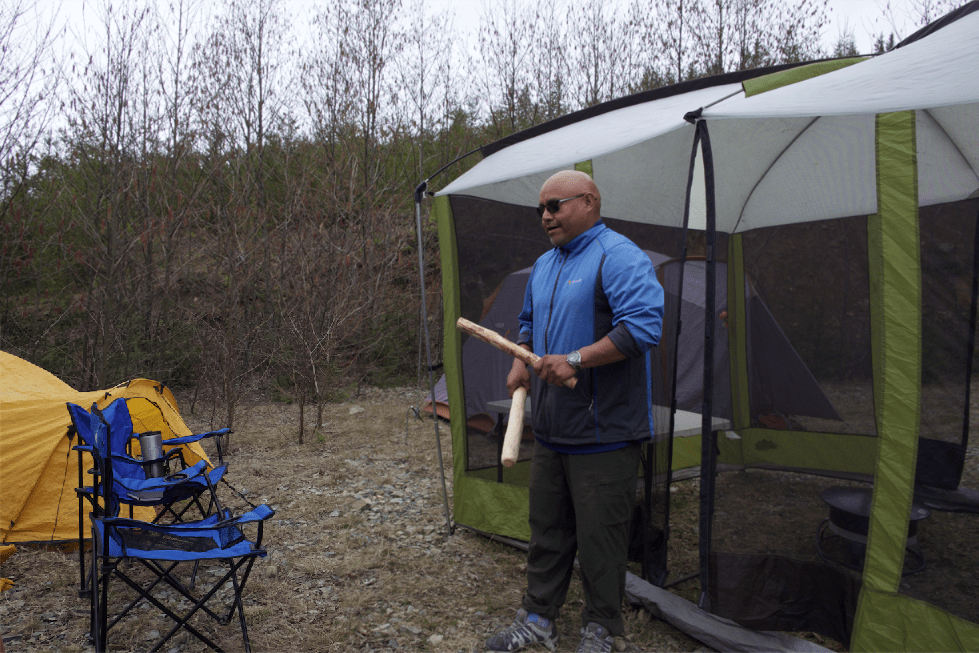 If it’s a bear, a coyote … you know, it’s a sniffing, snuffling sound, like a dog. If it’s a Bigfoot, you’ll hear a massive inhale. You’ll know it’s something different.

He takes a deep, loud, nasal breath to demonstrate and then jokes about my small mountaineering tent not offering much protection. He’s set up a sturdy six-person tent for himself. Skahan also details how his approach has changed over the years. He says he got sucked in pretty deep at times, even auditioning for the Animal Planet show “Finding Bigfoot” that first aired in 2011. He’s spent a pretty penny on devices like a thermal camera, a powerful night vision device and other tracking equipment. He joined the Bigfoot Field Researchers Organization (BFRO) and went on Sasquatch expeditions across America, including West Virginia, Northern California, locations throughout northern Washington, the Oregon Coast Range, and of course, the Yakama Reservation.

After collecting hair from what he believed to be a Sasquatch nest, he was later cautioned by a medicine man he’d never met as to the dangers of continuing his work in the field. The experience, he said, taught him that his quest for answers must be done respectfully. He tends to take a quieter approach these days. He doesn’t even vocalize much anymore, or clap sticks together in what’s known among enthusiasts as “wood knocking.” In October 2017, Skahan presented “Sasquatch and Spirituality: A Native American Perspective,” at a sold-out event at the Columbia Gorge Discovery Center and Museum in the Dalles, Oregon. He’s also a regular on the “Bigfoot Beast Mode Show” radio program that airs on KYNR Yakama Nation Radio. On that show, he’s joined by a crew of fellow experts, including Ryan Craig, Lonewolf, Reggie George and Bob Gimlin, famous for the legendary 1967 footage of what appears to be a Sasquatch in Northern California. 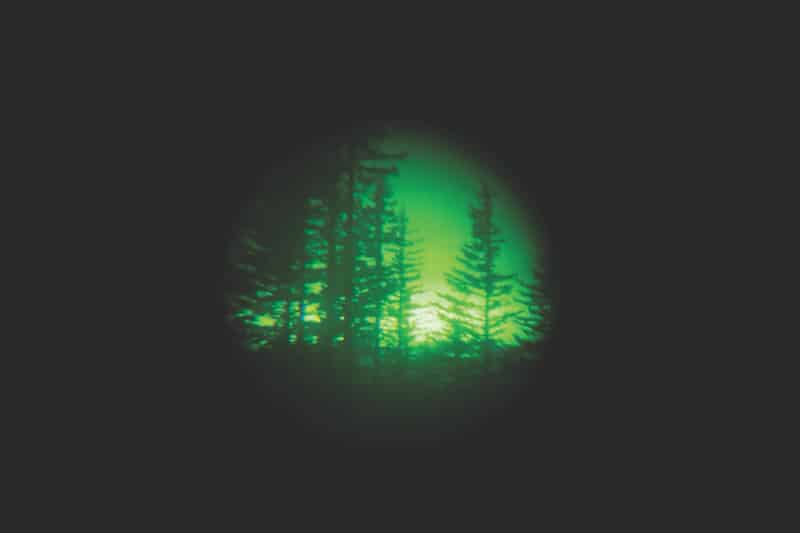 The film has never been disproven. Skahan and the Beast Mode Crew will present on August 18 at the Oregon Bigfoot Festival in Troutdale, Oregon. Back on the ridge, Skahan takes several deep breaths, preparing to vocalize. What will this mean to a Sasquatch, I ask him, if one’s out there? “Here I am,” he tells me. “Here we are.” My heart quickens. Earlier, he told me to imagine myself walking the woods as a 9-foot being. And that’s just what he sounds like as he lets out two loud, deep hollers somewhere between a howl and a bellow. I’m impressed. “Wooooooooaaaaaaawwwwwww.”

His voice echoes against the dark hills. Again, silence. Then he sounds again, a higher-pitched, “Whoooooooooop.” After several minutes, the call is returned from far below. It sounds just like Skahan’s whoop, just like it. We both hear it clearly. The shiver returns to my skin. Back at camp, Skahan tells more stories by the fire. He tells them straight. He doesn’t care if I believe him or not. He knows what he’s seen and heard, and that’s enough. “I don’t try to convince anybody. I’m not trying to prove anything. I just want people to enjoy nature and respect everything else that’s out here.” It’s time to turn in. I climb into my tent and listen to the sounds of the forest, mind open, ears perked, ready for whatever the night may bring.

WHAT’S IN A NAME?

The name “Sasquatch” is said to originate from the Halkomelem native language word sásq’ets, spoken by the Coast Sasqu Indians of British Columbia, Canada and meaning “wild man.” Native people have a long oral tradition describing hairy giants in the wilderness. The Yakama tribe has several names for Bigfoot. One is qah-lin-me, meaning “hairy brothers.” In the Himalayas, Bigfoot is known as yeti. The Chinese refer to yeren, and in Australia, the creature is called yowie.