Rowing in the deep

written and photographed by Greg Hatten

One of the most experienced rowers in our river party, along with his passenger, were stranded in the middle of a treacherous Class IV rapid called Montgomery, on the Owyhee River. His 16-foot raft was fully loaded and firmly wedged between a boulder twice the size of his boat and the high canyon wall rising several hundred feet on the left side of the river. The strong current pounded the boat from behind, wedging it tighter and tighter in the gap and threatening to stand the raft on its end and flip it completely over.

Two days and 30 miles upriver from this spot, our party of eight boats, nine men and two dogs began this adventure in one of the most remote and isolated areas in the United States. The Owyhee River runs through three states in a vast and natural canyonland sprawling more than 2 million acres. It’s farther away from major highways (and cell service) than just about any area of similar size in the United States. In the 50-mile stretch above the Owyhee Dam, there are maybe one or two ranches in sight and no visible roads or trails. Cattle outnumber people. 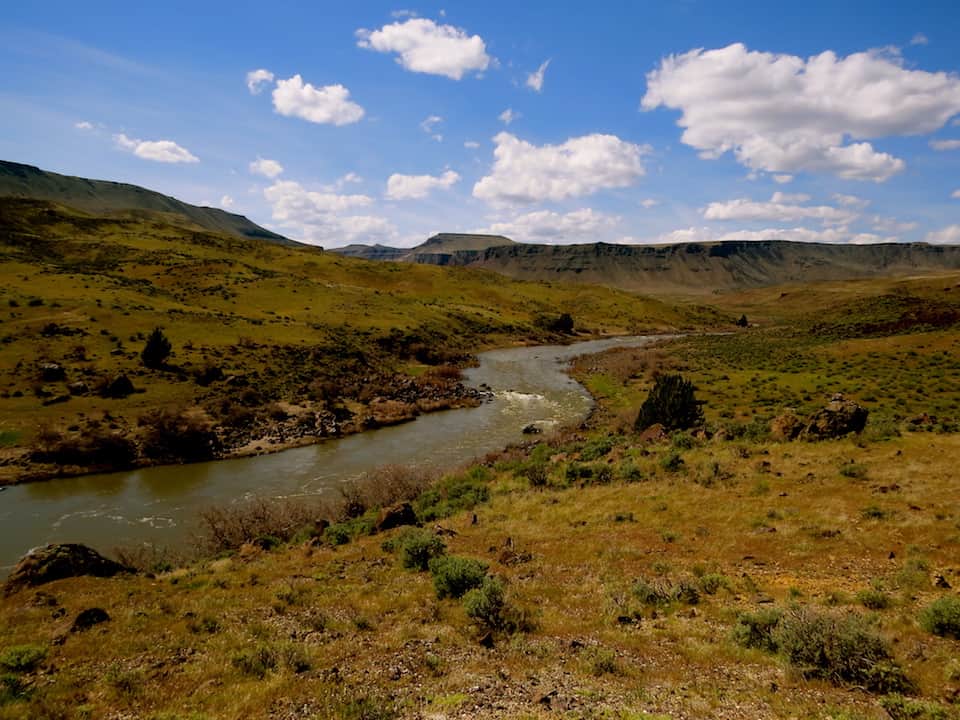 About the only way to see this stretch of river from Rome to Leslie Gulch in the High Desert of southeastern Oregon is via the river, when there is enough snow and spring runoff from the Sierra Mountains in Nevada to safely run it—which hasn’t happened in several years.

So last spring, when rainfall was above normal on top of a higher-than-average snow level in the Sierras, my posse of river rats dropped everything, loaded up and headed for the Owyhee.

On the long drive across Oregon, I felt myself getting “small” as we left all signs of civilization and traveled into the vast. For miles and miles we traveled two-lane roads lined with sagebrush that stretched out so far the road looked like a single straight line no wider than a string. The horizon was dominated by mountain peaks as wide as they were tall. 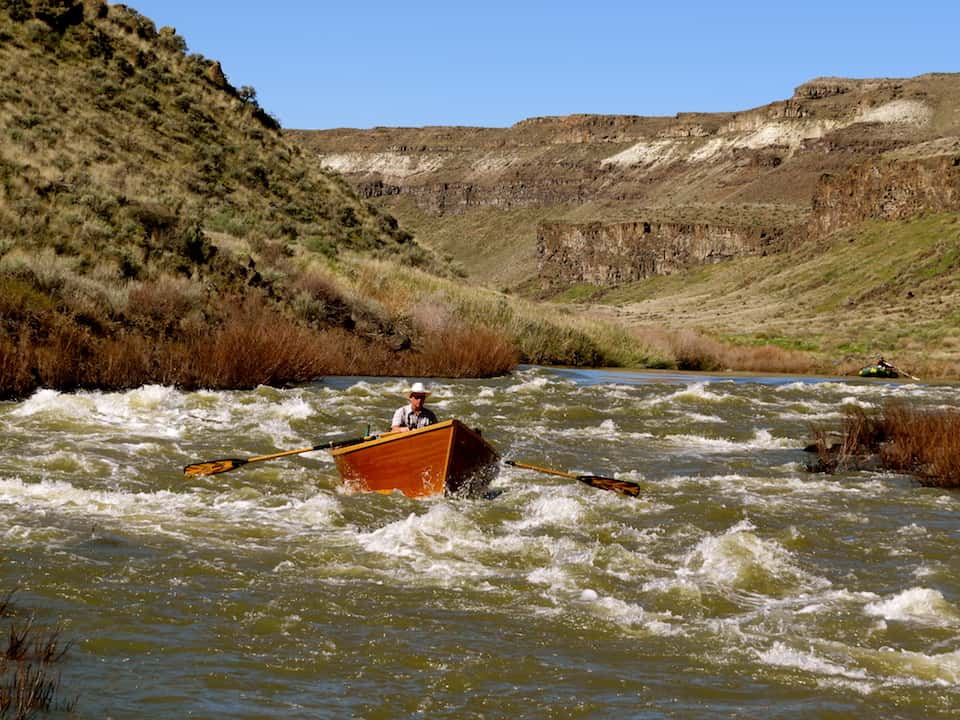 We finally reached the river after a nine-hour drive from the McKenzie Valley, and we set up our tents as the wind blew cold through the campsite. The next morning dawned crisp and clear.  Cowboy coffee warmed our hands as we broke camp and loaded gear into our boats. The thermometers in our trucks verified it was 20 degrees. Frost was everywhere—on the tents, the boats, the camp chairs, the blankets, anything exposed to the overnight river moisture and cold temps had a layer of white that sparkled and glistened in the rising sun. 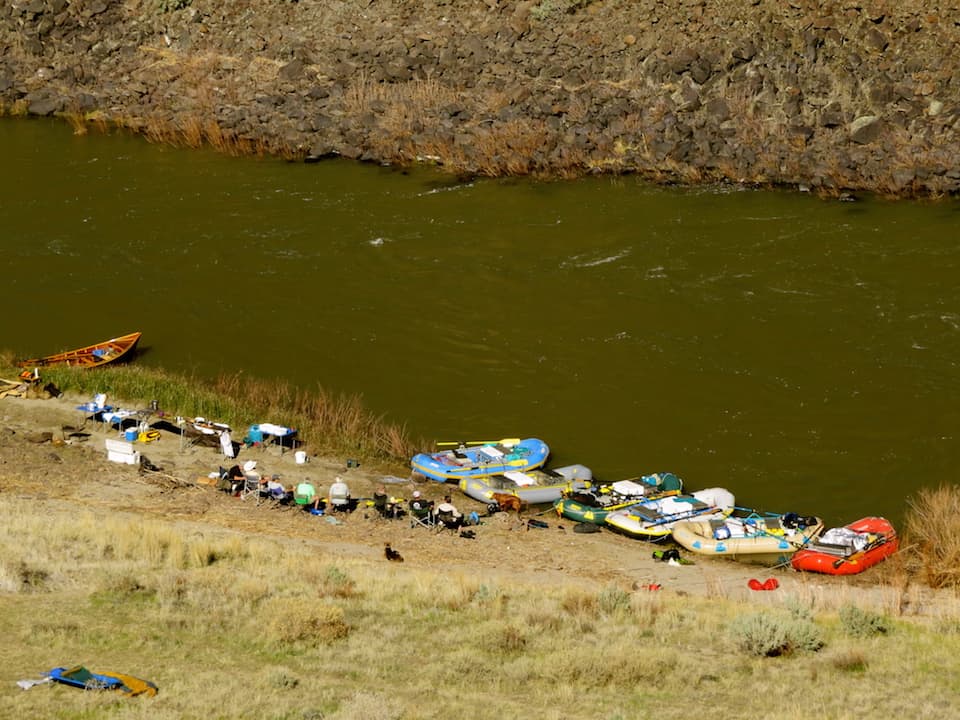 Within the first few miles of rowing, farm fields gave way to high riverbanks and sharp short cliffs that foreshadowed what was to come. Pillars of sun-bleached sandstone and volcanic red rock columns began to appear on both sides of the river and stood erect like guardians of the ancient canyon we approached.

By mid afternoon we were already in the shadows of the canyon walls, so we pulled over, set up camp and started dinner as twilight approached. 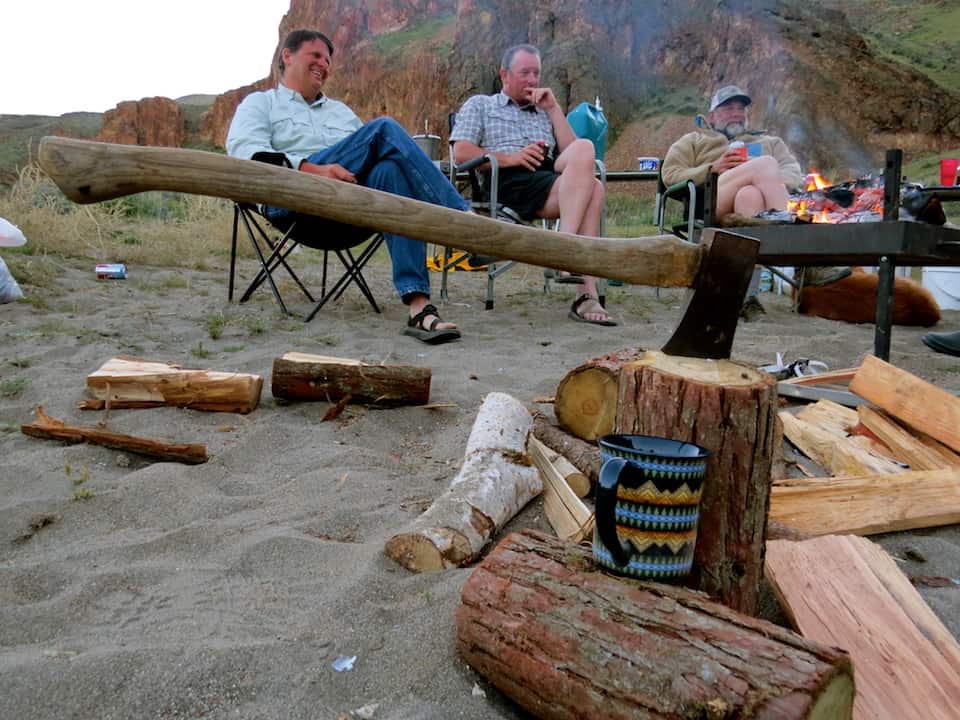 Our cook team for the night prepared fresh halibut on an open flame, rice, salad and cheesecake—as memorable as the river we slept beside. It was a three-blanket night on my cot under the stars. My breath hung heavy in the cold air as I peeked through the slit of my bedroll and admired the view of the night sky. 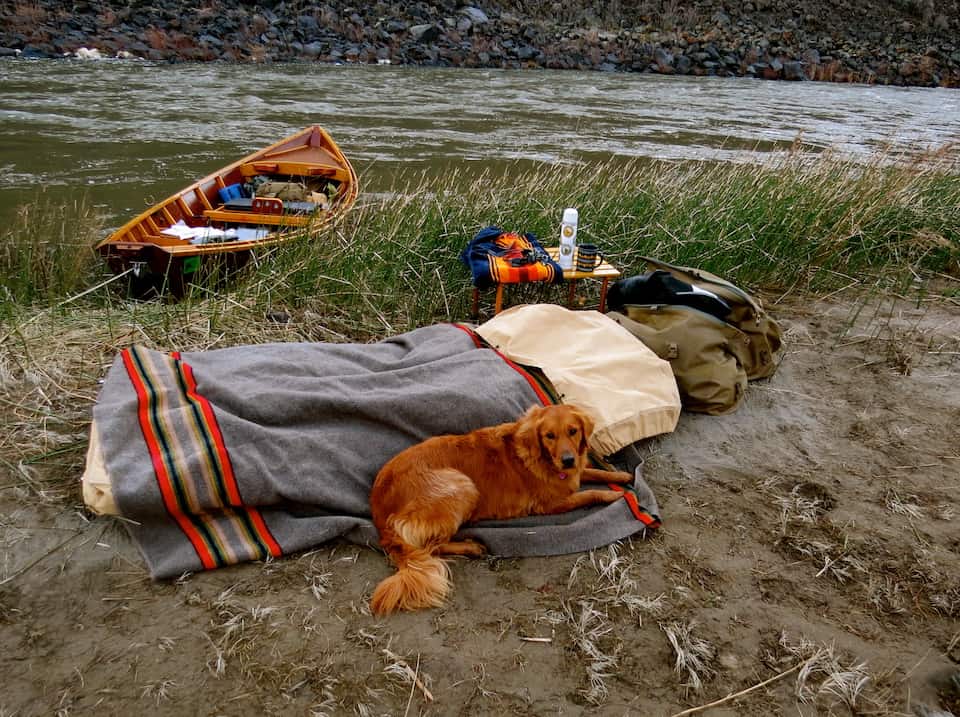 After running nearly 15 miles of river on day two, we approached a narrow opening where the river takes a right turn, then careens left at the base of a ten-story rock wall. It’s technical and tricky, but as we rode out the wave train of the rapid called Whistling Bird, I immediately wanted to go back to the top of the rapid and do it again. We camped just downstream and the pictures I took at sunset of that narrow slot captured an image I’ll never forget.

That night, most of us slept under the stars after a Dutch oven meal of prime rib, baked potatoes and cobbler as the temperature crept up to the low 40s. The after-dinner whiskey felt as warm as the night air.

By now we were in the deepest part of the canyon and cliffs on both sides rose straight up to touch the sky. The ridgeline of the canyon walls snaked across the night sky, and the stars were brilliant. 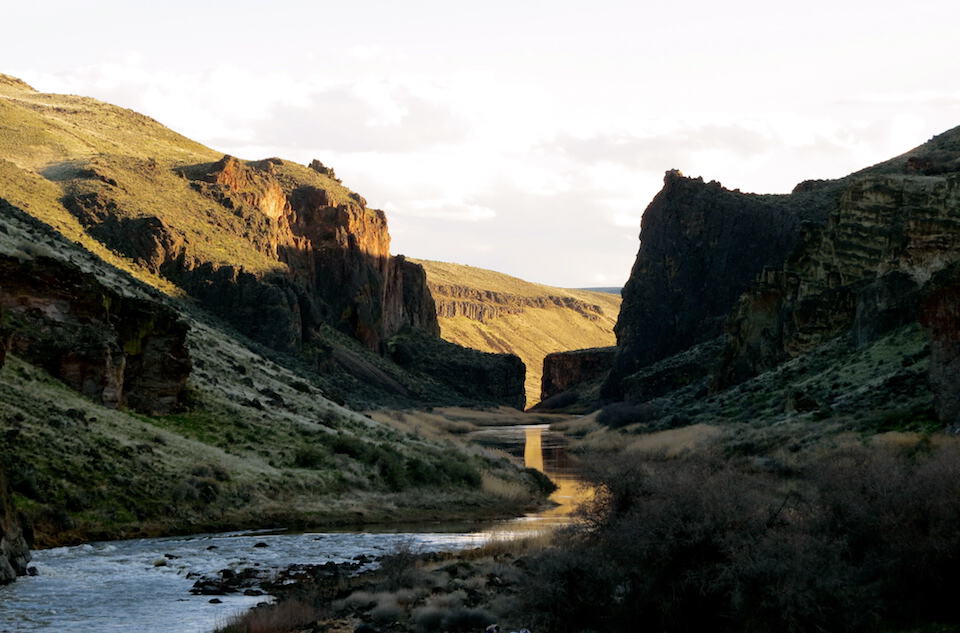 Just an hour into the next day, we faced the notorious Class IV Montgomery rapid. My friend Aaron waved me to shore and filled me in on the predicament our teammates were in. The whole river tilted to the left in the rapid and the current, swollen from the spring runoff, rushed down the drop for 200 yards before slamming into the canyon wall. Our rafters couldn’t break through the vice-grip of the river and were pinned between the rock and the canyon wall, with the nose of the raft teetering over the edge of an 8-foot drop.

Aaron and I jumped into our more nimble drift boats and were able to break the grip of the river. With a lot of effort and a little difficulty, we found safe passage down the right side.

At the bottom we pulled hard on the oars and got our boats to a cliffside eddy on the left side of river just downstream from the raft. The guys in the raft tied together every rope they had and threw the long line overboard. I fished the rope from the water and threw it up to Aaron, who had scrambled up the rocks above me for greater leverage.

He leaned back and pulled hard on the rope. It was just enough to get the front end of the raft to tumble over the drop. The boat splashed to freedom, and we tossed the rope into the raft as it passed 15 feet below us. 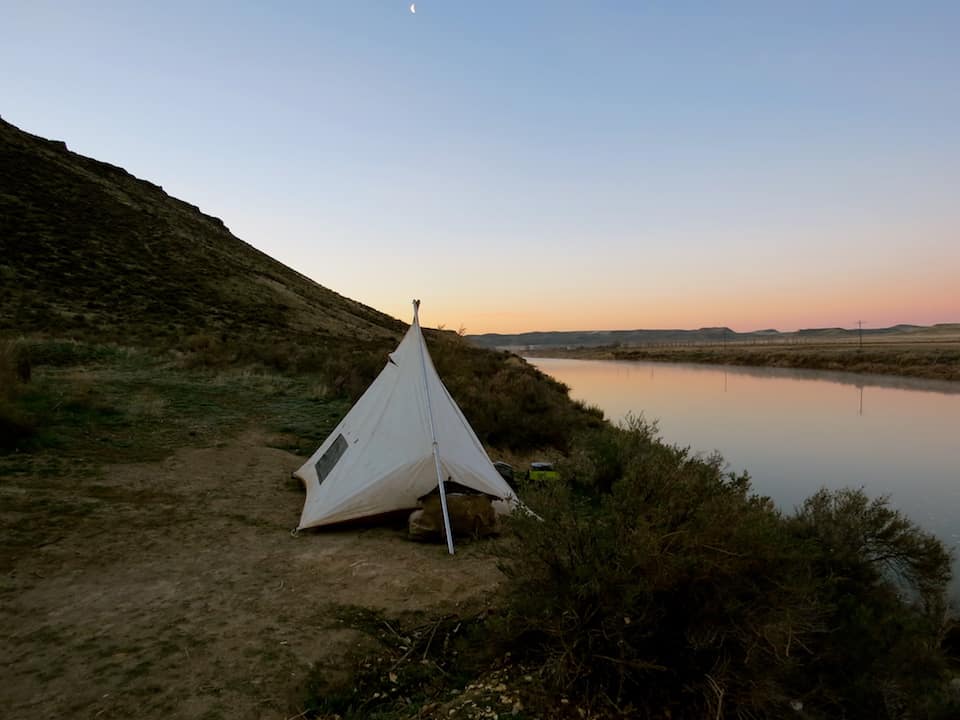 More close calls took place in the canyon rapids before our adventure was over. The last night in camp, we enjoyed another great meal and more whiskey than usual to celebrate the trip. Campfire smoke followed me to my cot and eventually faded—but the smallness I felt while rowing in the deep Owyhee is with me still.