Seven hundred fifty miles of cold water, unsupported and engineless up the Inside Passage—this is my kind of adventure.

My sister Emily surprised me by announcing she wanted to join me. We borrowed our dad’s twenty-five-year-old homemade trimaran and texted an old sailing friend, Jenny Goff, who immediately responded, “Heck yeah!” Suddenly we had our team: three thirty-something ladies on an aging homemade boat. We had our work cut out for us.

In between the starting line in Port Townsend, Washington and the finish in Ketchikan, Alaska were hundreds of miles of unfamiliar waters, extreme tidal exchanges and unpredictable weather. Two checkpoints—Seymour Narrows and Bella Bella—were the only requirements to our route planning. Like everything with Race to Alaska, it’s an exercise in determination and grit.

According to its creators, the Race to Alaska is “North America’s longest human and wind-powered race.” On the line was $10,000 to the winning team and a set of steak knives for second-place finishers. The consolation prize may seem an absurd step down, but isn’t racing to Alaska entirely self-supported nonsensical to begin with? 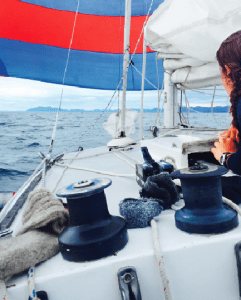 We spent most of our weekends between January and May chipping away at a seemingly endless to-do list—sanding, painting, replacing running rigging, studying nautical charts and most importantly, finding a way to propel ourselves when the wind died. With four weeks left to the starting gun, we launched the boat in Lakebay, Washington for trial runs.

People asked if we thought we could win. The answer was definitely no. Like running a marathon, few people enter to actually win. Most enter to feel that incredible sense of accomplishment and to push their limits. We wanted to know if we could get ourselves from Washington to Ketchikan without a motor.

In the early morning darkness of June 23, participants in the Race to Alaska awoke to howling wind from the “wrong” direction. We knew it was going to be almost impossible to row our little boat out of the marina. We gave ourselves a pep talk, took a few deep breaths and pushed off. I tried to shout encouragement to my team, but the wind sucked the words from my mouth. My voice cracked and my heart pounded in my throat as I tried to wave and smile at the rows of cheering race fans up on the pier. I wondered if they realized I was about to smash my tiny boat to pieces on the beach in front of them? Giving up was not an option, so we rowed. Hard. Just as the port side of the boat nicked the tar-covered piling of the break wall, I loosened up the headsail furling line and the sail snapped full of wind. We shot ahead into open water, clear of our first big obstacle. A spectator from the pier later told me they were all chanting, “Go starboard!” hoping if they chanted loudly enough it would happen. She said it was like clapping if you believe in fairies. That sentiment embodies this adventure—strength, endurance, preparation and maybe a little bit of fairy dust.

The first few days passed in a blur of high wind and heavy current. Somewhere near the top of Johnstone Straight, we were taking on water from an unknown location and started having electrical problems. Our aging solar panel, bought for a trip to Mexico in 2003, stopped charging the battery. As the light faded that evening, so did our voltage. We spent a long night without running lights, electric bilge pump or depth sounder, and watched the battery on our backup navigation device slowly die. At some point, sleepy and frustrated, I attempted a pep talk. It went something like this, but probably less intelligible: “This race is just a series of problems we have to solve. If we can solve them all, we will probably make it to Ketchikan.” Inspiring stuff, right?

We drifted and rowed through the night and well into the next day, inching our way into Port McNeill, where we were met by smiling race fans who offered hot showers, a battery charger, replacement supplies for our dwindling first aid kit, updated us on the progress of our competition and made sure we had enough money to go up to the pub for hot food. Our morale was instantly restored. We slept a few hours and headed back out with the changing tide. 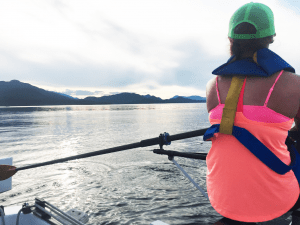 Sometime around day six or seven, on a clear windy night flying up Fitz Hugh Sound, my teammates were stuffed down in our little cabin snoozing while I relaxed at the helm, enjoying speeding along in the moonlight, until … thud! We hit a deadhead—one of many floating logs roaming the inside passage—bringing us momentarily to a full stop. I called for Emily to check for water inside the boat and for Jenny to check the hydrofoil. I envisioned it had been ripped from the outer hull, leaving a gaping hole right at the water line. Emily dove out of her bunk, still mostly asleep, and in her groggy state thought her tangled sleeping bag was water dragging her down. Our headlamps frantically beamed around the ship but revealed no damage. Our heartbeats slowed, and we laughed at our own panic.

The race wasn’t all problem solving and panic, though. Along the way there were also rainbows, whales, amazing downwind spinnaker runs, tiny beautiful anchorages, leaping dolphins, beautiful sunsets, and, in the pitch dark of 2 a.m. at the finish line in Ketchikan twelve days and fourteen hours later, a dock full of cheering people armed with cold beer and warm hugs. We finished seventeenth out of twenty-three finishers (twenty-one teams dropped out along the way). I knew I was going to love this crazy adventure, but what I didn’t expect was that I’d be sailing straight into a huge new community of equally crazy people—those nuts enough to take this wild ride and those enthusiastic enough to wave us across the finish line in the dead of night, and the armchair sailors obsessively reloading the race tracker page for updates from our tiny onboard tracking beacons. They all shared in the terror, gratification, exhaustion, humor, and pure excitement that made up each of those 750 miles. I’m going again in 2017.~~~

Tags from the story
sailing