A ladies’ weekend in the Emerald City

Our Seattle-bound train from Portland arrived at the downtown station to a sea of jerseys, cheers and face paint. It was the Seattle Seahawks’ season opener and their stadium, CenturyLink Field, towers over the adjacent Amtrak King Street Station. The girls’ weekend we had planned would take on a different setting than the mobile tailgater that was King Street Station at the moment.

We checked in at the stylish downtown Hotel Max. Soon we were well-heeled, shiny, flowing and heading out to dinner, wistfully passing the shopping mecca Westlake Center. We’d be back for retail therapy.

Less than a mile away at Local 360, most of the ingredients on the comfort food-inspired menu are sustainably sourced. We shared small plates of root beer-glazed pork belly, mussels and farm-fresh salads while sipping Monorails (spiced pear liqueur, maple syrup, lemon and orange).

Out we went and into the evening at Capitol Hill, a neighborhood known for good people watching, a Jimi Hendrix statue and Unicorn, an iconic lounge with corndogs and cocktails. All walks of life gather here to play vintage pinball under broadly striped walls and taxidermied animal heads.

A morning run to the waterfront brought us to the Olympic Structure Park. Along the four-mile jaunt, we easily found (maybe, too easily) pastries and coffee in a city renowned for its coffee shops.

After freshening up at the hotel, we wandered around Pike Street Market for a touristy and fishy experience. Local fisherman hawk fresh seafood from rows of crushed ice-laden displays. We walked a few minutes off the main drag to Japonessa to experience fish in another form. Happy hour sushi rolls are fresh, served all day in the bar and come in decent portions.

The Chihuly Garden and Glass museum is just a short Monorail ride across downtown. Washington-born glassblower Dale Chihuly’s colorful works fill black-walled rooms with whimsical scenes that evoke visions of Fantasia taking over the seafloor. After ogling glass, we were ready for the crux of any girls’ weekend at Ananya Spa, just a few blocks from the museum.

Fresh from the spa, we Uber-ed to Gas Works Park above Union Lake for the best sunset vista before heading to dinner in the artsy Fremont neighborhood. Once a counterculture icon, Fremont is now gentrified but, thankfully, not petrified. Revel is a Fremont Korean fusion joint owned by chefs Rachel Yang and Seif Chirchi, whose savory pancakes and noodle bowls have quite the following. After dinner, we strike up conversation with locals by asking about the Fremont Troll while sipping whiskey drinks at nearby bar, 9 Million in Unmarked Bills. 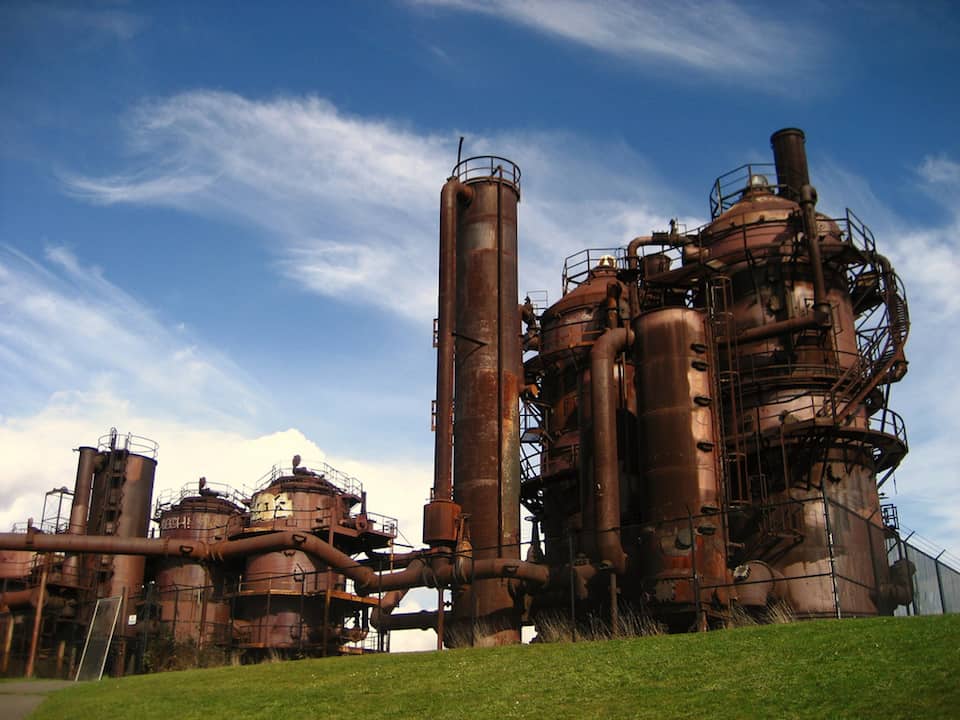 The next morning, we took an excellent brunch at Lola, laughing about the weekend’s capers. The James Beard award-winning restaurateur’s downtown brunch haven, Lola, has classic breakfasts with a Mediterranean twist. Since someone else would be driving our home-bound train, bloody marys weren’t out of the question.

On the train home, I thought about how long it had been since I’ve booked a girls’ weekend. I resolve that there will be less time in between these jaunts. What may seem indulgent at first blush is equally about reviving the younger version of yourself. Doesn’t everyone in your life benefit from that?

The downtown Monorail was created for the 1962 Seattle World’s Fair and carries approximately two million passengers every year.

Pike Place Market has the longest continuously operating farmers’ market in the United States, opened in 1907.

Car2Go | Tiny little cars are parked all over the city for members to drive and leave at their destination. | One-time $35 sign-up fee. Rates available by minute, hour or day. | car2go.com

Give him a bundle of travel, cocktails and inspiration to do more with our Father’s Day Package–a one-year subscription to 1859 Oregon’s Magazine, our summer road trip guide and cocktail recipes from local bartenders and distillers.