Discover Tacoma: Art and culture for the whole family

Written and photographed by Isaac Peterson

We swept into Tacoma beneath an overcast sky. We looked out over the water toward the base of Mount Rainier, its peak hidden in the clouds.

We had thought of Tacoma as a waypoint between its two sister cities, Portland and Seattle. As a young family used to trekking to the Emerald City and the City of Roses in search of art experiences for our intellectually curious 6-year-old daughter, Ruby, Tacoma had never really been on our radar as anything other than the TAC in SEA-TAC. What was its nickname, anyway? Sapphire City? City of Hydrangeas? Nothing came to mind.

Tacoma does have a nickname—the City of Destiny, acquired at the turn of the century when it was a major railroad nexus and an important departure point for ocean freight. In pre-automobile America, Tacoma was an economic powerhouse for shipping and international trade, and a logical choice for the western terminus of the transcontinental railway, although it eventually ceded that honor to San Francisco.

The buildings of that era project a profound optimism and announce the international significance of the city in every rebounding art nouveau curve. This style can be seen everywhere, and the curvilinear constructions seem as futuristic today as they did a hundred years ago.

Tacoma’s welcoming statue in Tollefson Plaza is a towering cedar carving depicting a native woman with her arms outstretched. Its creator is woodcarver Qwalsius-Shaun Peterson, a member of the Puyallup tribe. The carving’s simple geometry is refreshing, a true masterpiece of native woodcarving at the center of town instead of the usual elegiac bronze.

We checked into the Courtyard Marriott. From our room on the fifth floor, we could see downtown as a whole, the interplay of modern and centenary architecture spreading out along the water like a string of ornate beads: the ascendant metallic cone of the Glass Museum, the rock-candy pillars of the Bridge of Glass, the spherical courthouse, the rebounding arches of the Washington History Museum, and the Tacoma Dome rising through the mist in the background. Tacoma has sought for decades how best to utilize its perfectly preserved architecture—and its solution has been the creation of a string of museums. Running along the waterfront, Tacoma’s museums rival those of Washington, D.C., in the breadth of their exhibits. Set aside at least one full day for museums, if not two.

Before setting off on our museum day, we had breakfast at the Renaissance Cafe on Pacific Avenue, where I had possibly the best salmon omelet I’ve ever eaten. The fresh-caught local salmon transformed the most basic recipe into a memorable culinary experience.

The LeMay Car Museum is astonishing, even for people like us with no knowledge of automobiles. Because of the storytelling behind the exhibits, the LeMay is universally appealing, not just fun for gearheads. The LeMay seems to exert its influence over the city—everywhere you’ll see people driving classic cars, and there are specialized garages for their maintenance, adding to the sense that the entire city is a cooperative project in preserving the past.

The Tacoma Art Museum (TAM) is a world-class contemporary art museum. We saw an exhibit of American portraiture and afterward spent time in the kid’s studio, where Ruby drew her self-portrait to be added to the collection. We were surprised to discover an entire upper floor of well-equipped art classrooms—the institution’s dedication to teaching sets it apart from other contemporary art museums. One of the teachers we talked with had taught a class in self-portraiture for blind students and was hanging her students’ work on the walls. New exhibits coming in January and February will include one featuring bronze animal sculptures and another on native portraiture.

The Museum of Glass is a monument to the Pacific Northwest’s contribution to glass art, as well as a representation of Tacoma native Dale Chihuly’s artistic legacy. The central architectural feature, an inimitable Tacoma landmark, is a conical tower sheathed in diamond-shaped steel plates rising above the museum’s galleries. Inside the tower is a hot-shop theatre, where ambitious glass projects are planned and created by a team of artists in a kind of workers’ ballet. We watched artists making glass sculptures based on the artwork of kids, producing a perfect rendition of a narwhal and passing out long, spiraled pieces from the remnants to the audience.

The Washington State History Museum is a series of rebounding arches springing from the sphere of Union Station. Its exhibits are widely varied and center on the The Great Hall of Washington History, an immersive path of larger-than-life dioramas which wind through the history of the state. Every winter it hosts a model train festival, and in February will open a traveling exhibition called TOYTOPIA—we may have to go back just to check it out.

The Tacoma Children’s Museum offers hundreds of hands-on activities for curious kids. It’s the perfect follow-up to TAM. There’s ample studio space for your child to put her artistic inspiration into practice.

Any two of these museums constitutes a full day. If your family is anything like ours, you’ll need extra time to see them all.

For that indefatigably creative kid in your life, follow one of these museum days with a visit to Tinkertopia on Pacific Avenue. It’s a crazy “alternative art supply” store dedicated to reusing remnants, scraps, blanks, overstock and other waste from local manufacturers and repurposing it into creative projects. It is well-organized and the activities, parties and classes so appealing you’ll wonder why every art supply store isn’t like this. The materials are basically worthless, but the community activities make the place hum with creative energy. On the day we visited, the store was packed with excited families building homemade robots from found components.

For dinner, visit Harmon Brewing Co., which sits along the row of museums in a brick building that still reads Harmon Manufacturing Co. in gigantic faded letters. Pat Nagle and Carole Holder decided to name their company after the building, celebrating the city’s history. The food at Harmon is fresh and delicious and the Point Defiance IPA is exceptional.

Tacoma Trip Planner: Day 2— Antique Row | Live Like the Mountain is Out

We set out for Antique Row on the second day. As we walked through town we noticed stenciled graffiti on the sidewalk. It was an outline of Mt. Rainier with the text: Live Like The Mountain Is Out. We didn’t understand what this meant until right before we left, when we overheard two locals talking at a restaurant.

“Do you think the mountain will be out today?” said one.

Tacoma’s collective preservationist impulse was apparent on Antique Row. Walking down Broadway, the sheer number of antique shops was astounding. It isn’t one or two, it’s an entire district. Some of the shops occupy multiple floors. Broadway’s Best Antiques, Sanford and Son Auctions, and Lily Pad Antiques are highlights. The area has something for every antique hunter, from upscale furniture from the ’40s to ’70s good luck trolls. As we rummaged, we fantasized about appearing on Antiques Roadshow. Most shops had just the right level of disorganization appropriate for concealing hidden wonders. The district showcases a century of abandoned bric-a-brac and treasure, as though the residents of Tacoma were unwilling to let anything go as the fate of the City of Destiny changed course. They would stubbornly hold onto everything for a hundred years until the city was ready to finally redefine itself.

For lunch we went to the Pacific Grill, the restaurant at the Courtyard Marriott. The fresh local seafood catch made for a wonderful braised salmon, paired of course with a Point Defiance IPA. The Pacific Grill had a good kids’ menu as well, and they accommodated our tired, cranky kids, worn out from antiquing all day.

Reserve at least a whole day for Point Defiance, especially if kids are involved. The route from the outskirts of the city to Point Defiance is perfect for runners—there’s a bike path which follows the coastline for the entire distance, affording breathtaking views over the water at every turn.

Driving to Point Defiance takes you along a circuitous route on the leeward side of a cliff, winding your way under elevated railroad tracks and through defunct manufacturing and shipping facilities arrayed along the coast. It’s a journey through the city’s manufacturing past.

The Point Defiance Zoo & Aquarium focuses on animals native to the Pacific Northwest. It seems less like a zoo and more like an extension of the local ecology. It was lightly raining, and the hardy musk-oxen seemed right at home. The undulant jellyfish illuminated in ultraviolet in the aquarium were like a Chihuly sculpture come to life.

Point Defiance Zoo has had a special role in the conservation of American Red Wolves. When that species hovered on the brink of extinction in the 1970s, it was the Point Defiance Zoo that coordinated with the U.S. Fish and Wildlife Service to craft a strategic plan for their survival. This long-range ecological preservation effort was one of the first of its kind in the United States. The exhibit of red wolves at the zoo is the highlight. 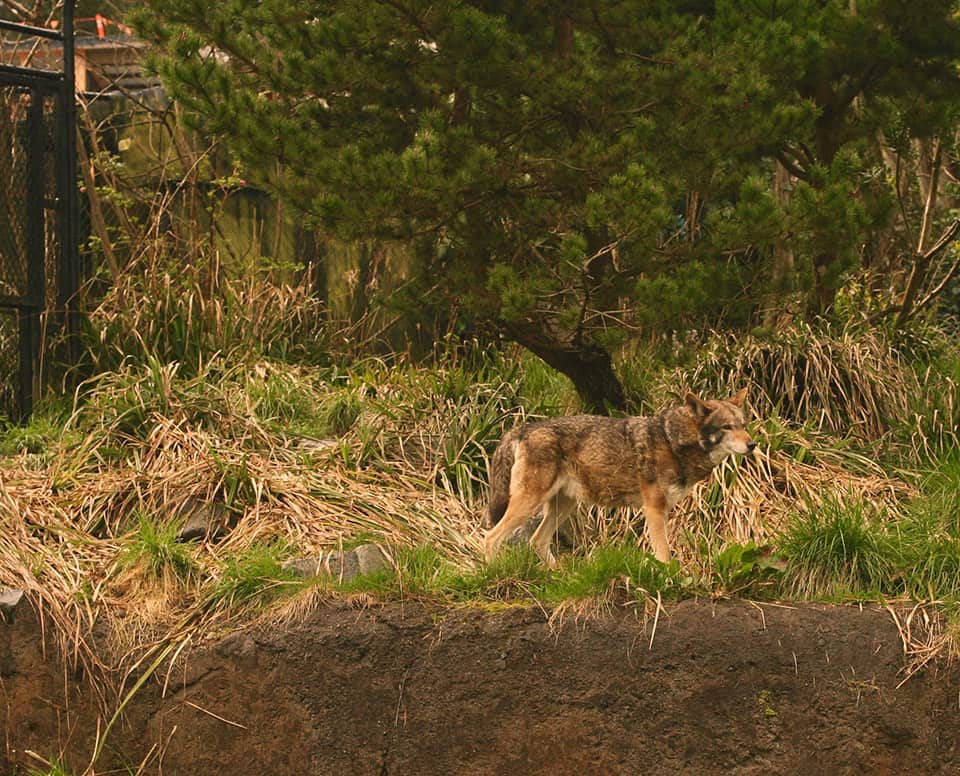 For dinner visit the Rhein Haus, a gigantic German beer hall that seems to have been teleported into town from another century and another continent. The cavernous space is lavishly decorated in an elegant Baroque style. The restaurant has indoor bocce ball courts and other games, and it’s the perfect setting for rowdy kids and rowdier adults, or a large party. It would be fun just to come to the Rhein Haus and drink beer out of the giant pewter beer steins and play bocce ball, but we stayed for dinner as well. With trepidation we tried the schnitzel, and were pleasantly surprised by the light, complex flavor.

As we left the City of Destiny, the cloud cover finally broke. The sky seemed particularly vivid, and for the first time on our trip we saw Mount Rainier across the water. It was an ordinary moment but seemed like a revelation, and we were reminded to “live like the mountain is out.”

Where to eat in Tacoma

Places to stay in Tacoma

Where to play in Tacoma