If you have to spend a chunk of your life working, it might as well be in a beautiful office space

THE AVERAGE PERSON spends 90,000 hours of life at work, so it’s important to get the design right. The best workplaces respond to their natural setting or neighborhood, and balance employee needs for natural light, comfort and connection. Here are four workplaces in four different industries around the state.

In 2015, the corner of 3rd and Washington in Spokane was easy enough to overlook—or avoid. The old brick building there had recently hosted Carr’s Corner, a dive bar known for its metal shows and the motto: “What happens at the corner, stays at the corner.” But Josh Hissong and Armando Hurtado, co-founders of HDG Architecture, knew a good thing when they saw the property go up for sale.

“As an architecture firm, we know that we can take anything from dilapidated to desirable, so for us it was a no-brainer,” Hissong said. At that point, the 1912 building was “a gutted, nasty, empty shell.”

“Any average developer was going to walk up and say, ‘Let’s scrap it,’ and put a drive-through Starbucks here,” Hissong said. “We didn’t want that because it is a neat, old building.”

The goal of the renovation was to “let the building be itself,” enhancing its character with tailored additions. Exposed ceiling joists and spruced-up brick reveal the original structure, while more than 2,000 square feet of new insulated glass admits light and connection to the street. The floorplan encourages collaboration, 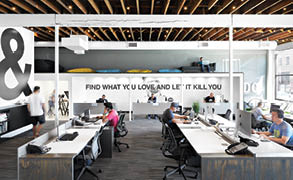 from the open space for desks, including Hissong’s and Hurtado’s, to the breakout area with laidback seating and a foosball table. The high-quality AstroTurf flooring there climbs the wall to a lofted area with beanbag chairs. Out back, a sketchy parking lot became a shared green space for the firm and the building’s other tenants. It’s hard to say what’s cooler: the felt-lined nap room with an “Occupied” light that lets employees catch some sleep while wrapping deadlines, or the annual firm-funded trip to Europe, wherein the entire twenty-person office leaves work at home for a week and strolls a foreign city together.

The building is on a main artery into downtown, with some 36,000 cars driving by a day, Hissong said, which also contributed to its early appeal. Since the overhaul, the façade has a new motto across its inky paint job that reads, “If not now, when?” More businesses have answered the call. Three more buildings on the block have gotten renovations since the firm moved in a few years ago. “It was an area that wasn’t quite cleaned up yet,” Hissong said. “So, we thought we could spark a rebirth of the neighborhood.”

YAKIMA: A fruit company thrives in an industrial setting

Washington Fruit & Produce has grown apples, pears and cherries in Central Washington since 1916, when Yakima County had more fruit trees than any county in the nation. The grower first shipped them via the Northern Pacific Railroad’s Yakima depot before switching to trucking. Proximity to the highway is what propelled the company to convert 90 acres of flat and featureless floodplain on the edge of town into its base of operations.

When it came time to design the company headquarters, architect Brett Baba, a Yakima native and principal of the Seattle firm Graham Baba, didn’t have much to work with. “Looking at it as a place to inhabit, it was bleak,” Baba said of the industrial site, noting its single redeeming quality. “If you look up over the industrial area and over the highway, you see the basalt cliffs, and they’re extremely beautiful. Other than that, there was no context, or outlook or anything.”

To start, the design team devised an L-shape building plan surrounded by earth berms and bordered by a perimeter wall that directs the eye up to the distant cliffs. The building’s exterior references a dilapidated barn—the only aesthetic suggestion offered by the client when he drove Baba to see one at the beginning of the process. “The thing I noticed about it was the skin was peeling off this building, so you could see the old structural elements inside—the knee braces and diagonal wood members and beams and columns,” Baba said.

Inside, soft lighting and acoustics take precedence, with natural light pouring in through the windows or offered via gentle uplighting designed by the firm. Carpeting, warm wood finishes and acoustic panels at the ceiling all buffer highway sounds. After all, Baba’s brief was to shield the office from its industrial surroundings.

“They’re concrete boxes, those warehouses. There’s a lot of asphalt. [The client’s] mandate to us was that he wanted something that was completely the opposite of that,” Baba said. “They wanted something much more warm, so it was about creating this quiet, serene environment in this industrial area.”

LYLE: A winery in the Gorge celebrates the local terroir

For eleven years, much of the day-to-day operations at the COR Cellars winery happened out of an old metal shop—everything from the wine’s fermentation, barrel-aging and bottling to the tasting room. The old building was perfectly functional, but fairly bare bones. In 2015, owners Luke Bradford and Meg Gilbert Bradford worked with Seattle firm goCstudio to upgrade.

A lot of times when people go wine tasting … they go, have a quick wine tasting, and then move on to the next winery. This is more of an experience. People want to linger.

Located on acreage in a Columbia River Gorge National Scenic Area in Lyle, the winery has sweeping views—and a lot of strong winds. “They really wanted to create a refuge from the wind, both for the people who are coming to visit and taste wine, and also for when they’re there every day working,” architect Aimée O’Carroll said.

The design solution was to organize everyday life at the winery around a protected courtyard. The tasting experience might not be quite as close to the production as before, but neither is it removed. The courtyard is wrapped with three new connected buildings, including a glass-walled tasting room, and exterior walkways are wide enough for forklifts. “This is a working winery, and they didn’t want to be too precious about things,” O’Carroll said.

Being within a designated scenic area meant any new construction needed to meld with the scenery, so the firm nestled the low-lying building into the hillside to minimize the visual profile. It has an earthy exterior color palette, with ebony-stained tongue-and-groove cedar siding. Nine-foot roof overhangs provide windbreaks and are lined with white-washed hemlock that runs inside as well, where the overall palette is lighter and the décor welcoming. Cozy textiles line a window seat that looks out to Mount Hood, and visitors are encouraged to sit by the fireplace

with a sample of the latest vintage, bring a picnic to the courtyard, or join the occasional communal dinner with local restaurant pairings.

For the eight employees at the vineyard, the difference from before “couldn’t be more night and day,” Bradford said. Same with tasting visits. “A lot of times when people go wine tasting … they go, have a quick wine tasting, and then move on to the next winery,” O’Carroll said. “This is more of an experience. People want to linger.”

Here’s what can happen: Rainwater falls onto the surface of a bridge, runs off the sides, hits the pavement below, and eventually trickles into the Puget Sound via Seattle’s waterways. En route, the water can collect toxins, such as oil from cars and copper from brake pads which, when deposited into bigger bodies of water, have been shown to kill migrating salmon and harm marine life like Orca.

A specially engineered, stepped rainwater collection system climbs the hill along the sidewalk up Troll Avenue, filtering 160,000 gallons of runoff a year before discharging it to Lake Union.

In 2015, a five-story commercial office building was being planned for the Fremont neighborhood of Seattle on a site bordered by Troll Avenue under the Aurora Bridge. When the developer learned about the dangers of toxic runoff, especially in this Fremont location, it moved to tackle the problem. “The Fremont cut is along some of the major salmon-spawning routes,” architect Myer Harrell said. “We saw it as a design challenge, but also getting into the engineering of it, saw it as a challenge to mitigate the stormwater.” Harrell is principal and director of sustainability at Weber Thompson, the architecture and design firm that worked with KPFF Consulting Engineers on the project.

Dubbed DATA 1, the LEED Gold-certified building now provides offices for the data visualization software company Tableau on the upper floors and almost 12,000 square feet of retail space at the street level. Tableau’s offices, in an interior buildout led by Gensler, enjoy walls of glass with striking closeup views of the bridge, a sprawling roof deck and an internal courtyard that blurs the boundaries between inside and out.

For the exterior, the project team maintained an approachable scale and familiar neighborhood touchstones. It stepped back the upper floors to avoid that “steep canyon wall” effect of a tall, looming façade. During construction, the developer relocated two popular restaurants from the site, Café Turko and Milstead & Co. Coffee, then brought them back into the completed building. “One of the things that we wanted to do is really focus on the streetscape, and the quality of life at the pedestrian level,” Harrell said.

As for what happens to that Aurora Bridge runoff now? A specially engineered, stepped rainwater collection system climbs the hill along the sidewalk up Troll Avenue, filtering 160,000 gallons of runoff a year before discharging it to Lake Union. And DATA 1 is just the first phase of the developer’s work in Fremont. A building across Troll Avenue, called Watershed, will aim for even higher goals, such as pursuit of the Seattle Living Building Pilot program and treatment of more than 300,000 gallons of bridge and street runoff.

Tags from the story
cool workspaces