Every remodel comes with its revelations. In 2011, a couple bought this floating home just a few slips down from their own, with the understanding that they would tweak a few fixtures and finishes to free the interior of its early ’90s aesthetic. (Think curved walls, glass blocks and institutional pink.) Upon finding water damage, however, the superficial makeover grew into a much bigger undertaking. “It was going to be a really light touch at first,” said architect Jim Graham of Graham Baba Architects, the firm that worked with the homeowners. Once the demolition started and the water infiltration was discovered, plans changed. “All of the walls were filled with mold,” Graham said. “ That’s when [the project] really ballooned into, ‘All right, let’s change everything.’” Faced with a much more extensive renovation, the homeowners decided to personalize every inch of the houseboat to their taste, starting with the façade. The original exterior was a mishmash of features. “It was extremely dated and, stylistically, it was a Franken-house,” Graham said.

He paired up with contractor Dave Boone to instill cohesiveness by swapping the kitschy green-painted shingles for streamlined horizontal cedar siding, inset panels of reclaimed barn wood and red-painted metal, and a stern wrapped in vertical zinc panels. “I wanted to make sense of the massing in a way that broke down the chunkiness of the box,” Graham said. Once the water damage was remediated inside, the team’s goal was to “clean up inefficiencies” and create the perfect backdrop for the owners’ creative decorative style. In the open-concept living area on the upper level, this meant first addressing the view. After all, the clients were moving down the dock for the new houseboat’s prime location. “It’s at the end of the dock so it’s not pinned in. It has this great outward approach where the view is so much better,” Graham said. “Those houseboats tend to be pretty hemmed in.

You have your dockside and your water side that’s open, but this one has three sides” fronting the water. A poorly positioned replace and stingy windows in the living area, however, were the de facto focal point. So the team replaced the entire wall with 18 feet of Nano doors. These now open to a deck encased with a sleek cable railing, ensuring unobstructed sightlines from the kitchen and the couch. Quirky additions, like a fire pole that connects the kitchen to the entry and a diving board off the deck, help to weave in the owners’ fun-loving personalities. Nowhere is this more apparent than in the artistic air of the décor. Whether it’s the striking Tibetan Buddha eyes painted on the exterior or the wall in the living room swathed in a photo mural of the marina, there’s art at every turn. “ The good thing is that it was full of mold,” Graham said of the houseboat’s transformation. “It gave us the ability to blow it all out, redo the plan, and clean it up.” And in the process, create a home that’s become the family’s work of art.

A Social Hub in Wards Cove 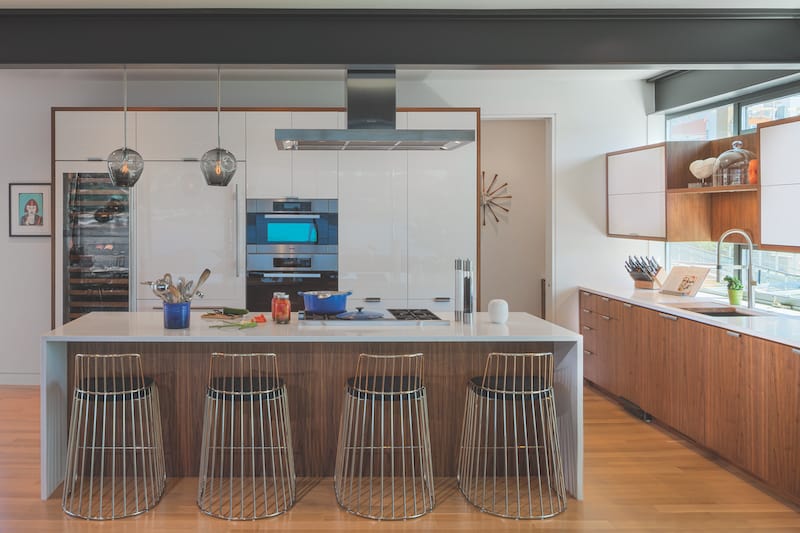 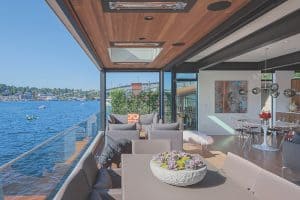 After a 2010 trip to Thailand, where Kevin Gaspari saw water-based communities in Bangkok, he became enamored with life on the water. This was a feasible pursuit in his home city of Seattle. “Houseboats are quintessential Seattle living,” said Gaspari, who works as a Realtor. In 2012, he and husband Kent Thoelke purchased a slip in Wards Cove, a former salmon processing center on Lake Union that was converted into a private marina with twelve houseboat moorings, just across the waves from Gas Works Park. “We heard about Wards Cove being built, and it was supposed to be the last dock space available to build floating homes, so we pounced,” Gaspari said. The couple then teamed up with architect Brian Brand of Baylis Architects and Trend Construction to create their ideal modern floating home, which would depart from the look of Seattle’s early houseboats. “ They started as logging shanties for the timber industry. People would build their houses on the logs and move them around the lake as they cleared the timber,” Gaspari said. “We wanted a more modern aesthetic.”

Since there were height and width restrictions for the structure, it was “basically a cube,” said Brand, who endeavored to “break the box up a little bit” with a medley of metal and fiber cement panels, and cedar siding. Inside the main living area, there are no structural walls or columns, so a series of 30-foot steel beams provides the framework and sets the tone for the materials palette. Warm oak floors offer a counterpoint to the steel, and strategic window placement pulls the focus to the view outside. In the kitchen, walnut and white polyester-finished cabinets seem to float against the glass, while an entire wall of floor-to-ceiling glass doors overlooks the lake. The couple decorated the interior themselves. “I sell real estate, so I’ve been in lots and lots of homes. I’ve just picked up what I think looks great and works for us,” Gaspari said, describing their approach as “modern without being cold.” Classic Mid-century furnishings deliver striking silhouettes, while careful doses of color and pattern, such as the powder room’s bright orange sconces and inky wallpaper, personalize the scheme.

Life on the water has its share of surprises, chief among them the amount of lake traffic that cruises by on a daily basis. The calls of the morning crew team could act as an alarm clock, Gaspari joked. “There’s always a moving view and it’s always really interesting to me,” he said. “It almost feels resort-like, like a vacation when we come home.” This is compounded by the ease with which they can entertain on the new houseboat, thanks to a roof deck and the indoor-outdoor flow, which has prompted another happy discovery—their tight-knit neighborhood community. “Our neighbors are fantastic,” said Gaspari, citing trips to Napa to bottle wine together (under the label Four Floats) and regular barbecues. “As a Realtor, I’m always ready to sell or buy, but I think this will be our forever home,” he said. “ This is so unique that we wouldn’t want to leave it.”

Washington Home and Design: A Modular Home on the Kitsap Peninsula