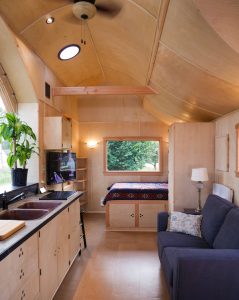 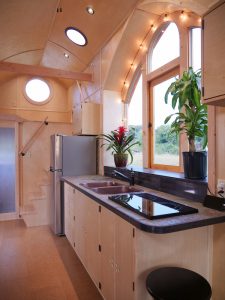 Twelve years ago, Abel Zyl was walking in his Olympia neighborhood when he saw an 84-square-foot house parked in a backyard. Its owner, he learned, was Dee Williams, a local advocate for minimalist living and the tiny house movement, who had designed and built the abode herself. When Zyl bumped into Williams at the food co-op some time later, he told her she had inspired him. “I ran into Dee, and I mentioned that I kind of wanted to build my own tiny house,” Zyl recalled. “She was like, ‘Kind of want to? You should do it.’” So, he did. The small-scale construction project presented a fun creative challenge to Zyl, who had previously worked as an electrician and house remodeler and also studied boat building in college. He pieced together his first design from an array of found materials—including salvaged wood, the remnants of his senior year boat project and objects picked up in dumpster dives. “I’ve always had an eye for free piles,” Zyl said. “My friends would laugh because I can spot a free pile from a mile away.”

With its cedar shingles and red-framed windows, his first house looks like a simple cottage, but there are hints of the aesthetic that he would hone for future tiny house commissions, including a handmade “moon window” and arched roofline. That first project still sits on his property, a 34-acre farm outside Olympia that hosts his workshop. There, he’s built around thirty tiny homes under the company name Zyl Vardos. Each design is as unique as its owner, yet still evokes his distinct style. It starts with a pencil sketch that gets refined via 3D-modeling software. The software enables him to “snap the lines of the house o the pencil sketch,” he said. He then uses a CNC (computer numeric control) machine to create patterns and cut parts for his imaginative shapes. “Because I use a CNC and a computer to design, I can make parts of any shape. ey give me this really great creative flexibility,” he said. He then builds many components by hand, from the doors and windows to porch lanterns and wood dryer vents. His work has been called “whimsical” and “like something from a fairytale.”

While those are apt descriptors, his designs always combine artistic flourish with practicality. Take the Damselfly, a home built in 2017. For it, he composed a roofline that appears as two pieces cascading over each other, like a breaking wave. Thirteen handcrafted windows, including a curved design over the kitchen sink, let in lots of natural light, and the pale-colored cabinetry, walls and cork floor don’t clutter the eye. Features like hidden drawers and cubbies in the stair tread, and a sliding Shoji screen door at the bathroom, save space. “My approach is not to lose track of what feels inspiring and functional,” Zyl said. “I try to always bring those two together.” Much of his inspiration comes from his clients, whom he refers to as “co-authors” in the design/build process. “It’s always about people,” he said. “I’ve been pretty fortunate and met a lot of amazing people.”

Wenatchee: An adventure wagon takes a Washington couple to their new life 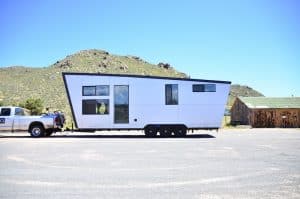 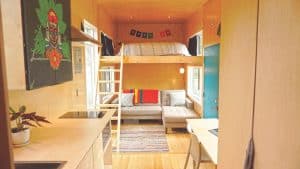 If you visited a national park out west last summer, you might have seen Du Bangs and Ashley Rodgers. The couple took an epic 11,000-mile road trip all over the western half of the U.S., hitting as many national parks as possible over three months. Starting in Seattle, they drove east to Chicago, then backtracked through the Grand Tetons and Yellowstone, dropping as far south as Zion and Joshua Tree. What made them stand out from other cars on the road? They towed their 28-foot-long, 13,000-pound tiny home, aptly dubbed the “Adventure Wagon,” the whole way. e road trip was a reset for the Seattleites. “We were just ready for a change,” Bangs said. “We were ready for that next step and we also wanted to do some traveling.” Early in 2017, the couple sold their city condo, then designed and built the tiny house as a prototype for their company, Modern Wagon. “As an architect, I thought it would be a great design project,” Bangs said. From the start, they weren’t interested in allowing the notion of tiny to dictate the home’s interior.

“It seems like a lot of tiny homes are traditionally a home shrunk down into a smaller space,” Bangs said. “So, I feel like all the pieces get shrunk with that as well, such as the sink and appliances. Something like the bathroom becomes a very tight space.” Their approach was different.“It was an exercise in picking out the amenities that were most important to us and maximizing those spaces,” he said, “then letting the envelope and form of the tiny home evolve around that.” To that end, the couple identified priorities, such as a full-sized bathtub, washer/dryer, plenty of countertops for meal prep, and an open floor so Rodgers can roll out her yoga mat. Then the different areas were laid out for ideal weight distribution along the trailer bed. Final tweaks ensured the home achieves the modern look the couple prefers and still feels roomy in its 270 square feet.

Slanted front and rear walls cut a sharp silhouette and also increase headroom, most importantly where the sleeping loft is stacked over the couch. “We wanted to be able to sit up [in bed] and not hit our head on the ceiling,” Bangs said. They lined the exterior and roof with charcoal standing-seam metal, which provides a nice contrast to the white aluminum plastic composite siding. Large windows and an interior palette of bamboo floors and light birch plywood further visually expand the space. After logging many miles on the open road, the couple now calls Wenatchee home, where Rodgers is a social worker and Bangs leads his architecture firm modFORM. For it, he’s been tapped to design a few compact Detached Accessory Dwelling Units (DADUs). “ They’re not on wheels but it’s a very similar design exercise,” he said. “It really allowed me to bend my whole design genre.”