In this Woodinville house built in 1986, the impetus for remodeling the kitchen wasn’t just its cramped work triangle and dated finishes. The homeowners were equally motivated to tackle an adjacent room—a large sunken family room everyone in the household had abandoned. The room’s awkward layout, cold stone floor and lack of natural light made it uniformly unwelcoming. “All the way in the back of the house, separated by columns and a step was this sunken family room,” said Heidi Caillier, a Seattle-based interior designer in charge of the home’s 2017 overhaul. “They never used it, just because it felt so disconnected from the rest of the house.”

Caillier’s design plan was a bold redress: to flip the first-floor layout and swap the kitchen into the unused space. Now, a more generous eat-in kitchen segues into a relaxed dining area and cozy family room. “They really wanted something that was more open, a joined area that felt like it all flowed,” Caillier said. Such an approach was not without its challenges, from reconfiguring windows, relocating plumbing and raising the floor, to devising an efficient floor plan. “It was tricky trying to figure out the layout,” Caillier said. “No matter what we did with it, it was still going to have an L-shape that you can’t really change without changing other significant parts of the house.” Her solution was to incorporate a butler’s pantry and eating nook along one wall, ensuring that every inch of previously wasted space is put to good use. 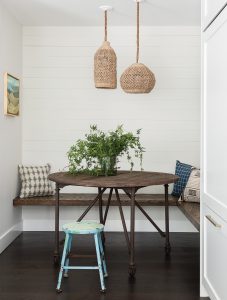 Now, the 450-square-foot kitchen is grounded by a 10-foot-long island packed with storage on both sides, its warm brown-black color silhouetted against white perimeter cabinets. “We knew that it was going to be the anchor of the room and where everyone would gather,” Caillier said of the island. A snowy Caesarstone counter climbs up the backsplash for a seamless look. Brass cabinet hardware and lighting punctuate the cool color palette while wood accents, including dark-stained oak floors, a sliding wood door on the pantry and floating bench, offer understated texture that mingles well with the traditional elements. Painted shiplap wraps the breakfast nook, keeping it light and bright. “I just wanted it to feel a little bit cozy and textural, while working with the rest of the space,” Caillier said.

Caillier juxtaposed playful personality suitable to a family with young kids via a few more stylish steps. “It’s a big kitchen, so I felt like we needed to mix the finishes up a little bit to make it layered and interesting,” she said. The cement tile backsplash at a drinks station lends a hit of contemporary pattern. Woven pendant lights skew whimsical, the pattern giving off a fun glow at night. “I love the kitchen nook; it’s probably my favorite part,” Caillier said. “I like that it brings down the seriousness a little bit.” Even better is how her redesign has transformed the household’s former dead zones into family destinations, revitalizing the home in the process. Said Caillier: “It’s changed the way they use their house.”

DIY Hygge for the Washington Home

Washington Home and Design: A Modular Home on the Kitsap Peninsula