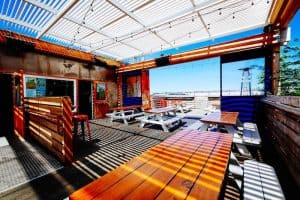 Craig Christian has a casual answer for why he won’t rent out his taproom for private events. “It would just be about the money, and that’s not why I’m here,” he said. That shows you what his bones are made of. A group of fiercely loyal regulars who form the pulse of the taproom, even on a typical drizzly Seattle day, matter to him in a way that speaks volumes. “All on their own they started a Facebook group called Rooftop Regulars,” he said, smiling like a proud parent putting an aced exam on the fridge.

Christian has instant likability that you feel the second you meet him. It’s not just his disarming transparency, his quiet humility, or the way he creates a community wherever he goes. What reminds you—more than anything—that the owner of Rooftop Brewing is the sort that you want to run in the same circle with is how, even when he tries, he can’t talk about himself or his accomplishments for more than a few moments without turning the spotlight on someone else he adores. Maybe it’s the way Ladro coffee roasts their beans, or how Counterbalance Brewing is raising money for charity through the Beer Trumps Hate campaign (the one Christian started), or the way the food from the Vietnamese food truck that makes the rounds at Rooftop pairs so well with beer.

“I put a roof deck on an A-framed Tudor-style house that had no business being there,” Christian said of Rooftop Brewing’s origin story. In reality, it all started in London decades ago. Before he was of legal drinking age in the United States, Christian found himself in the heart of the UK with a desire to learn how to brew and a country that was ready and willing to teach him. Is it that he learned to make beer in the hallowed ale-soaked terrain of England that makes his beer so good? Is it the multiple degrees in science that make it so consistent and flawless? Maybe. Or maybe it’s some other unidentifiable quality that keeps the awards coming and the fan base growing. But the “why” of it all doesn’t matter once you’re up on the rooftop of Rooftop with that cold Stargazer IPA in your hand. Don’t forget to grab a banh mi sandwich while you’re there. Christian will be the first to tell you how amazing they are.