On a lazy Sunday, you sit on the sun-dappled patio of Brimmer & Heeltap, a tucked-away gem between Seattle’s Ballard and Fremont. Cascading hibiscus dances in the breeze. Light slants into this secret garden. This is one of those meals that will linger long after your last bite. The true star of the show, without a doubt, is the Washington salmon. Diners are spoiled by the myriad ways in which this fish shows up on their plates in almost any season. At Brimmer & Heeltap, chef David Valencia reaches back to his roots when preparing Alaska salmon aguachile, a popular option among the eatery’s loyal patrons. “I grew up eating ceviche and aguachile [a cold seafood dish, traditionally served with shrimp] with my uncles at Mariscos Chihuahua, a local restaurant in Arizona,” he said. “ The acidity, raw onion and spice bring me right back to those warm days eating out of a cocktail glass in the parking lot.”

Brimmer & Heeltap works with Mikuni Wild Harvest, which in turn sources from Jones Family Farms (JFF), a family-owned and operated business producing grass-fed meats and shellfish on Lopez Island. JFF also sources and distributes fine-quality Northwest seafood. Kevin Mock, sales associate for Mikuni, explained the allure of working with JFF. “They’re directly in contact with the producers, fishermen and farmers in their area,” he said. “ They know the families, their stories, their industries, their struggles.” JFF has participated in sustainable practices of Puget Sound and Alaskan wild salmon for many years. “Due to recent inconsistencies in salmon runs, increasing costs and our changing business needs, we have cut back on our commercial fishing efforts while partnering with local, long-standing, quality-oriented sherman to maintain a fish supply. In order to assure the highest quality salmon, fish are bled, dressed and iced immediately and handled with care.”

Mock said the salmon tastes clean and fresh because it doesn’t have far to travel. “By eating that fish,” he said, “[diners are] supporting the local fishermen of the Salish Sea, who are the stewards of our local waterways.” JFF offers fresh salmon from May through late November—and frozen and smoked salmon year-round. As the basis of its own fishing operation, Fraser River Sockeye became the family’s first love. “Since time immemorial,” these fish have passed through the San Juans, and islanders have depended upon their bounty. The Joneses purchase as much as possible from Jack Giard, a Lopez Reef net fisherman, and Dan Post and Arn Veal, gillnetters from Lopez and Guemes Islands. “ The Fraser fish are unlike any other sockeye; there is poetry to their flesh and we revere them as the historic lifeblood of our island community,” the JFF website states. “ These fishermen also catch Fraser River pink salmon on odd years. These fish, too, are particularly lovely.” The company gets the bulk of its local Coho from the Finkbonner family, who catch the fish in Lummi nation waters. Because the fish feed primarily on crab larvae, the fish taste more like lobster than other salmon. 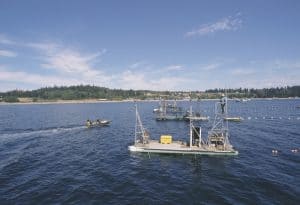 About 35 miles north of Seattle, Tulalip Resort Casino’s Blackfish is well-known for its signature preparation of the heritage salmon (AKA salmon on a stick). “It is based upon a time-honored and proven tribal technique for cooking salmon on sticks over alderwood coals,” chef David Buchanan explained. “We leave the skin on the salmon and use ironwood sticks to skewer the fillets—running the sticks tightly between skin and flesh.” After the fish has been seasoned, the sticks are angled over the coals. According to Buchanan, this slow-roasting method draws out the fish’s natural oils and lends a hint of smokiness to the flavor. Blackfish always serves wild salmon (never farmed), sourced primarily from Alaska and Washington.

“The salmon on a stick preparation both reflects and maintains a portion of tribal history,” Buchanan said. “There is so much more here than just a piece of fish for dinner. It is about tradition, respect for Mother Earth, thankfulness and sharing with friends and family. A tribal member finds the ironwood locally by foraging for it in the wild. It is actually cut from oceanspray, which is indigenous to our area. A prayer of thankfulness is offered to the plant before harvesting only what is needed. He then hand-carves each stick.” Similarly, an annual celebration honors the salmon for providing sustenance and expresses gratitude for those who have harvested and prepared it. As part of tribal tradition, any salmon that falls from the sticks can’t be served. Instead, this piece of fish gets offered to ancestors by “feeding the fire.” “All these things are important to the culture of the tribe, and we have the opportunity to keep a portion of this culture alive every day,” Buchanan said.

Valencia said his favorite way to prepare salmon is “smoked, low and slow.” “Buy fresh!” he advised. “And don’t be afraid of three things. One—season generously with kosher salt. Pepper the salmon after it is cooked so the pepper does not scorch during the cooking process. Two—heat your pan before you cook the fish, giving it a better sear. Three—eat it pink in the center.” There’s no denying that salmon from this region has made a name for itself—and for very good reason. “I think what makes it delicious is that it is a part of the Seattle culture, and, when I think of [salmon], I cannot separate the city from the fish,” Valencia said.

Point Roberts: The Place at the End of the Line