Kristin Allen-Zito has traveled all over to play her music, both as a solo artist and as a member of the mid-2000s electro-pop-rock band, The Trucks.

Everywhere she’s been has made her more appreciative of the town where she grew up. She calls her new EP, Bridge, “a long-distance love song” to Bellingham.

“When I started touring, I felt both exhilarated by the new places I saw, and more romantic about my hometown,” Allen-Zito said. “These songs call to the places that I find most romantic in the world.” 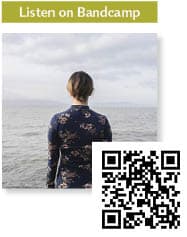 Allen-Zito’s roots in Bellingham’s creative scene run deep. She grew up writing songs and playing music there, and her mother was a folk singer who took her kids on the road to performances in schools all over Washington. Allen-Zito was 8 years old when she and her sister wrote their first song together, in the back of the car on the way to one of their mom’s gigs.

Eventually, the sisters started their own musical projects, and Allen-Zito ended up fronting The Trucks, one of the best-known bands ever to come out of Bellingham. But after a whirlwind half-decade of shows and success, The Trucks ended and Allen-Zito returned to her folk roots.

“It gives me a different kind of connection to the audience,” she said. “Playing acoustic music invites the sound of the room into the songs along with the listeners. There’s more space for silence and stillness.”

Indeed, the songs on Bridge feel intimate and personal even when their arrangements bloom into lush baroque-pop finery. At their core, they revolve around Allen-Zito’s winsome melodies and plainspoken lyrics, backed by well-plucked guitars and augmented by a tiny orchestra of keyboards, strings, banjo, accordion, harp and more.

The EP comes a full nine years after her last full-length album,  The Atlas, but in Allen-Zito’s mind, there isn’t much aesthetic distance between the two releases. More prominent on Bridge is the sound of time lapsed, of years spent writing and singing and playing, and of the kind of experience and maturity that teaches you to celebrate imperfections.

“Weirdly, Bridge feels like a continuation of The Atlas for me,” Allen-Zito said. “I think I’m a little less precious about songwriting now. I’m more eager and willing to leave room for mistakes.”