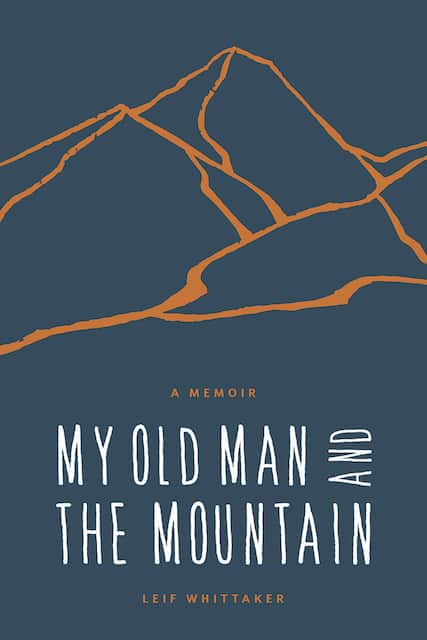 Growing up in Port Townsend, Leif Whittaker wasn’t just another outdoorsy kid. His father was “Big Jim” Whittaker, the first American to summit Mount Everest in 1963. In his book My Old Man and the Mountain, Leif Whittaker describes the experience of growing up in an extended family of mountain climbers and under the weight of the constant question, “Are you ever going to climb Mount Everest?”

In 2010, Whittaker surprised himself by enthusiastically saying yes to an opportunity to climb the mountain, and did so again in 2012. His book is an exploration of life in a famous, daring family and of carving out adventures of his own.

Your memoir talks a lot about family dynamics and the challenge of growing up in your father’s shadow and in a competitive family. How did you balance that honesty with your family’s feelings?

It’s delicate. I think that you have to be honest and say what you want to say and tell the stories as you remember them. I haven’t had any bad response from any of my family, even if it was something I foresaw and was worried about. I was worried about that, but you know, after  my family having read it, they’ve been so wonderful in their responses. They say, ‘I felt the same way!’ or ‘I was such an asshole to you, sorry about that!’ Even some of my cousins have said, ‘Leif, you put on paper what I have grown up with—people asking me if I was going to climb Mount Everest.’

Your dad must have known that you heard that question and felt that pressure.

Oh yeah, and he tried to shield me from it as much as he could. In retrospect, it really obviously has strongly affected me. But some of those things are natural. People aren’t trying to be mean or put pressure on you, it’s just what comes into their heads. I even hear myself doing that to some of my younger family members—now I’m that guy!

One of the cool things about your book is how easily you mixed your dad’s history with your present-day experience. Is that how you think of your climbs?

When I was climbing Everest, it was so much about revisiting that history. As I was climbing, I was always thinking about those stories, reading my dad’s journals or reading Tom Hornbein’s Everest: The West Ridge or reading James Dobson’s A Life on the Edge. So I was steeped in stories and history and we’d, for example, be climbing the Khumbu Icefall and I’d be thinking of Jake Breitenbach (a 25-year-old American who was killed in the Khumbu Icefall on Whittaker’s father’s 1963 expedition), and thinking about what climbing through it was like fifty years earlier. I always had this idea of weaving those two threads together because it was so closely interwoven in my own mind when I was climbing.

In reading the book, I couldn’t get over the sheer number of people going up Mount Everest today. Where do you think all that leads?

I don’t expect there are going to be any limitations put on the number of people that will be climbing Mount Everest, because it’s a profitable industry for the Nepalese government and for people in Nepal, so there’s not a whole lot of incentive to reduce the numbers up there. But it should happen, and I think a way to manage the number of people up there would be for most of the guide services to get together and start to plan a little bit better so not everyone is going on the same day and not trying to summit Mount Everest all at the same time. But that’s challenging too, because you all want to be up there on the nicest day, when weather’s good, and I can see that being really difficult to organize.

What’s next for you?

My next book is called My Old Mom and the Sea. She’s fine with it, the title is her idea. It’s going to be a mother-son memoir about sailing the South Pacific. When I was 11 years old, we sold everything we owned and moved onto a sailboat and for four years we sailed the South Pacific. This would be the story of that sailing trip. I left out a lot of those stories in this book because I was saving them for the next one.