This fall, Washington jazz luminaries Jay Thomas and Oliver Groenewald will release a new album, I Always Knew, powered by Groenewald’s “little big band,” NewNet. It took a confluence of circumstances for the work to even exist. First, the two had to meet many years ago, when Groenewald, a native of Germany, was engaged in post-graduate work in the United States. Then, five years ago, Groenewald—a trumpeter, composer and arranger—contacted his old friend Thomas about gathering players to perform some of his works. Thomas—one of Seattle’s nest saxophonists—called the “best guys in the area,” he said, and jumped at the chance to play Groenewald’s music.

“I love Oliver’s arranging so much,” he said, “and I have been thinking on an ambitious project for some time.” Thomas’ father had been encouraging him to do an album of ballads, he said, and with Groenewald on board—as well as his elegant arrangements that give sturdy American jazz some effortless European flavor—it seemed like the time was right. “(With ballads), the trick is to have it be strong and exciting as well as lyrical and soulful, with sections that are faster and higher and louder,” Thomas said. “I chose some songs that are lesser known because I love them.” Thomas, Groenewald and the rest of NewNet spent a couple days recording at Robert Lang Studios in Shoreline. “ The old-fashioned way,” Thomas said. 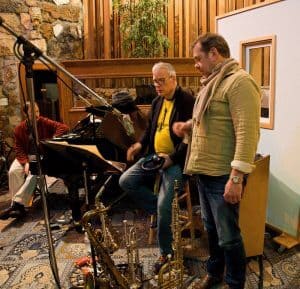 “All in the same room and no headphones.” The result is twelve tracks of sumptuous, swinging jazz, including Dexter Gordon’s “Ernie’s Tune,” Hoagy Carmichael’s “Stardust” and Duke Ellington’s “Blue Serge.” All but one are arranged by Groenewald, who also contributed a couple original songs. “ The tapestries of sound that Oliver constructed are amazing and unique and different, like Gil Evans mixed with Stravinsky, and never interfering with my train of thought as an improviser,” Thomas said. “ They sound mature, and the music has a vibe that is a result of the band’s collective experience, and of course a love of the music, respect for each other and the joy of creating something new together.”