In 1972, Rick Fogel published a master’s thesis in the journal Nuclear Physics with a weighty title: “Measurements and Analysis of the 14N(d.n)150 Reaction at a Deuteron Energy of 5.16 MeV.”
And with that, he was on his way to a career in science. Fogel worked at the Pentagon for two years, but the work wasn’t satisfying.

“I decided I didn’t really didn’t like working for the Defense Department,” Fogel said. “So I quit that job and started playing the dulcimer on the streets of Washington, D.C.”

The physicist-turned-artist first began learning how to play and build hammered dulcimers in Charlottesville, Virginia. He said he found he could make as much money busking as he was earning as a physicist. Fogel grew up in Maryland, but moved to the Pacific Northwest in 1988. In Seattle, he founded his music-based business, Whamdiddle Dulcimer Company, and has performed all over the country. He continues to entertain crowds as a busker, typically playing on the streets of Seattle and La Conner several days per week. He is known for his ability to play three hammered dulcimers at once, covering seven octaves. He’s performed around the country at countless festivals and venues, including the Seattle Symphony. He was also featured on the PBS series Craftsmen of the World.

These days, Fogel is something of a legend as one of the only builders of concert-grade hammered dulcimers in the U.S. and one of the few crafters of “bones,” an ancient rhythmic instrument.
Bone Dry Musical Instruments, a supplier of hard-to-find bones and musical products, touts Whamdiddle bones as handcrafted from domestic and exotic hardwoods by a physicist. “This winning combination of top-grade material, brilliant artistry, and scientific expertise explains why Whamdiddle bones sound as good as they look.”

Fogel said his philosophy of instrument building is that exceptional instruments are born from a craftsman well-acquainted with performing.

“As a performer-builder, I strive to integrate ideas learned in performance into the designing and building process because I believe that these significant details are the difference between an adequate instrument and an extraordinary instrument.”

According to The Smithsonian, the name dulcimer comes from the Latin and Greek words “dulce” and “melos” which combine to mean “sweet tune.” In Greece, the dulcimer is known as the santouri and in India, it is called a santur.

Hammered dulcimers are played by hitting the tuned strings with wooden hammers, which Fogel also makes. 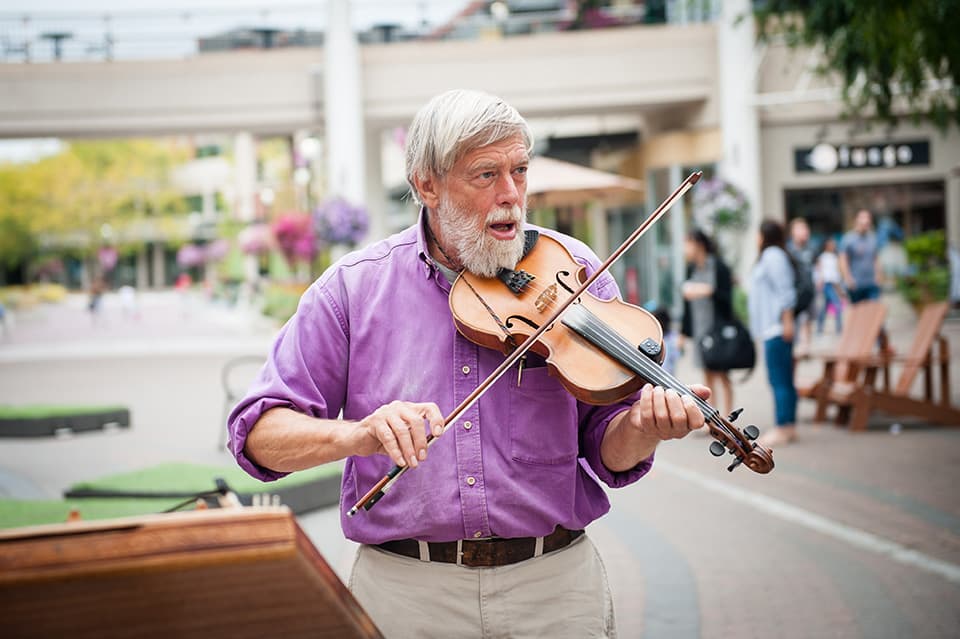 Dulcimer fans can buy Fogel’s recorded albums and listen to music, as well as peruse his products such as dulcimers, hammers, sculptures and more from his website.
He also sells a variety of books, including Physics, Music Theory and the Hammered Dulcimer, a publication he said he wrote while living in a tent one winter at Point Couverden on Icy Strait in Alaska.

Just when it seems he may have done it all, Fogel is busy channeling his creativity through innovation once again with a new form of entertainment—and the crowds are eating it up.
He said a friend from Spain recently gave him with a handcrafted “limberjack” or “jig doll,”—a wooden doll with loose limbs that appear to dance on the end of a board or platform. Fogel’s doll is painted to appear as though the doll is wearing a tuxedo. Of course, he took his limberjack setup a step further than the norm.
“I arranged for it to be played with a foot pedal while I play the dulcimer,” he said. “I can’t believe it. It’s been wildly successful. I make about six times more in tips while busking with the limberjack.”