Seattle Reign FC’s Lauren Barnes never seems to stop. When she’s not suiting up at Memorial Stadium for the Reign, she’s across the world playing, improving and coaching her brand of stifling, physical defense.

Barnes was the National Women’s Soccer League’s defender of the year in 2016. The NWSL is a ten-team league that launched in 2013 after the U.S. Women’s Soccer team won the Olympic gold medal in 2012. The existing Women’s Professional Soccer folded that same year after two seasons.

In the off-season, many teams have players follow training programs. For Barnes, 27, it’s not hard. For the past three years, she’s played in Australia’s W-League for Melbourne City. The league is three months long and fits well with the NWSL’s off-season.

“I think game fitness is one of the hardest things to gain back, unless you’re actually playing games,” she said. “That’s why we play a lot of eleven v. eleven during the preseason. It allows us to switch positions, try different systems. It helps us get fitness.”

A four-year starter at UCLA, Barnes has played professionally and internationally (Barnes played for the United States national team at the U-15, U-20 and U-23 levels and was briefly called up to the national team in 2016) soccer can lose its luster. “It’s a rollercoaster, for sure,” Barnes said. “You love it one day, and you hate it the next. But it’s still one of the best jobs in the world. I get to say fit and hang out with my best friends and be competitive. There’s nothing more I could ask for.”

Barnes and her teammates practice every day save one. Twice a week they double up with a weight training. On a typical day, players arrive for practice at 9:45 a.m. and leave around 1 p.m. The routine is the same when she’s playing in Australia.

On her days off, Barnes does yoga or swims. “I love to swim because it’s not impact. It feels good on the body, particularly the joints,” she said. “Playing on turf and running, soccer is more physical than people actually realize. You can really get beat up, so swimming is like getting therapy. It’s a little bit of cardio and a little bit of relaxation.”

She and her teammates recently started doing Pilates. “It’s one of the hardest things I’ve ever done,” Barnes said, laughing. “It’s so, so different from what I’m used to, but I’m loving it.” 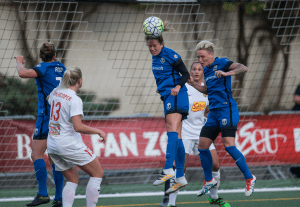 Along with teammates Elli Reed and Beverly Yanez, Barnes started a vegan diet about two years ago. At first it was challenging, she said.

And while being a vegan can be difficult, Barnes and her teammates indulge. “We are burning so many calories, and we really enjoy food,” she said.

Barnes sees herself staying in soccer in some capacity over her career.  Feeling burned out in 2012, Barnes took a year to coach at UC-Riverside. “That helped me check that off,” she said. “I don’t want to be a coach. It’s not for everybody.”

Instead, she enjoys independent, one-on-one coaching for its personal connection and improvement over time. More than anything, Barnes wants to keep playing as long as she can.

“Our lifestyles are different than just a normal routine life,” she said. “There are a lot of sacrifices you have to make and a lot of pain you have to push your body through. … We put our bodies on the line every day for, financially, not much in return.” ~~~

Tags from the story
sports