As newcomers continue to swarm Seattle and high rises replace historic storefronts, it’s easy to forget the city’s incredible history—Chief Seattle, the Great Sea le Fire in 1906, the Sonics. For newcomers and Seattle natives alike, Skid Road should be required reading. First published in 1951 and written by Murray Morgan, the book, “an informal portrait of Seattle,” tells the city’s story through witty character studies. In March, the University of Washington press re-released Morgan’s Skid Road, with a new introduction from longtime local journalist Mary Ann Gwinn. “It’s a really inspired idea for the University of Washington Press to reissue it,” Gwinn said. “I consider myself a relative newcomer, but I have been here since the ’80s. A lot of people have been here for maybe a year or two. Skid Road is a great place for people to start when they want to learn more about their new home. It will not be a chore.” Gwinn, who won the Pulitzer Prize in 1990 for her coverage of the Exxon Valdez oil spill, worked at The Seattle Times for thirty-four years, eighteen of those as the book editor. Gwinn picked up Skid Road long before she became the Times’ book editor, though.

Part of the genius of the book is that it’s a character study of several people who were instrumental in Seattle coming together. Characters are the heart and soul of the book. 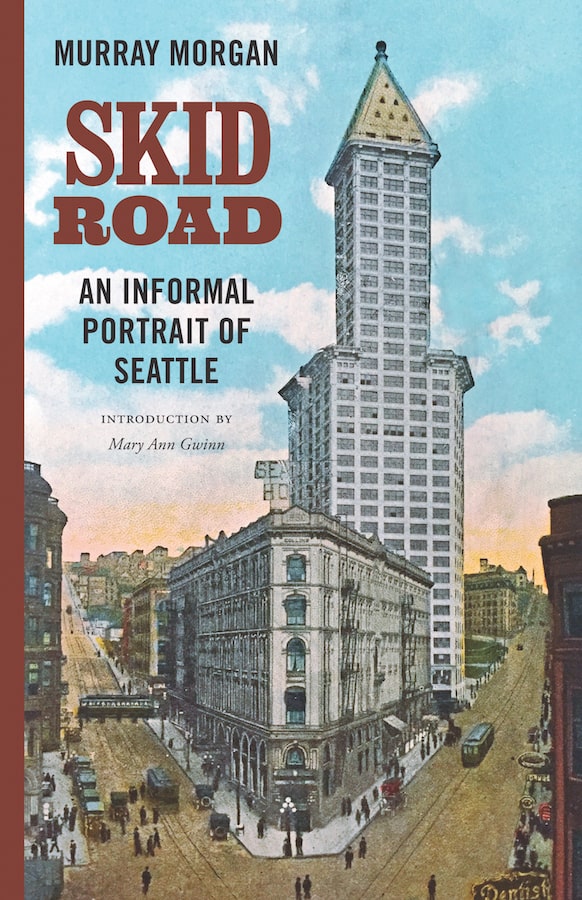 How did you come to first read Skid Road?
I came to Seattle in 1983, and I really didn’t know a thing about it. My first newspaper employer had laid off about a third of the staff, and I thought, ‘Oh, I need to find another job.’ I had a friend who worked at The Seattle Times, and so I came out here, and I got here in February. It was just dark, and the city was strange, and I thought, ‘What have I gotten myself into?’ I asked a colleague at the paper, ‘Can you give me a recommendation for a book, a work of history that explains this place?’ And he said, ‘You need to read Skid Road.’ He directed me to the Ellio Bay Book Company, and that was the beginning of a long relationship. I went down there and sat down and read it and I was just enthralled. It made me feel like I came to the right place after all.

What are favorite bits of history in the book?
Part of the genius of the book is that it’s a character study of several people who were instrumental in Seattle coming together. Characters are the heart and soul of the book—and Doc Maynard has got to be the main character I love. I can’t believe no one’s made a movie out of this guy’s life. He was a frontier doctor, he was a lawyer, he was a real estate impresario—not a very good one, because I think he lost most of the money he made by the end of his life—most interestingly to me, he was really probably the best friend that Indians had among the white people. He was just an interesting combination of a visionary and a goofball, and I love that about him. Every character Murray Morgan picked was in some respects a kind of outlier or misfit.

Why do you think Skid Road has stood the test of time?
One thing it has going for it, other than that it’s never been out of print, is that I think Murray Morgan’s sensibility was really progressive for the time. He was born and raised in Tacoma, but he had been all over the world. He got a master’s degree at Columbia University in journalism, and he was in New York when Pearl Harbor was bombed so suddenly he was working all these jobs at a radio and at a newspaper. He and his wife, Rosa, traveled extensively all over the world. During World War II, Murray served in the Aleutians, and when I was researching him, I found he wrote great letters that his daughter has posted online. That’s where he first encountered African Americans, and he really got to know them. He also encountered people who were terrible bigots, and he was quite advanced for his time in his beliefs about how racism is the most pernicious aspect of human nature, of what a threat it was. That was in the late ’40s, and I think that sensibility, and his incredible sense of humor, keep the book feeling so fresh.

How does one go about writing an introduction, especially to such a key book?
I said, ‘Yeah, I’ll do it,’ and then I immediately thought, ‘What am I supposed to do?’ I had a personal connection I knew I could write about, but then I decided—I’d heard of Murray Morgan, I knew who he was, but I didn’t know anything about him to speak of. I interviewed his daughter Lane, who is still around and available and had a good relationship, both working and personal, with her parents and knew a lot about him. I was able to go into his letters, which is where I got a sense of his voice independent of the book. And then I went down to the Tacoma public library, which has the Murray and Rosa Morgan Reading Room. That’s where his family donated all his books. His papers are there, too, but they haven’t been cataloged, so you can’t get into them in any shape. I was able to go through a lot of old newspaper clippings—a librarian had clipped them out—I was able to sit there and go through the actual clips, and that’s where I got a much better sense of his feistiness. He was a guy who was up for everything.