When it comes to sourcing ingredients, the local Washington food scene is pretty impressive

Going local seems non-negotiable. Thanks to the region’s rich terrain, temperate climate and network of talented farmers, growers and fisherman, riches abound whether we’re talking hops for beer (the state grows nearly 80 percent of the country’s supply) or seasonal favorites from cherries and apples to Walla Walla sweet onions. 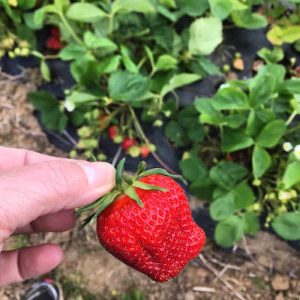 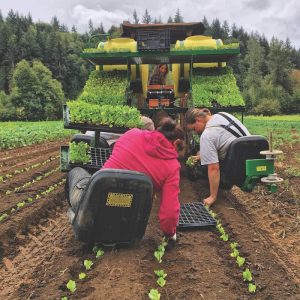 Some products, however, fly under the radar. Washington, for example, is the highest blueberry- producing state in the country, having yielded about 120 million pounds in 2016. Washington asparagus, which comes in several varieties and is one of the first products to arrive each spring, supported the local economy in 2017 by bringing in $45 million. Sara Morris, president of The Beecher’s Foundation, launched by creative food company Sugar Mountain (famous for its award-winning Beecher’s Handmade Cheese), said food grown here proves so remarkable for many of the reasons the region is also home to countless entrepreneurs and tech pioneers. “ There’s something in the water,” she said. “

This region attracts a certain profile, and the rest of us get to benefit from that.” “Washington’s climate is ideal for organic production because there aren’t too many insect pests,” said Susan Ujcic, co-founder of Helsing Junction Farms (located outside of Olympia) with Anna Salafsky. “We also have a long growing season and summers that usually aren’t too hot.” In the educational yet approachable workshops Beecher’s Foundation hosts for adults and schoolchildren, Morris and her team discuss how food has evolved over time. The way Americans eat today, she noted, has dramatically shifted from how humans ate for centuries, leaving us far removed from “pure, real, true food.” She and her team recently launched a ten-year campaign “to change Puget Sound’s food for good.” “When we buy local or grow our own,” she said, “we are getting that much closer to the food source…We know what we’re putting in our body and not harming the earth while we’re at it.” 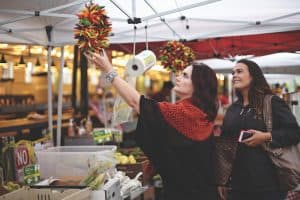 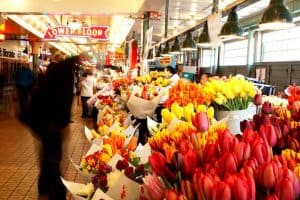 Residents and visitors need only step foot into bustling Pike Place Market to experience the local food scene with all their senses. The market formed in 1907 when Seattle citizens became outraged at a ten-fold price increase in onions—as a result, farmers started selling their products on a vacant wooden roadway. Today the much-expanded Pike Place remains one of the oldest continuously operating markets in the country. Outside the city, foodies enjoy meandering along the Olympic Culinary Loop, a tasty trail showing o the Olympic Peninsula’s diverse microclimates, coastal proximity and Native American heritage. In Wenatchee, the Stemilt Growers Retail Store lets visitors sample the bounty of one of the state’s premier apple, pear and cherry growers. In every season, events honor the state’s most celebrated products, ranging from the Hama Hama OysterRama, held each spring in Lilliwaup, to the Dungeness Crab & Seafood Festival, held each fall in Port Angeles. 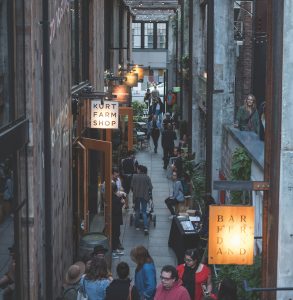 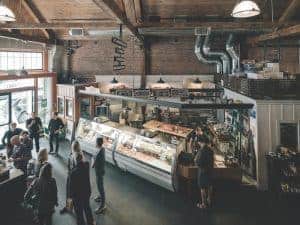 In downtown Seattle, restaurants like Urbane pride themselves on using local ingredients and purveyors. Since opening its doors, Urbane has counted Tonnemaker Farms of Royal City, just east of Ellensburg, as part of the family. It’s clear that chef Brian Pusztai couldn’t agree more with the eatery’s philosophy. “For me,” he said, “I’ve always felt sourcing locally is the right thing to do. You’re working with the flavors of the Pacific Northwest that haven’t had to travel far, meaning they are the freshest they can possibly be. I also take interest in knowing exactly where my food is coming from.” Pusztai loves working with local, fresh seafood, especially Penn Cove mussels and the Taylor Shellfish shigoku oysters. “My family and I often make the visit to Taylor Shell fish’s Chuckanut farm in Samish Bay, right outside of Bellingham,” he said. “I also really enjoy working with geoduck because it is such a unique ingredient to the Pacific Northwest that tastes delicious. Oh, and we can’t forget fresh foraged mushrooms. There are so many varieties that are right in our backyard, like morel and yellow chanterelles.” Not far from downtown, culinary a cionados enjoy a ten-block stroll in the Pike-Pine neighborhood between Melrose Market and Chophouse Row, two buzzing hubs for talented local growers, makers and collectors. 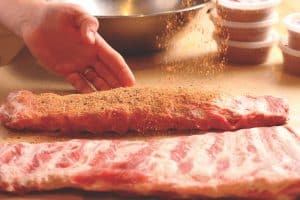 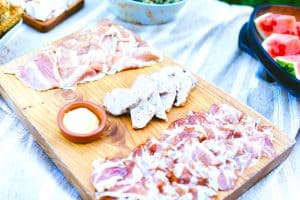 Highlights among the markets’ many vendors include Rain Shadow’s famous bacon, cuts of beef, charcuterie and terrines, not to mention its selection of in-season produce (think blueberries, peaches and apples from the Yakima Valley). Visitors can also dine on the rooftop of Terra Plata, surrounded by organic gardens, or enjoy a pairing of fresh crab and pinot gris at Taylor Shellfish. “Not only do we celebrate local bounty—everything from hand-foraged mushrooms and fiddlehead ferns at Sitka & Spruce (the menu changes daily to reflect only whatever is in season) to the abundance of crab and shellfish, often caught that day, straight from Taylor Shellfish Farms in the waters of Puget Sound,” Melrose Market and Chophouse Row owner Liz Dunn said. “But in some cases, over its more than ten years, Melrose Market has made certain local foods famous.”Among these items—the Plane Bread and hand-churned butter that have anchored Sitka’s menu from the get-go and the handcrafted cheeses from Kurt Timmermeister’s cows on Vashon Island and Richard and Louise Yarmuth’s goats in Darlington.

GOOD TO THE LAST BITE 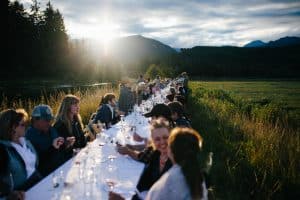 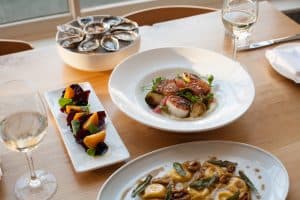 When it comes to the benefits of living here, there seems to be a consensus—amazing food that’s inextricably linked to the landscape and culture. “Being so close to so many amazing products in the Pacific Northwest, from the produce to the beer and wine,” Pusztai said of why he lives here. “ The summers are amazing, and I love to get out in the sun while boating, crabbing or swimming in Lake Washington. “ Plus, customers are looking for a place they can call home, and Washington’s farmers, ranchers, chefs and others are providing that. “ ere’s more latent demand than ever for locally sourced, hand-picked product. And I mean handpicked in both senses—sourced directly from the fields, forests and waters of the Northwest, and also hand-curated by our vendors,” Dunn said. “Here’s why it matters to customers: In an increasingly digitized, online- driven world, people are hungrier than ever for a sense of place.” 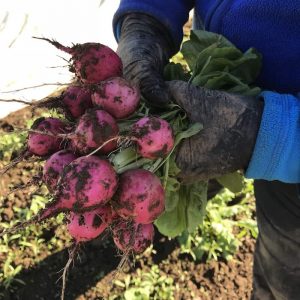 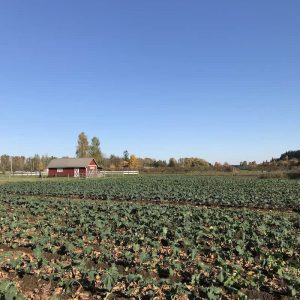 Anna Salafsky and Susan Ujcic, who began Helsing Junction Farms in 1992, remain deeply committed to organic farming and their community. Located 20 miles south of Olympia in Rochester, on the Chehalis River, the farm sells most of its produce through a Community Supported Agriculture (CSA) program, but it also hosts weddings, an annual music festival and farm-to-table experiences in a lovely event space. The farm grows more than 150 varieties of organic vegetables, fruit, flowers and herbs. “We’ve been farming together for over twenty-five years,” Ujcic said, “so we bring a lot of experience to the table, but we also love trying new things. We focus on the health of our soil, so everything we grow tastes and looks its best.” Both have strong design backgrounds and a deep love of food—once they began farming, they were hooked. “Working with the earth and feeding people is deeply rewarding; we really enjoy sharing the farm with our community,” Ujcic said.

Todd Van Mersbergen’s family farms 200 acres north of Lynden, about 1 mile south of the Canadian border, where they’ve been working since the early 1900s. “You could say I was born to farm,” Van Mersbergen, who has been directly involved for the last twenty years, said. “ I am the fourth generation to farm here in Lynden, and many generations before that were involved in agriculture in Holland. We started as dairy farmers and diversified into raspberries in 1995 and into blueberries in 2006. It’s great to be your own boss and really see the rewards from your planning and labor during harvest.” Today the Van Mersbergens farm about 100 acres each of red raspberries and blueberries. “The cool maritime climate and long days during the growing season make Whatcom County an ideal place to grow blueberries,” Van Mersbergen said. “Couple that with rich, well-drained soil, and it’s no wonder we can get the most tonnage per acre and highest sugar content in our berries.” “The best part about farming is taking my wife and kids out to the field and driving down the rows, being able to be outside with them and watch the plants go through their phases,” he said. “The farm is a great place to learn about life. That’s the other part I love—the seasonal nature of farming, and getting to work with the environment and the weather. No two days are ever the same.”

Located just north of Pasco, this family farm has fantastic views of Juniper Dunes. The Larsens have been here since the early ’60s, when they broke the ground out of sagebrush and bunchgrass, and the only roads were two-track trails used by sheepherders. Larsen’s family is one of the seventy remaining asparagus farmers in the state. “In ’85 when we started with asparagus, there were 32,000 acres of it in the state, and now there are 4,400 acres,” he said. He credits an abundance of good quality water, rich soils and changing seasons for making Washington “the premier state for growing asparagus.” He praises the region’s rich volcanic soils and the fact that asparagus here go dormant in the winter, allowing nutrients and carbohydrates to move to the crowns (roots) for sweet crops the following year. The most rewarding part of his job? “Seeing the success and breaking some of the traditional ways of growing asparagus,” Larsen said. “Also, seeing people come back year after year to buy our crops and saying, ‘We have tried other asparagus and none compare to the sweetness and quality of yours.’”