Sip in the Evergreen State

That the majority of grapes in Washington are grown east of the Cascades is of little consequence to Puget Sound residents. After all, from the Sound you can taste pretty much the entire state. These days, Woodinville—just twenty miles northeast of Seattle—is the stomping grounds for many of the state’s 850-plus wineries. Here, among palatial estates with peacocks roaming the grounds and boutique wineries packed into old warehouse district chop shops, it’s possible to taste everything from albarino to Walla Walla syrah.

At Chateau Ste. Michelle, wine lovers taste from the state’s oldest—and likely most well-known—winery. From there, ramble east to the Hollywood Winery District, where tasting rooms for Walla Walla and Lake Chelan wineries stand side by side. One moment you can sip a dense cabernet sauvignon grown on the hot, windswept Red Mountain, the next you can explore a savage syrah raised on the massive cobbled beds of The Rocks AVA of Milton-Freewater.

In this densely-packed tasting district, it is best to wander door to door, getting to know the state by tasting a dry riesling raised at higher elevation or a merlot full of blue fruit, yet made with restraint. 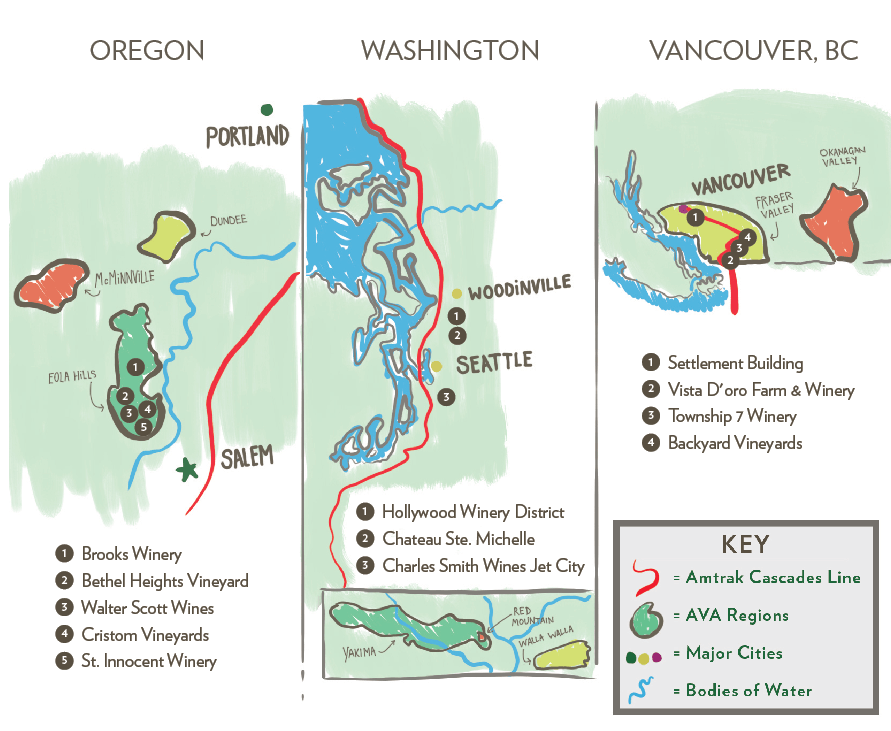 Of course, Woodinville isn’t the only place to get a taste of Washington from within the Puget Sound. Twenty-five wineries have tasting rooms in Seattle proper.

South of downtown, outside a former Dr. Pepper bottling plant, Learjets and turboprops taxi down the Boeing runway against a Mt. Rainier backdrop. Inside the 32,000-square-foot warehouse, chardonnay is cascading into glasses. What is now Charles Smith Wines Jet City opened in August and offers everything from private dinners to concerts. Most importantly, it offers tastings.

Like in Woodinville, there’s an opportunity here to get a taste of the state in just one place. On one menu are eight Charles Smith wines. Seven are available for $6 per tasting. The last one is the Kung Fu Girl. It’s a $20 tasting, but this kung fu could knock over any wine afficionado.

Charles Smith’s staff pour K Vintners rosé, viognier, syrah and merlot, as well as all three single-vineyard Washington chardonnays (and a cuvée of those three) from the Sixto lineup. This is a chance to get a good sense of place through three single varietals.

Taste Near the Train

In the heart of downtown—a few short light rail stops from King Street Station—restaurants with enormous Washington wine lists give diners a chance to sample
the state.

Purple Cafe and Wine Bar’s enormous wine list includes bottles, glass pours, and flights from hundreds of Washington wineries. There’s the Washington white tasting trio, for example, focused on white Rhône wines made in Walla Walla and the Columbia valleys, as well as a full page of bottles of Bordeaux-style Washington reds.

Nearby, Michael Mina’s RN74 restaurant devotes seven pages of its list to Washington wines. Organized alphabetically, a description of each of the wineries is included—a treat for any research-loving oenophile.