If beauty is in the eye of the beholder, Werner Hiemann excels at the gift of observation. This Ridgefield resident takes overlooked items that were often once considered household necessities and breathes in them new life. He sees possibility in the ordinary and calls the final product “illuminated art.”

Thomas Edison would be proud. A general contractor by trade, Hiemann employs his welding skills to transform such common—and typically vintage—pieces as a Geiger counter, a 4-foot turn-of-the-century coffee grinder, a surveyor, a hairdryer from the 1950s and a baby buggy into light fixtures. 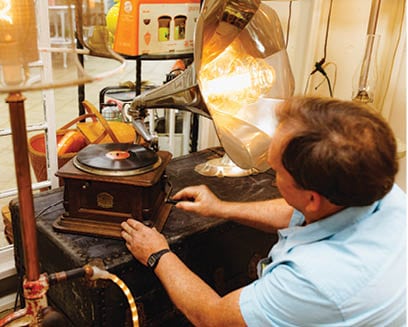 Working mainly with Edison bulbs, Hiemann first sees the lines of a fencing mask as aesthetically pleasing and then thinks a step beyond its intended function to engineer each item into illuminated art. Subtle changes are necessary, but Hiemann’s goal is limited intervention. He said his mind has to work quickly because he purchases most of his pieces at vintage stores, and if a potential buyer stares at an item for sale too long “people think you’re crazy.”

Because his process is so organic, it doesn’t work for Hiemann to have someone give him a treasured item or family heirloom and commission him to fashion it into a light. He may take it apart several times before he arrives at just the right configuration, so Hiemann has to like the object enough to work with it for an extended period.

“A lot of times, I start a light and leave it taken apart until an idea comes to me as to how to construct it. It rarely falls into place like it did in my head when I saw it. There’s always an unknown challenge, and color or texture play a role,” Hiemann said.

The end result is a time capsule of sorts, albeit a practical one. In the case of a copper tea pot, Hiemann removed the bottom of it and installed a light there. Light now emanates when the lid or the spout is opened. Hiemann found a vintage surveyor with its original wooden box and tripod. In between the tripod, he crafted and installed a glass table with a drawer underneath in which to store the wooden box.

To the delight of kids and adults alike, many of the Werner Lights turn on by touch. Whereas many artists prefer a hands-off approach to their work until it’s purchased, Hiemann encourages interaction. Deciding whether a fixture will light up by touch or switch is entirely a visual one. If Hiemann determines it will detract from his illuminated art to have a switch, he will hide the circuitry and ground the light to metal—as in the case of the early twentieth-century fencing mask, a circa-1904 Graphophone vintage record player that still plays vinyl and a 1930s typewriter. A Detecto candy store scale, however, has delicate chains that dangle symmetrically under each bulb. 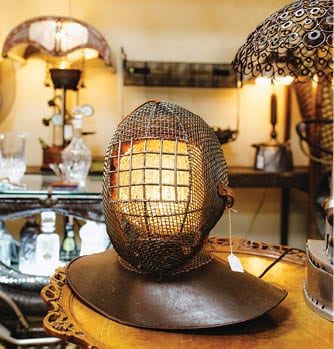 The fascination with illuminated light began nearly two years ago, when Hiemann was looking for a hobby to keep him away from the TV and a pastime he could share with his son. Together, Hiemann and his wife, Leza, own Birch & Crow Vintage Market in Battle Ground, where Hiemann now displays his lights. In her research, Leza Hiemann came across “steampunk,” a creative movement that incorporates nineteenth-century industrial steam-powered machinery and the Victorian era. To encourage collectors to take steampunk off the store’s showcase shelf, Heimann spotlights the repurposing ability of items past their prime.

Other examples of Hiemann’s artistic talents can be found throughout Birch & Crow, where he envisions and builds many of the vendor spaces. He is also responsible for constructing “The Stage,” a seasonally inspired collaborative showcase, reminiscent of department-store windows, that greets visitors at the entrance to the store.

Hiemann has multiple outlets that push his innovative inklings, but Werner Lights is a culmination of all of them.

“From finding the piece to figuring out how it’s going to flow to finding the ability to hide the circuitry to deciding whether a switch makes sense,” he said, “it’s a challenge from beginning to end.”