Bridget Gunning learned the power of gravity when she was a child. A piece of her clothing got stuck on the outside of an escalator in a mall. The conveyor tugged her higher and higher as her anxiety mounted. “My brother kept yelling jump, jump!” Gunning, now 35, recalled.

The trauma of that moment stuck with her, even today as a professional aerial artist flying high over the heads of gaping audiences below. “It gave me a taste of how much gravity weighs,” she said.

Whatever its mass, gravity becomes lighter, more fluid and more alluring when Gunning performs on a trapeze at The Pink Door, an Italian restaurant and cabaret in downtown Seattle.

It wasn’t until she was 21, just hired by the Zuzi Dance Company to perform modern dance, that Gunning found the higher calling of aerial arts.

There is something about this simple movement that was so beautiful and pure. I was hooked.

She landed her first aerial performance in Tucson. At 26, Gunning then moved to Seattle. The Emerald City was a place where dance pioneer Joan Skinner taught movement and technique—the cultural center of aerial arts. Gunning began performing with such dance companies as Manifold Motion, Emerald City Trapeze and Ticktock, a “deconstructed” circus company. At Ticktock, Gunning and her colleagues transformed canopy beds, old stoves and clawfoot bathtubs into theatrical platforms for their art. “We liked to bring magic into the mundane, integrating circus, aerial and dance,” she said.

In 2010, a colleague asked her to substitute for her place at The Pink Door, a landmark restaurant with a flair for cabaret. Gunning won over the guests, and the owners quickly hired her to perform regularly.

“I can look right in people’s eyes when I perform and feed off of what’s in them … while they’re eating lasagna,” she laughed. “I’ve only knocked over a couple of drinks.”

Spilling less and teaching more, Gunning, together with videographer Goldie Jones, opened Apex Aerial Arts to help others make creative use of gravity. “This is about what I do and the flavor that I like to pour out to the world,” she said. 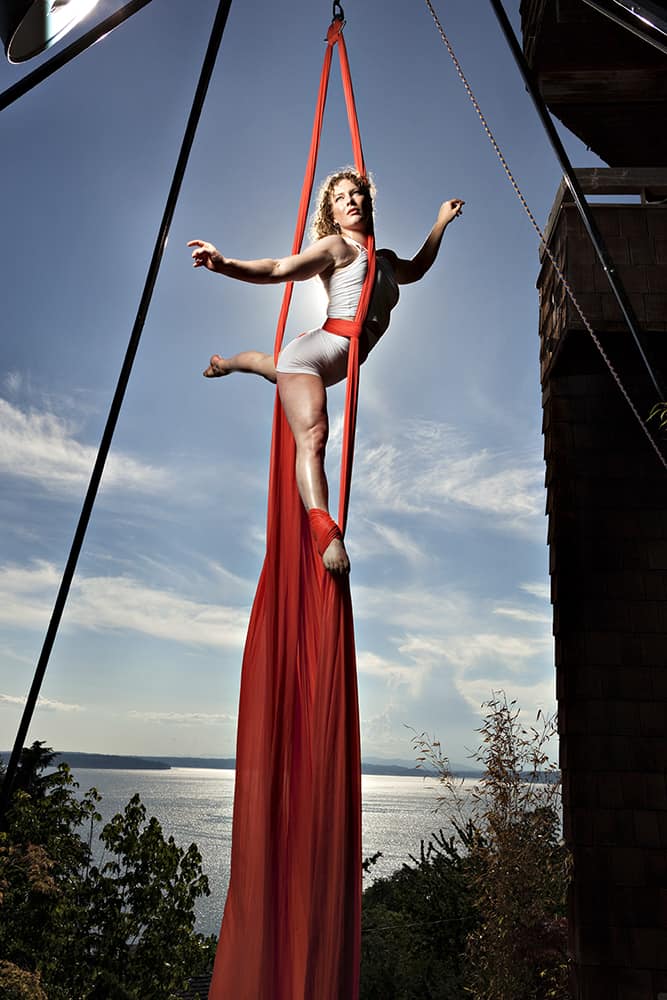