Marisela Fleites dances the dance of many cultures

Complex, passionate, difficult, demanding and mesmerizing. These are the words Marisela Fleites uses to describe flamenco—her craft, her pride, her passion.

The Spanish art form, a solo dance characterized by hand clapping, percussive footwork and intricate movements, originated with the Gypsies in Andalucia. Flamenco then evolved over centuries, melding the three main cultural traditions of Spain: Christian traditional music, Moorish music and Jewish liturgy. It also takes some of its rhythms from Africans who came to Spain as slaves.

“I love the freedom of expressing my emotions that Flamenco allows—the huge physical demand and the connection with so many different cultures behind it,” said Fleites, 56. 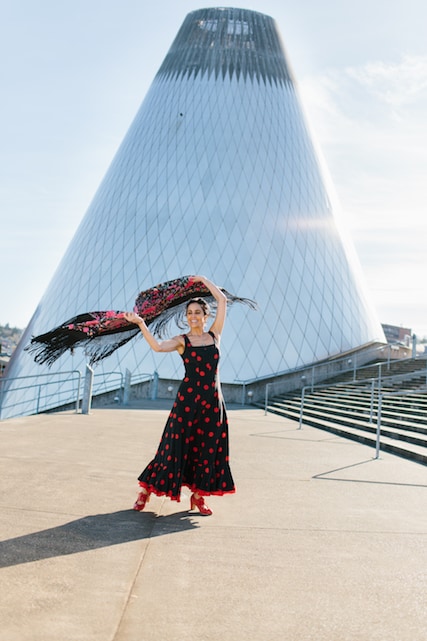 Growing up in Cuba, Fleites began dancing at the age of 5. She was the first dancer in her family of Spanish immigrants. She has since studied in Cuba, Spain, Mexico, and the United States alongside a long list of masters, including Olga Bustamante, Orlando Vargas, Stella Arauzo, Mari Carmen Guerrero and Estefania Martinez, and many more people whom she considers mentors.

Fleites has lived in Washington since she and her husband both got teaching jobs there in 1993. She directs the performing group Tacoma Flamenco and has taught at Lakewood’s Washington Contemporary Ballet Studio since 2001—the studio has become the center of flamenco teaching and performances south of Seattle. “Teaching allows me to share my passion for [flamenco] with my students, and it contributes to the formation of a community of people united in the love of art,” she said.

To Fleites’ delight, flamenco is catching on in her Pacific Northwest community, with the region becoming a recurrent stop for flamenco masters, shows, groups and classes. The Ianus Foundation in Olympia promotes and supports flamenco, connecting all the regional efforts. Several other organizations and classes are spread around Seattle and Kirkland.

For those wanting to get in on the action themselves, Fleites recommends signing up for classes at Washington Contemporary Ballet, and arriving with, “commitment, discipline, a good understanding of rhythm and good body coordination.” Others can enjoy live shows like those at Pizzeria La Gitana in Olympia, on the third Saturday of each month. Here Fleites’ current and former students perform alongside musicians such as guitarist John Bussoletti and flamenco singer Samir Osorio. These soul-fueled performances evoke a range of emotions—sometimes raw, often intense, always captivating.