Take a group of high-tech software experts, add a few scientists and an interest in eliminating food waste. What do you get? WISErg, a company that is taking grocery stores’ left over food and converting it into high-quality organic fertilizer. It started with an idea to measure food waste in local grocery stores. Brian Valentine, WISErg’s CEO and a former Microso and Amazon executive, tells it like this: In 2009, Jose Lugo and Larry LaSueur approached Valentine with an idea. The three had all worked at Microso together (“We’re so ware people,” Valentine said) and LaSueur and Lugo had an idea to collect data on food waste. “Can we collect data on what is being thrown away behind grocery stores that we can give back to the grocery store manager?” Valentine asked. “Then that will help them to manage their inventory better. That was the original concept.”

“Like most startups, if anybody tells you they had a clue where the idea would take them, they’re lying to you,” Valentine said, laughing. The company has grown from there. WISErg has found a value stream in food waste, and Valentine believes there are other businesses to develop from that. “We definitely want to continue to expand,” he said. “ There’s so much of this waste out there. The more we can upcycle, as opposed to recycle or throw away, it’s just better.” He points to three prongs of eliminating food waste. The first is upcycling, like WISErg does. e second, which Valentine said we don’t do very well, is diverting waste—whether by sending edible leftovers to food pantries or otherwise diverting it from the landfill. 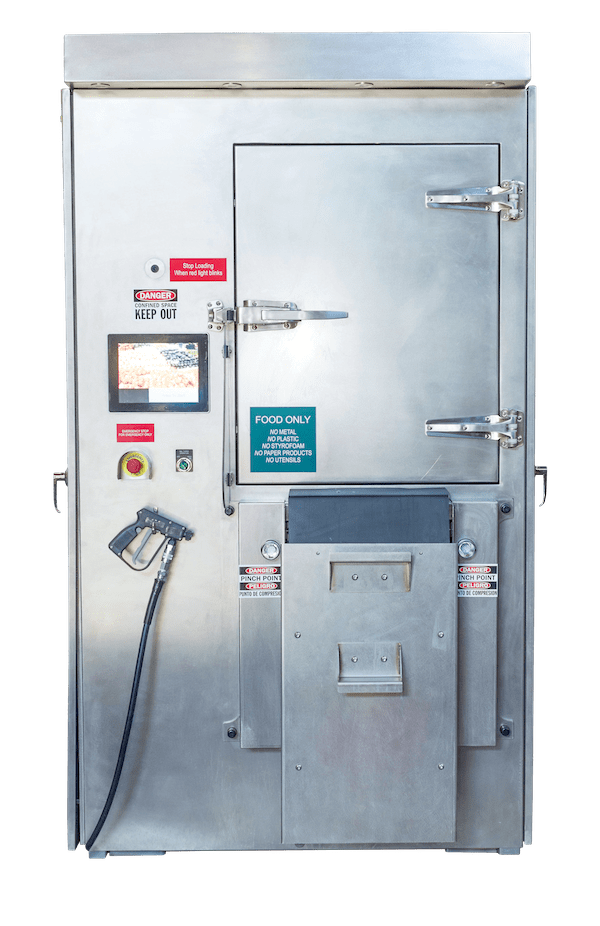 “If you can make money, great,” he said. “But socially we should all be appalled by how much of this waste could be eaten by humans.” The third prong is reduction—how to avoid having leftover produce at grocery stores, for example. Those three prongs—diversion, reduction and upcycling—done correctly, result in so little waste that it’s “not even really waste anymore,” Valentine said. To measure the food coming out of the back of the store, the company developed the Harvester, a self-contained unit that takes a large volume of food scraps otherwise headed for the land ll and turns those scraps, including hard stuff like bones, into a liquid that is used for fertilizer. Three generations of the machine later, the Harvester is in fifteen locations around Seattle—at the back of some Whole Foods, PCC Markets and Costcos around the region. During the design process, a professor at the University of Arizona asked the obvious question: “What do we do with what comes out of the back of the machine?” It seemed a shame to let such high-nutrient material go to waste. At first, the company considered turning the processed food waste into some sort of bio-gas. “ That went on for a couple years and didn’t really pan out,” Valentine said. Eventually, someone suggested the food waste be converted into liquid, organic fertilizer. “All of the material in the food waste is super high nutrient,” Valentine said. “We had to figure out how to capture the nutrients, not let it get away.”

When food sits in a curbside dumpster in the sun, it rots and those nutrients disappear. Most of the food that’s thrown away at grocery stores is taken o the shelves because it’s at or past its sell-by date, not because it has gone bad. The Harvester captures the food while it’s still fresh and full of nutrients. Because it’s self-contained, there are no odors, no pests, and no leaks into storm drains. “We solve a bunch of problems for grocery stores,” Valentine said. Plus, grocery stores pay the company for the material. The company created a biological process that stabilizes the food inside the Harvester to prevent the nutrients from disappearing. Finally, the company developed a process to turn the stabilized food waste into a liquid that can be turned into fertilizer that is 100 percent certified organic. “It took about five years to figure all that stuff out,” Valentine said. “ Then, finally, we had developed the biology so that we could make a gallon of liquid fertilizer. The next step was, ‘How do you scale that from a manufacturing standpoint?’” Those fifteen stores produce enough food waste to create 5 million gallons of fertilizer each year.

“The problem isn’t acquiring the material,” Valentine said. “ There are 4,000 grocery stores on the West Coast. The challenge as a company is getting the product accepted in the market.” WISErg’s fertilizer is 100 percent sustainable from a waste resource, making it different from most other fertilizers. Many organic fertilizers are fish-based, which isn’t sustainable because of over fishing. Other organic fertilizers are made with manure, which raises food-safety issues. “ The first thing that happens when you walk onto a grower’s property is they look at you like the latest snake-oil salesman who promised the world but couldn’t deliver,” Valentine said. “ This is an industry of crazy product promises that couldn’t deliver. So you have to get through that first.” The agricultural business community can be a little slow to adopt new products. It takes trial cycles, and a cycle is a growing season. Many farmers have agreed to try the fertilizer on small sections of their land as a trial.

“By the second trial they’re typically now starting to believe,” Valentine said. Though there’s little data, Valentine said he believes WISErg is the largest liquid certified organic fertilizer exporter to Mexico and the second largest on the West Coast. Today, the company has a plant in Redmond that converts 4 million gallons of liquid fertilizer a year. The company is selling fertilizer in Central and South America, the U.S. and Mexico. “We just started shipping product to Costa Rica and Chile,” he said. As the fertilizer gains in popularity, Valentine said, there are stores lined up to install a Harvester. In the meantime, Valentine said it’s about feeling like you’re doing something that helps the planet. Valentine has worked for Amazon and Microsoft—he’s seen innovation before. “But nothing is as satisfying as this,” Valentine said. “My wife asks me, ‘How was your day today?’ And the joke in our family has become, ‘Just saving the world one day at a time!’ It’s a different feeling, being able to do something like that, that might make a difference.”