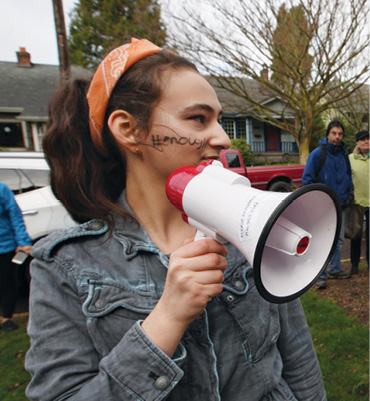 JAMIE MARGOLIN OF SEATTLE is a senior in high school, but she’s already an internationally recognized climate change activist. In 2017, at age 16, she and other teens launched an organization called Zero Hour to coordinate a youth-led climate march in Washington, D.C. Zero Hour went on to spearhead educational campaigns, hold a climate activism summit in Miami, and organize youth-led strikes and rallies. Margolin recently returned home from a speaking tour in Europe, where she addressed international audiences and received an MTV EMA Generation Change Award. She’s been writing a book, Youth to Power, coming out in June 2020 and available for preorder at www.youthtopowerbook.com.

How did you get involved in climate activism?

I had been concerned about climate change for a long time, but it seemed like such a dauntingly huge problem I didn’t know where to start making a difference. One of my mom’s coworkers was involved in a group called Plant for the Planet and recommended I reach out to them. Soon I was working with them all the time. I went to Olympia to lobby members of the state legislature on a climate bill, testified at hearings and spoke at rallies.

What prompted you to take your activism to the national level?

I’d had ideas in the back of my mind about starting a larger, youth-led nationwide climate mobilization. Then in 2017 all these things happened that made the climate crisis feel even more urgent—smoke from forest fires covered Seattle in smog, Hurricane Maria hit Puerto Rico, yet not enough people were making the connection between these extreme weather events and climate change. That’s when I knew it was time to take my work to the next level.

What was it like writing a book? What should people expect when they read it?

I wrote Youth to Power during junior year of high school, and the first draft was due right before Zero Hour’s big Miami summit. I had to squeeze in time to write whenever I could, but I enjoyed getting to put down on paper all the activism experiences I’d learned from and wanted to share with others. Readers should expect a very relatable guide that walks you through what it’s like being a climate activist as a young person. It’s a sort of field manual, but also talks about the human aspect of being an activist, how it changes you and how to make sure you still hold on to the things you love.

Would you tell me about your speaking tour in Europe?

Keeping up with schoolwork was tough, but it was great getting a more global perspective on the climate change movement. In European countries like Denmark, people are more aware of the problem. I would start explaining the science and they’d be like, ‘Yeah, we know.’ When I told them some people in the United States deny the reality of climate change, they thought that was funny.

How do you avoid getting burned out from so much activism work?

The only way to deal with burnout is to take a step back and re-evaluate your work-life balance. I remind myself activism is one thing I do, but it’s not all there is to me as a person. It’s important to just go do normal, fun things sometimes.

Not enough people were making the connection between these extreme weather events and climate change. That’s when
I knew it was time to take my work to the next level.