For Rich Hatfield, senior conservation biologist with the Xerces Society for Invertebrate Conservation, the Pacific Northwest Bumble Bee Atlas marks the culmination of two decades of work studying wild pollinators. The project will enlist volunteers to monitor bumble bee populations across the region, gathering data for conservation projects. In early June, Hatfield led a training for volunteers in Wenatchee in partnership with the Washington Department of Fish and Wildlife. Another Washington training will take place west of the Cascades in 2019.

How did you end up studying pollinators? Between undergrad and grad school I worked with Dr. Claire Kremen, then at the Center for Conservation Biology at Stanford University, comparing insect pollinators on organic versus conventional agricultural lands (Dr. Kremen is now at University of California, Berkeley). Through that project, I realized pollinators and benefits they provide create a strong conservation message. You can attach a dollar value to pollinators due to their clear ecosystem services, an economic piece that was missing from many other conservation projects.

That really got me interested in continuing to study bees. What’s the significance of bumble bees? Not everyone realizes honey bees are a non-native species imported from Europe. We have about 3,600 North American native bees, including around fifty bumble bees. However, many native bees are tiny, and in grad school, I realized how hard it is to identify most without doing a whole PhD on them. Bumble bees are a workable group to identify and good ambassadors for native pollinators. They’re also major pollinators of crops like tomatoes, blueberries and cranberries. Eighty-five percent of plants require pollinators, and it’s not honey bees doing most of that work. Mostly it’s native pollinators. 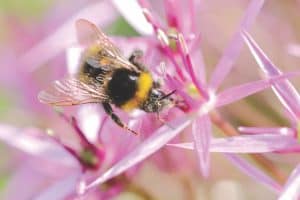 Can you tell me about the Bumble Bee Atlas? In 2014, we started Bumble Bee Watch, an online citizen-science platform where people submit photos of bumble bees they’ve spotted. We’ve had some 25,000 records submited. The problem is they mostly correspond to population centers where people submitting the photos live, and from a conservation biology standpoint that’s not terribly useful. For the Bumble Bee Atlas we’ve divided Washington, Oregon and Idaho into 50-by-50-kilometer transects. We’re asking volunteers to adopt a grid cell and sample it at least twice a year using our standardized protocols. The idea is to conduct a more systematic survey.

How can people help native pollinators? One great thing about pollinator conservation is you actually can do something about it. If you live in an apartment and put flowers in a pot on the porch, bees will show up. Good bee habitat means flowers blooming spring through fall, bare patches of ground and wood for nesting and overwintering sites, and having flowers be pesticide-free. Native plants are best because that’s what native bees evolved with. Visit the Pollinator Conservation Resource Center, bringbackthepollinators.org, for more information.

What’s next for you and the Bumble Bee Atlas? I’ll be encouraging people to sign up as volunteers, because I can’t do this project without help. It would take me years to collect the data we’ll be gathering. Joining the project is a great way to learn how to become a wildlife watcher anywhere, even in your backyard or neighborhood park. A whole safari is waiting for you out there. I’ve raised my kids this way and it’s been huge for them, realizing they can go in the yard and find insects. If kids can grow up as li le entomologists instead of being afraid of bugs, that’s a big deal, in my opinion.