These Washington Towns are remaking their downtowns, but preserving their beautiful bones

Sometimes travel looks like a Boeing 737 and far-flung foreign affairs. Sometimes it contemplates the museums, theater and the second act of a star chef. Once in a while, though, we crave cities and towns that are in the earnest process of rebuilding from the old bones out, cities in the process of transition. These are the places where downtowns matter and are under construction, where buildings pleasantly old and beautifully built are getting facelifts, places where there are fewer suits than boots, where rent is affordable and new restaurants are leading indicators, a place where cafes and artists thrive. These four Washington towns inspire us to find the beauty in the grit in the transition from old to new. 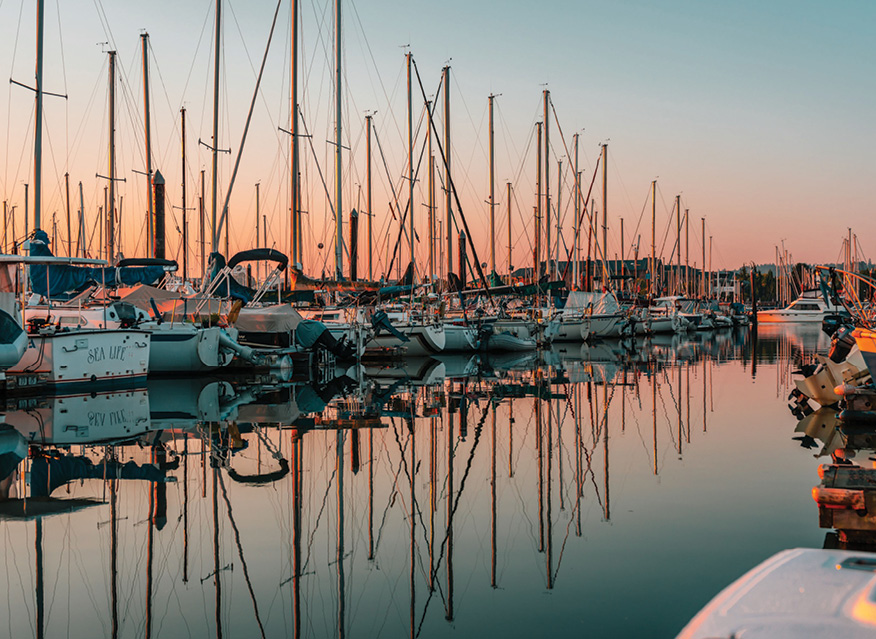 Everett was once a lumber town with a viable port as a second alternative to Seattle, 25 miles south. Today it’s the number two deep-water commercial shipping port in Washington based on export value, supports eight shipping lines and transports millions of dollars of airplane parts for the city’s largest employer, Boeing.

As stevedores are loading and unloading cargo, a 65-acre waterfront redevelopment is underway with 1,250 family housing units, a grocery store, a theater, an office building and the 142-room Hotel Indigo from the InterContinental Hotels Group as its centerpiece.

Just east of the port, Everett’s downtown is unpolished but with patina and engaging institutions. Schack Art Center opened in 2011 and instantly became an exhibition space for local and international exhibits. For pop culture, look up. The headquarters for Funko, the creator of pop culture products, has current characters decorating its downtown building and collectibles from bygone eras—Charlie from Starkist tuna, Big Boy from the restaurant chain, Godzilla and Batman.

Cool coffee shops are popping up and serving a young population of mobile workers. Narrative Coffee on Wetmore Avenue is a small, stylish space backed with brick and framed with warm wood. Down in the industrial docks, At Large Brewing and Taproom is another advancement for Everett craft beer drinkers. Just around the block is a symbol for the story of downtown Everett—a natural food co-op, a welding shop and a tattoo parlor.

Washington’s second-largest city, Spokane, has long been transforming the lovely old buildings of its core downtown and riverfront into one of the state’s finest examples of tasteful urban renewal. That includes projects such as the intricate and stunningly renovated Bing Crosby Theater (The Bing), originally built in 1915 by Swedish silver magnate August Paulsen, and the iconic double-barreled Central Steam Plant. Once a coal-fired steam plant, it closed in 1986 and later transformed into Steam Plant Square, a historic renovation that includes 80,000 square feet of office space, dining and retail space. Notable is Steam Plant Brewing Co.’s Kitchen & Brewery, with stone-hearth pizzas and signature Smokestack burger.

Downtown is also anchored by the Historic Davenport Hotel, first opened in 1914 and ushered in with a wave of grandeur in the architectural style of Spanish Renaissance. Its lobby alone transports its guests to an era when style and detail were at a premium. Rescued from demolition in 2002 by Walt and Karen Worthy, the Davenport is now a collection of hotels in Spokane that includes three other notable properties. Another hotelier and developer, Jerry Dicker, is making a big play in Spokane redevelopment. In addition to renovating The Bing, Dicker has also built a portfolio of Ruby Hotels in renovated downtown buildings.

Downtown is a work in progress. While along one street there may be cafes and boutiques, on others are the faces of urban homelessness. In one refreshing move, star chef Chad White in 2016 opened his ceviche-as-art restaurant, Zona Blanca, right in the middle of the fray.

The City of Spokane has been progressive in its role, too. The city passed a $64 million bond to launch its Riverfront Park redevelopment. Once a World’s Fair venue in 1974, the park had become more liability than asset to citizens by the early 2000s. In 2014, the bond passed and investment followed.

In 2018, Spokane signed an agreement with Verizon and modern city planning consultant firm Urbanova to improve the city’s transportation, communication and air quality. As a result, Spokane was one of Verizon’s first 5G city rollouts.

Within the arts, Spokane is growing and innovating. From the Northwest Museum of Arts & Culture to the Spokane Symphony and the new Myrtle Woldson Center for Performing Arts at Gonzaga University, the arts have a strong stage presence here in a city that has wrapped its troubles in dreams and made those dreams come true. 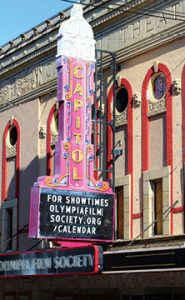 The Capitol Theater is a busy spot run by the Olympia Film Society. 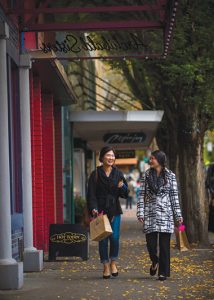 Olympia’s downtown is alive with boutiques and bars. 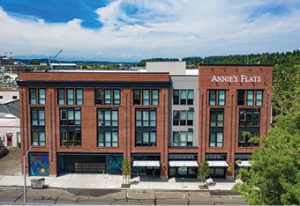 ABOVE Annie’s Flats is a remodeled forty-eight-apartment building.

Just 60 miles south of Seattle, Olympia is another example of a city with great downtown bones that hasn’t yet reached its potential.

The segment of Olympia from the State Capitol campus north to the farmers market is the core of downtown, architecture and the focus of development. The new buzzwords around town are: lofts, flats and artist studios. A city document updated last September lists downtown projects including artist studios, downtown lofts, towering condominiums and mixed use buildings, such as Views on 5th, with gorgeous views of Capitol Lake and West Bay.

At the center of a growing arts community is the Washington Center for the Performing Arts in its 1924 building, once a Vaudeville stage and a movie house. Highly acclaimed music and dance performances are de rigueur. Olympia Film Society, housed in the beautiful and historic Capitol Theater, brings first-run movies, indie films, documentaries and burlesque shows to Olympia residents. Contributing to the local creative economy is the newly opened Annie’s Artist Studios in an old Montgomery Ward building and the companion piece, Annie’s Artist Flats, with forty-eight apartments.

As much as its downtown urban areas, Olympia’s parks are part of the allure. In 2004, the city passed a funding measure to buy 500 acres of park land by 2024. Olympia currently has acquired 447 of the 500 acres. In 2016, the city passed a bond measure that will fund new athletic fields and ten new neighborhood parks.

Three Magnets Brewing has twelve rotating taps, avocado fries and smoked salmon mousse, hamburgers, lamburgers and veggie burgers since 2014. Perhaps the best symbol of Olympia comes from Fish Brewing, the oldest operating brew pub in Olympia, where, at 5 p.m. every day, a steam whistle on the roof of the brewery marks the end of the work day in this working-class town.

• Washington Center for the Performing Arts 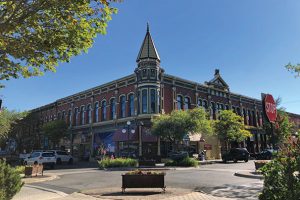 The Davidson Building was completed in 1889 at the center of Ellensburg.

Hotel Windrow is in the renovated Elks Club on Main Street. 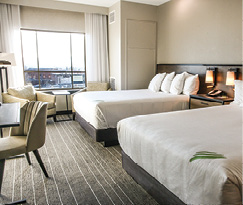 Every Labor Day weekend, the Ellensburg Rodeo takes over town.

Many state capitals were founded at the dead center of the state, making them equidistant for those traveling by horse. Its central location was Ellensburg’s argument for becoming Washington’s state capital in 1890, when it lost out to Olympia. Ellensburg’s consolation prize was the State Normal School, which later became Central Washington University.

In the year of Washington’s statehood, 1889, the showy Victorian Davidson Building was completed and now stands at the center of Ellensburg’s downtown historic district. A new icon marries old and new in the Hotel Windrow, a renovation of the historic Elks Club on Main Street. For locals, Hotel Windrow brings Basalt, a new restaurant led by “Iron Chef” winner Larkin Young that sources locally and responsibly.

One of the long-standing traditions of Ellensburg is the rodeo. The local newspaper, the Daily Record, has a web tab dedicated to the rodeo, for example. Every Labor Day weekend, the Ellensburg Rodeo on the edge of town brings one of America’s top ten rodeos to town in its outdoor stadium.

Originally called the Edison Hotel, the historic New York Cafe Building on Main Street was bought by Seattle architect Ross Anderson and renovated to include four apartments and 5,000 square feet of retail.

A cool Art Deco building in the downtown core now serves as the town’s cultural center, housing the 420 Loft Art Gallery. The stylish building was designed by Carl Gould, who also designed the Seattle Art Museum and planned the University of Washington.

Perhaps one of the best cultural acts in Ellensburg is the two-day old-school music celebration, Buskers in the Burg. In September, musicians take to street corners to perform al fresco. This little town of 21,000 turns downtown into a showcase of talent and community spirit.

A new icon marries old and new in the Hotel Windrow, a renovation of the historic Elks Club on Main Street.

• Buskers in the Burg