Bibliophile: By The Shore

Nancy Blakey wants to make outdoors accessible to all 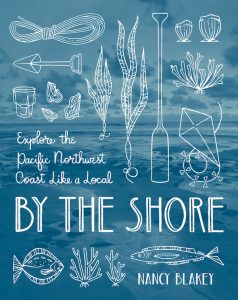 Nancy Blakey wants you to get outside. Damn the rain—just go for it. Blakey, a mother of four, wrote five books based on a syndicated column called Mudpies, which she wrote for Seattle’s Child. In the books, she came up with interesting activities kids could do instead of watching TV or playing video games. “I believe in benign neglect,” she said of her way of raising children. “All the projects I ever saw, you had to do with the kids.

They felt fussy, and you had to show the kids what to do and supervise them. My philosophy was just sort of hands off, which is what true creativity is.” Her new book, By The Shore: Explore the Pacific Northwest Coast Like A Local, which came out in May, is a similar approach, just for grownups. The book gives readers ideas for accessing the outdoors and the wilderness, season by season, with activities, advice and recipes. “My ideal reader is a couch potato who’s kind of restless,” Blakey said. “A lot of people are super outdoorsy, and those people may enjoy the book. But my goal is, I really want to get people outside.”

When I was first asked to propose the book, I said, ‘I don’t want to do a typical guidebook—I don’t want to do Fodor’s. I want to do polar bear plunges and beach fires. Sasquatch Books was great—they let me run with it and gave me free rein. So I just put in there things I wanted to do, or things I wanted to explore, or things I had already done that I wanted to share with others. I’ve always been pretty outdoorsy, but that had slid away. You just get buried with work and kids. I had this light bulb after meeting a woman who said, ‘Oh you live on Bainbridge Island? You must be hiking and kayaking all the time.’ It was kind of embarrassing. So I began exploring and hiking. I live in Alaska in the summers, and the backcountry is so unforgiving that it’s made me a pretty astute outdoors person. You have to know what you’re doing. So I brought that into my book.

How did you settle on the format? I love the way you give advice.

The idea actually came from my editor, Hannah Elnan. This book is technically geared toward millennials. One of them wanted to go salmon fishing but didn’t know where to start and didn’t want to appear stupid. So we came up with this idea of a guidebook. All these people have come to Seattle or the Pacific Northwest, so Hannah suggested, ‘How about you guide us? How about you teach us?’ The back story is my husband died suddenly five years ago. He was delivering a motorcycle to Loreto in Baja Mexico and he had a heart attack. I was blindsided, and my whole family spent a couple years reeling. The book absolutely was one of the things that brought me back to the things I love, and to life again. The outdoors has always been a real consolation to me, and to take family members and friends and do the research tailored to whoever I was with and what they were interested in really brought me out of that gray zone and showed me that the world was still waiting. I have years ahead of me, hopefully, and the book was really instrumental for me. It brought me back around.

What was your favorite adventure you did for the book?

Solo hiking has always interested me, and I’d done a night here and a night there solo. But it’s kind of daunting as a woman to go by yourself. I really, really wanted to do it. It was part of my healing to get out there and face it with squared shoulders. Men do it all the time and nobody blinks, but a woman does it, and it’s like, ‘Oh no!’ I did The Juan de Fuca Trail on Vancouver Island. It was incredible, it was daunting, it was hard. I got muddy and bruised, but I just really loved it. Plus, I did it—now I can do it without blinking. Just like any endeavor, you put one foot in front of another. I don’t think anyone ever goes outside and comes back in and says, ‘Oh, I wish I hadn’t done that.’

How do you hope people use your book?

I hope it feels accessible. My intention is to make the outdoors accessible for everyone, a family or a 30-something or a boomer. I want the book to scale up or scale down. I think it’s really important for people to understand that spending time outdoors is one of the most valuable things they can do for their wellbeing. More and more research is showing that the outdoors is, in a way, critical to our sense of contentment and de-stressing.

The Dirty Gourmet Cookbook is Classing Up Your Campout