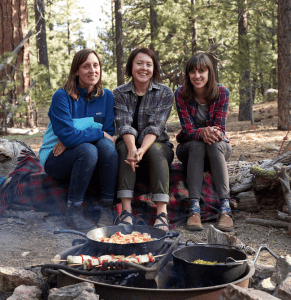 Aimee Trudeau, Emily Nielson and Mai-Yan Kwan have a message for the outdoorsy set—camping doesn’t have to be all franks and beans (though they have nothing against a good hot dog once in awhile). With their new cookbook, Dirty Gourmet, from Washington’s Mountaineers Books, the trio are helping you class up your next campout. We’re talking baked brie, roasted garlic and dutch oven sticky buns. With more than 120 recipes, Dirty Gourmet has tips and tricks for all food situations, whether you’re car camping, hiking the trail for a day trip or going into the backcountry. Kwan gave 1889 the inside scoop on taste tests, lessons learned and the ever-elusive savory oatmeal.

How did the idea to make this cookbook come about?

We started the blog over eight years ago—it was just a little passion project we did on the side. Aimee and I had gone on a bike tour for four months and camped the whole way, from Los Angeles to Vancouver, Canada, and then across Canada. I continued on to Boston after that. During that time, Emily was an outdoor science instructor in Big Bear, so she was also living the camp life for three years, teaching and living in cabins. We were all living outside for extended periods of time and cooking outdoors. That’s how Dirty Gourmet started—when you get into situations where you’re outdoors a lot and you cook outside enough, beans and hot dogs and the classics are fine but you need to go beyond that at some point. I love to make myself a good old hot dog, but we tried to go beyond what you typically think of as camp food.

Why is eating well while camping something that appeals to you?

Aimee and I had a realization on our bike tour. You meet a lot of cyclists on the road and you end up camping together, and we would look at how other people were cooking and realized, ‘Whoa, our meals are pretty complicated.’ We would think all day, ‘What are we going to make tonight?’ We would plan our whole route so we could go to a grocery store and spend two hours grocery shopping. It was just really about what we like to eat and seeing what we could experiment with. Our mission is to inspire people to eat great food outdoors. People spend so much time planning trips, and then the food is just the last piece of it. We’re trying to put more emphasis on the food, which is a huge part of the experience when you’re outdoors. You’re connecting with nature and refocusing and that’s really a healing experience. Food becomes more important outside your comfort zone.

How did you test these recipes?

It was definitely trial and error. What we like to let people know is, we have made all the mistakes for you, so hopefully you’ll avoid making them again. We first tested the idea for skillet lasagna, a one-pot meal, on a snowshoeing day trip, and we had a bunch of people with us. We were so excited. We brought a thin backpacking pot and a single-burner camp stove. It just burned. Everyone had to eat burnt lasagna on that trip. So lesson number one, bring backup just in case it fails. Don’t try a recipe blind on the first time you go out there. One recipe I was working on that did not work at all is savory oatmeal. I like savory breakfasts. I was super determined, and I tried a bunch of combinations, with miso, with a Mediterranean flavor with pine nuts and sundried tomatoes. People could not even wrap their heads around it. It was, ‘No, I don’t want to eat this.’ That’s a fail. I’m going to move on from that.

What advice do you have to set up campers for success?

For something like car camping, I really encourage people to stick to recipes that are their go-to at home. Don’t try to do something you’ve never done before in the outdoors. Set up a camping pantry, a bin where you keep all those things you need, like a spatula and salt. That’s what happens when you go camping— those essential things have been forgotten, and something simple becomes quite complicated. Also premeasuring things in general, even for car camping. I always recommend that you portion everything out and put in Ziplocs or mason jars, which are watertight, so you don’t have to worry about them going into a cooler or a bin. Even eggs—crack them into jars.

What’s the next step for you?

We do small, intimate dinners for a dozen people or for more than 200 people on multiday campouts. I think our next step is to figure out how to clone ourselves. We really have to scale that. The great thing is we’re in demand, people want us to come out and come on a trip and cook for them, but we need to build out our team. This summer, we’re teaching a hands-on backpacking cooking class, which will be set up for up to twenty people doing everything by themselves like a traditional cooking class but outdoors and backpacking. That’s a new thing for us. A little thing in the back of my mind is, we’ve made one cookbook and we had to really refine our cooking skills. I’m still developing new recipes, so I keep thinking, ‘OK, this would be good for our next cookbook.’