Stoup Brewing elevates pizza and beer in a Kenmore space

In the remains of Kenmore’s Seaplane restaurant rises a pairing of beer and food that resonates like a perfectly sung note. Weiman Maclise and chef Jason Stoneburner brought thoughtful dishes and a gorgeous space to the Kenmore spot that sputtered to a halt in the midst of the Covid crisis. When thoughts of reopening stirred, the team knew a pivot was necessary. Partnering with a local craft brewery to showcase Stoneburner’s thoughtful dishes paired with equally thoughtful beer just made sense. The top choice was the award-winning beer at Stoup Brewing in Ballard.

Stoup’s team, hosting a well-curated rotation of food trucks, had long held visions of a taproom with a kitchen. When Maclise pitched the opportunity to partner on the Kenmore space, however, the team at Stoup took time to be certain it was right. “They never do anything hastily, they are very cautious and thoughtful with all of their decisions,” said Nikki Koth, Stoup Brewing’s general manager.

The results of this union at the second Stoup Brewing in Kenmore is obvious. The food is elevated but approachable, the best version of pub food, with local, carefully sourced ingredients. Here, the nacho cheese is house-made with premium cheeses and the pork comes from a local purveyor Stoneburner knows personally. The ethos of the culinary ideals match seamlessly with the beer. “We couldn’t be more thrilled with the menu,” said Brad Benson, co-owner and head brewer at Stoup. “The locally sourced ingredients and creative menu choices reflect an approach to food that … I have always admired, similar to our own approach to beer.”

The pizza crust is possibly one of the best in Seattle, a recipe that Stoneburner has been perfecting for nearly a decade. Toppings include locally made sausage, brie and caramelized onions. It’s a force to be reckoned with when it comes to an artisan pie in Washington.

Along with the twenty-two Stoup brews in rotation, the bar also serves two batch cocktails on tap, such as the “Corpse Reviver,” a gorgeous and well-balanced cocktail made with local gin, orange liqueur, Lillet and lemon peel and topped with a beautiful butterfly-pea-flower tea. The atmosphere is friendly and kind. The staff has a genuine desire to make a genial space, a feeling that’s palpable. “We want to make sure people in the area feel welcome. … We want people to be happy,” Koth said with an endearing smile. You can tell she means it.

Stop in for a pint and a slice. Make sure to say hi to your beertender, and bring along your pup, your kids or your friends—this is a space for all. 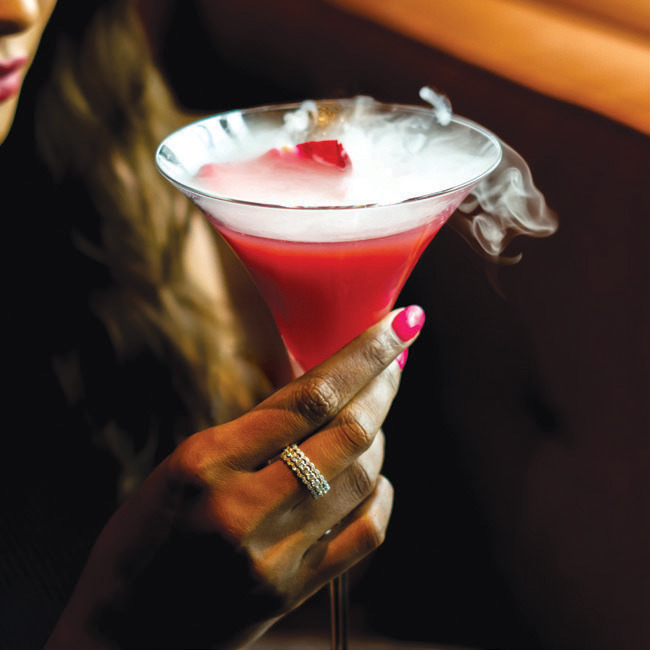 Combine honey and rose water in a saucepan, bring to a boil, then lower to a simmer to reduce into a syrup.

Combine sugar and water in a saucepan, bring to a boil, then lower to a simmer to reduce into a syrup.

0 replies on “Stouping to Success”