“You caught me in high experiment mode today,” Linda Miller Nicholson said as she made me an espresso in the gleaming kitchen of her home near Snoqualmie Falls. Nicholson, also known as the “Lady Gaga of Pasta” and the “Pasta Ninja,” was a ray of sunshine on an otherwise dark, stormy day, dressed in bright reds and floral prints. She was ready for action, with rounds of crimson and white pasta dough placed on a large wooden work surface.

An Instagram sensation (@SaltySeattle) with more than 150,000 followers, Nicholson is known for her highly expressive way with pasta. She created the “Girl with a Noodle Earring” after Johannes Vermeer’s famous work, and made a pasta version of Van Gogh’s “Starry Night.” Katy Perry’s manager asked her to make a pasta portrait of the singer for Perry’s “Bon Appétit” single album cover. Nicholson also contributes to Buzzfeed and the Food Network and teaches pasta-making workshops. She’s appeared on television shows such as “Harry” and “Home & Family.” Her first book, Pasta, Pretty Please, is coming out in October. Although she turned to pasta dough as her medium of choice for high art only several years ago, she first began earning her pasta chops as a kid, making thick noodles with her German grandfather.

She also competed on a cooking reality show, “Masterchef,” in 2010 and honed her skills in the kitchens of Italy while living there as an English teacher. Nicholson pulled a handful of crimson dough from the round and began flattening it in her silver pasta machine, handling the dough with easy, flowing movements. “It is mesmerizing, isn’t it?” she said. “During productions, even the camera guys sometimes get caught up in watching the process.” A few minutes later, the project took shape, Nicholson revealing both her artistic talent and her rebellious side. She worked the dough like a dressmaker, carefully pleating it and working deftly with the drape as if it was fine fabric rather than a sticky mixture of our and eggs. Next, she made little white cones, glancing occasionally at images on her phone to help with styling.

I finally found my medium. I’ve been making pasta my entire life, but nobody said that’s art. Keep doing what you’re doing if you’re passionate about it. What I’m doing now is the culmination of everything that led up to this point.

“Today is the only day I have to do what I want to do,” she said, continuing to pleat and fold the red garments. Busy with appearances, workshops and handling the business side of her work, Nicholson also remains in high demand for commissions. At the top of her “Who I’d most like to have over for dinner and make a pasta face of” list is Ellen DeGeneres. She said the very idea is intimidating. “I can’t get Ellen wrong!” Next is Christopher Walken. “Wouldn’t he be great?” Last but not least, Yoda. “He won’t be upset if I get it wrong.” “I think I’ll do Ellen first,” she said. Soon, Nicholson’s full vision for the day’s experiment came into view, as she put the pieces together and— voilà! Suddenly, we weren’t in northern Washington anymore, but Gilead, as a group of perfectly formed tiny women in crimson robes and white bonnets ala “Handmaid’s Tale” appeared to march across the flour-dusted counter.

All of Nicholson’s work is edible, and later, she would lightly boil the “maids,” pipe a ricotta mixture into the robes and perhaps plate them with a red sauce— another delightful meal with a message. Nicholson said she was told early on she wasn’t artistic, but the desire to create never left her. As a teen, she tried her hand at sewing clothing. “My magnum opus was a pair of patchwork bell-bottom pants that I literally sewed polished brass bells onto the bottoms of,” she said. She cinched them up with a drawstring and wore them to school. The bells made such a ruckus she was sent home. She first began experimenting with pasta when her son, Bentley Danger, went through a picky food phase. She began making nontraditional pasta shapes and brightly colored dough using natural ingredients like turmeric, harissa and vegetable purées, such as beet and spinach. At that point, her creativity took over . “I finally found my medium,” she said. “I’ve been making pasta my entire life, but nobody said that’s art.

Keep doing what you’re doing if you’re passionate about it. What I’m doing now is the culmination of everything that led up to this point.” Nicholson, who never turns away from a pasta pun, good or bad, said that with pasta as her medium, not only are the artistic “pastabilities” endless, but creating with food allows her to accomplish her larger goal of bringing people together, opening authentic conversations and making the world a better and more beautiful place. Much of her work is whimsical and fun—bright rainbow pasta, colorful figures and brilliant geometric designs— inspired by her love of fine art, nature and fashion. But Nicholson doesn’t shy away from the occasional political message or bold statement. And all her work is “more than dough deep.” “It’s more than just a pretty piece of pasta,” she said as she carefully adjusted the bonnet on one of the handmaids. “Not everyone has to appreciate art, but everyone has to eat. It gives me a bridge. I like that what I do has the power to bridge gaps and foster togetherness across political lines.”

Make Your Own Pasta, Pretty Please: 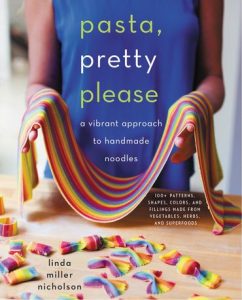 A vibrant approach to creative handmade noodles Linda Miller Nicholson’s first book will be published in October. The book, full of recipes for all levels of home cooks, will feature instructions for twenty-five colors of pasta dough, tinted with natural ingredients. The “playful and inviting” book will include recipes, techniques, tips and inspiration for doughs, shapes and sauces—from “Hearts and Stripes Pappardelle” and “Emoji Ravioli” to “Golden Milk Ragu” and “Pepperoni Pizza Filling.” Learn more about Linda and her art, workshops, video tutorials and more at saltyseattle.com.