Much of Patrick Nguyen’s art is small and disposable, which doesn’t exactly seem like the way to build a booming career. Known as Dozfy, Nguyen built a following for his signature drawings—small line sketches doodled onto the paper menu of whatever restaurant at which he is eating. Now, Dozfy has found a way to turn the drawings into an experience for other diners, creating interactive dinners with many of the city’s top chefs and bounding into a career that ties together food and art. 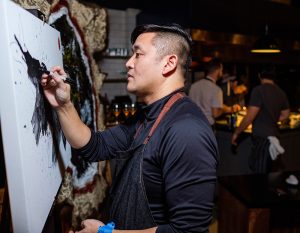 Dozfy drawing on a larger format than a napkin in a Seattle restaurant. Photo courtesy of Patrick Nguyen. 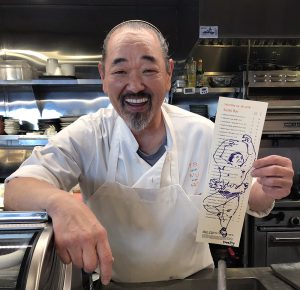 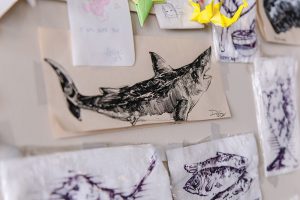 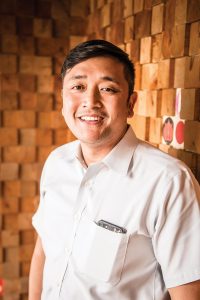 Patrick Nguyen, aka Dozfy, fuses art and cuisine with his menu drawings. Photo by Jackie Dodd. 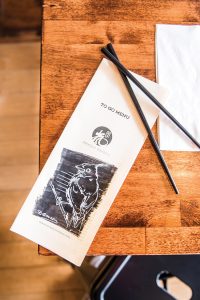 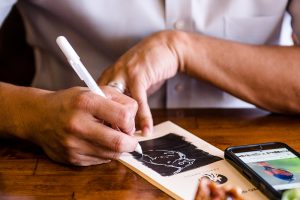 Dozfy swoops in again to put a bird on it. Photo by Jackie Dodd. 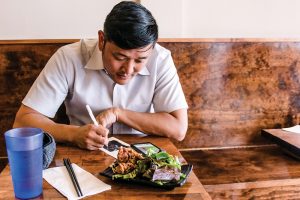 Dozfy sketches a bird while dining at Arashi Ramen in Ballard. Photo by Jackie Dodd. 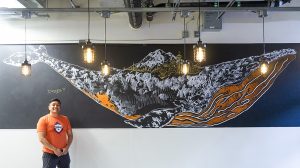 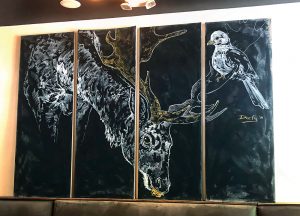 His menu sketches began in 2015 when he still lived in Atlanta. The then-hospital efficiency expert doodled on a receipt, then threw it away when he got up to go to the bathroom. When he came back, a friend had dug it from the trash to keep. Soon after, he noticed the lion he’d drawn on the cocktail menu hanging behind the bar at Leon’s Full Service. While Dozfy hadn’t seen the worth in his work, other people did—he started to gain traction and recognition for his art, each piece signed with the name Dozfy. When he and his wife moved to Seattle not long after, he jumped into the art full time.

His Instagram following soared as he ate his way around his new home city, leaving behind evidence of his presence in the form of a black menu topped with a white line drawing. His art is clean, crisp, and symbolic—like the lion for Leon’s or the carrots that appear on a mural inside the remodeled FareStart in Seattle (carrots are the first task new participants in the program are assigned). But what sets his art apart from other sketchers isn’t the drawings themselves, but where and how they’re made.

“Some people can have a conversation with anyone,” he explained, “but that is not my forte.” Instead, he expresses himself through the art he draws on menus. “That’s my language.” The drawings came about because his wife enjoyed eating in new restaurants, and leaving behind the art became his way of expressing appreciation for what the restaurants do.

Soon, he transitioned from doodling on menus for free to accepting commissions to create murals on restaurant walls and chalkboards. But there was still something that felt one-sided about his art. An art school mentor of his had once said there are three parts to the art—“the art itself, the artist and the audience,” and that the third was most important to making a living as an artist.

Remembering that, Dozfy mused on how to have people interact with his menu art. “How do I make it an experience?” In March 2018, he created the first “Eat With Your Eyes” dinner. He had found the intersection between food and art, and now invited a third party—the live audience—to join. “Timing was crucial,” he said of his first tentative steps into the innovative genre—a gentle dance with the chef and the servers to enhance each others’ crafts through collaboration, rather than distract.

Using the familiar framework of a restaurant also gave Dozfy the latitude to play with the art—diners became comfortable interacting with him through various games, with drawings as the prizes, and as he drew chalk murals or created small pieces of art for diners to take home. The events are a bit different every time, an evolving art form, but the centerpiece is that diners enjoy a meal and witness the creation of a new piece of Dozfy art.

“Menu art was just me and my wife,” he said. “Then the restaurant,” once he started leaving his sketches behind. “Now the audience is part of the art.” And that audience is growing. In recent months, Dozfy represented the city of Seattle on a media tour through Japan and Korea, painted oyster shells at the Hama Hama Oyster Rama, and completed the mural in the new FareStart restaurant. Diners can see his rotating chalkboards at Edouardo Jordan’s Salare, a pillar full of his drawing at Shota Nakajima’s Adana, and multiple paintings in various media at Mutsuko Soma’s Kamonegi. He’s not sure where he will take his art next, but he hopes to figure out how to grow his art to bigger, more widely seen mediums. He offers “The Bean” in Chicago (“Cloud Gate,” by Sir Anish Kapoor) as an example of how he’d like to see people interacting with his art on a large scale—bringing his intersection of food, art, and audience to more folks. “I want to activate people, to tap into fun, but also to say something.”