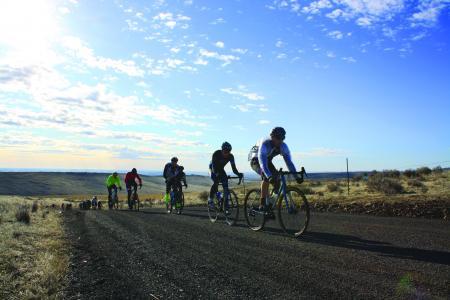 I climbed the last hundred feet out of my saddle, my bike tires spitting up a gravel road with Ponderosa pines towering overhead. I had gotten used to the feeling of pleasure and pain commingled in my body. Wide vistas of Idaho’s Pioneer Mountains narrowed to the width of the gravel road as I pushed up the last big climb of Rebecca’s Private Idaho, the brainchild of cycling legend and Ketchum, Idaho, resident Rebecca Rusch. Nothing seemed harder. Nothing seemed more gratifying than this, my introduction to gravel riding.

Gravel, in its forms of speech, has described scratchy voices and roads to dead-end residences. Now, gravel is an honorific describing a burgeoning trend in cycling and some of the best ways to experience the Pacific Northwest through either competitive races, group rides or self-guided exploration.

This discipline of cycling marks the convergence of three phenomena—increasingly unsafe road riding with distracted drivers, the discovery of seldom-used BLM and U.S. Forest Service gravel roads, and a cycling industry serving up what people want.

“It’s like a perfect medium in between mountain biking and road riding, and, of course, the best part is just the scenery,” noted Anne Marie Stonich, a Seattle resident and long-time cyclist. “It’s generally gorgeous on any gravel ride. You’re guaranteed to be on some beautiful, remote road.”

For bike manufacturers, gravel has created a new challenge and new demand. Bikes designed for gravel riding generally look like road bikes but have wider, more durable tires than road bikes, and are more upright and longer for stability. In 2018, this phenomenon led to record sales for gravel bikes, according to the Bicycle Product Suppliers Association.

Gravel riding offers a license to ride virtually anywhere there are dirt roads and out of the path of distracted drivers. America has approximately 1.3 million miles of unpaved roads. Idaho has about 14,000. Washington has about 20,000. Oregon has 71,000.

“People are looking to get off the highway and are really enjoying this experience called gravel that isn’t new by any means, but is intriguing,” said Dave Jones, a Boise-based gravel rider. “People like to be out where they’re not getting buzzed by cars, and they’re in new places that they haven’t seen, or they’ve only seen by a car.”

With miles of forest and service roads through beautiful topography ranging from high alpine to high desert and coastal rainforest, Washington has some of the most pleasing traits to win the gravel pageant. For the casual gravel rider, multi-day expedition gravel bikepacker or gravel grinder racer, the Evergreen State is an all-in-one mecca.

Take the Cross-Washington Mountain Bike Route, a 684-mile mixed trail that extends from La Push on the western bank of the Olympic Peninsula across the high alpine Snoqualmie Pass and into the rolling terrain of Eastern Washington, ending south of Spokane on the Idaho border. Much of this trail makes for great gravel riding.

Farther north up to the Methow Valley, dirt roads abound. On the edge of the North Cascades, small towns such as Winthrop, Mazama and Twisp are connected by more than 100 miles of trails, that, in winter, are groomed for cross-country skiers. In summer and fall, they find dual use for hikers and bikers through fields of wildflowers in vast mountain meadows.

Just west of Olympia in the Capitol State Forest, cyclists buzz the miles of gravel and dirt roads of the Black Hills, also home to one of Washington’s top gravel races—Cascadia Super Gravel, which falls on March 30.

Of course, we can’t introduce rideable forest service roads without mentioning Ellensburg, which is a great jumping-off point for hundreds of miles of dirt roads leading into the southern reaches of the Okanogan-Wenatchee National Forest. Just a little north, Liberty Beehive Road or NF 9712 between Wenatchee and Cle Elum is an arduous route with soaring mountain views.

Like Washington, Oregon has an embarrassment of riches when it comes to unpaved roads. Similarly, astute explorers can select the ideal season for each climate and topography. In spring, Southern Oregon is the warmest, drier than the coast and without the snow depth of Central and Eastern Oregon. Early summer and before fire season is the best time for getting back on forest service roads in Eastern Oregon and the Columbia River Gorge. After fire season and after the first frost, Central Oregon is at its best when it has lost its high elevation snow and high alpine mosquitos.

In Central Oregon, trails into the Deschutes National Forest, Ochoco National Forest and Willamette National Forest offer many opportunities for gravel geeks. One beauty is to take McKay Creek Road out of Prineville and into the Ochocos on a 45-mile loop of mixed pavement and gravel and 2,150 feet of climbing. Another favorite is the back route from Bend to Sisters via NF 4606. This 50-mile out-and-back route is relatively flat, yet remote.

From Hood River or Government Camp, you’re close to accessing opposite ends of the historic Barlow Road, a 44-mile unpaved wagon route on the Oregon Trail. End your ride with excellent breweries in either town.

Cycle Oregon, an organization long known for its scenic road outings, tapped into the gravel trend and added a two-day gravel ride in October in the Tillamook State Forest, a 364,000-acre, state-owned forest an hour west of Portland.

Indeed, the entire state of Oregon can be traversed top to bottom on continuous gravel ride. The Oregon Outback ride extends 364 miles from Klamath Falls on the southern border to The Dalles on the Columbia River. This is for the experienced bike packer and can be done over five to seven days. See www.oregonbikepacking.com for more information.

One of life’s true treasures is riding out of Ketchum on the Harriman Trail and up through the valley between the Sawtooth, Pioneer and Smokey ranges. This well-maintained, 55-mile out-and-back gravel route climbs gently to Galena Lodge, where you can access more trails or grab a beer and a sandwich before descending back to town.

On the more epic side of life, try the 133-mile loop beginning in McCall and winding counterclockwise up to the famed Burgdorf hot springs, then northwest to Riggins and south to McCall on mixed roads.

Outside of Boise is a little gem of a gravel ride. Beginning at Little Gem Cycle Park about 20 miles northwest of Boise, a relatively short 22-mile loop has some gritty climbs and thrilling descents before ending where it began.

Rebecca’s Private Idaho—Queen’s Stage Race: A multiday festival that finishes with a race on Sunday. The main event (The Big Potato) covers a little more than 90 miles.