It’s been said that overnight success can take years to achieve. Seattle filmmaker Derek Armstrong McNeill can attest to that. After three decades pursuing related yet fragmented interests, the common denominators of his life finally revealed his gift of storytelling. When McNeill began concentrating on the growing homelessness in his city, clarity hit him and he knew he could present the human side of the issue with The Road to Nickelsville.

“A moment was happening in Seattle that would later be seen as a pivotal point, and I felt there was a story that needed to be told,” McNeill said. “I wanted to craft something more than a sleepy documentary but add subtext that operated on different emotional layers.” McNeill joined the United States Air Force straight out of high school and spent the next eight years as a photographer. For the better part of his Air Force career he shot, printed and processed lm. After his service, he worked as a wedding and portrait photographer, freelanced for a newspaper, earned an advertising degree from the University of Alaska with a minor in design and even created Windows ads for Microsoft.

He’d wanted to pursue filmmaking since he was a child, but McNeill was unable to afford film school so he tried to nd satisfaction in photography. In 2000, he was inspired by the opening title sequence of the HBO series Six Feet Under. He discovered the company responsible for it, Digital Kitchen, was in Seattle and took a motion design class it offered. McNeill then had a front-row seat to the making of the True Blood title sequence and his path in filmmaking became more grounded. McNeill began to feel the stirrings to go out on his own in 2013, and a couple years later he decided to tackle the topic of the controversial Seattle homeless encampment known as Nickelsville.

To date, his documentary, The Road to Nickelsville, has earned multiple awards and nominations from the film community. Trough a series of intimate interviews, McNeill breaks down misconception after misconception without taking a political or social side or offering a solution to the homelessness problem. He allows the “cast” to tell their own stories in words, through facial expressions and a very personal look into their day-to-day lives. Compassion and empathy are the premier instruments in any effective storyteller’s toolbox, and McNeill employs both deftly as he seeks to deliver a familiar concept to his audience and let them digest it anew. 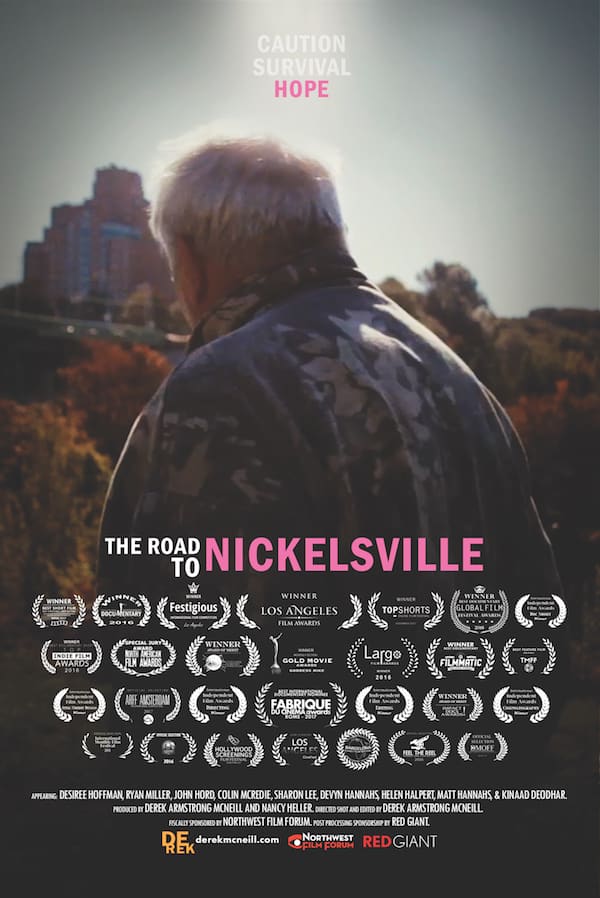 “I didn’t want it to be a finger-wagging exercise. I wanted people to stop and think and question their assumptions. I wanted to create a neutral look. It’s a very emotional and personal look, but I didn’t have a strong agenda that you must feel sorry for these people, and I also didn’t say, ‘ these people are lazy,’” McNeill said. “I think art in its truest form works best when it holds a mirror up to the viewer and causes them to stop and think about their own humanity.”

It is his nuanced stylings that have garnered critical acclaim for The Road to Nickelsville, including winner at the International Independent Film Awards for Title/Credit Design, Editing, Cinematography, Directing and Documentary Short Film. He was one of four finalists—out of 1,300 submissions—for Best International Documentary at the Fabrique Du Cinema Awards held in Rome last December and judged by American representative, Willem DeFoe.

“Fabrique is a symbol to me that it (the film) is doing well and touching people,” McNeill said.

His next venture, Appleseeds, explores another complex human issue—the secret to true happiness. Similar in style to The Road to Nickelsville, McNeill pastes together a collection of interviews with men and women ages 65 to 85. Commissioned by a friend designing an installation on aging, Appleseeds goes beyond the premise of how to find hope and happiness through adverse life moments and, organically, delves into the cultural issue of elder worth. One interviewee mimics the way he’s treated by saying, “Oh, he’s old. He must be retarded.” While that may sound harsh, it is a reality that the elderly face and, just like The Road to Nickelsville, Appleseeds promises to challenge cultural assumptions, open the eyes of the audience who choose to see the film and, possibly, start a conversation. It also offers hope. “So, you take everything you’ve been through in life and, if you’re fortunate enough to live ‘til you’re older, how can you not be beautiful? It has nothing to do with your gender or the color of your skin. How can we not be beautiful?” another interviewee asks proudly.