Kalama is a small rail town and a shipping port that’s easy to pass without notice. Charming even from a distance but forgettable once you’ve reached your final stop, the small town of Kalama is now officially “destination worthy.” With their signature combination of upcycled antiques and local artisan creations, the McMenamin brothers have brought the familiar stay-and-play hotel chain to a quietly captivating stretch of the Columbia River, just forty-five minutes north of Portland.

Kalama Harbor Lodge is absolutely worth any effort it takes to get there. In some ways, it’s exactly what you’re used to, and in other ways, it’s a perfect step forward for the booze-and-lodging brand. The beer, wine and food are what you expect—they won’t change the world but will make you full and content. After all, no one can really be mad with a full pint of a well-hopped beer and plate of Cajun tater tots.

The beer is both exactly the same core pours you’ve had at every location, as well as a healthy amount of impressive just-for-Kalama beer offerings (I’d recommend asking what’s new and limited release). The property is more beautiful than most of the renovated schoolhouses in the McMenamins portfolio, yet full of artfully crafted and well-placed touches that sit like secrets waiting to be discovered.

Two hidden passageways exist, concealed in plain sight behind paneled walls in different hallways, lovely murals depicting historical events adorn the walls throughout the grounds, and the architectural aesthetic was built to honor the Hawaiian heritage of the town’s founder, John Kalama. The property is one you’d do well to get lost in, grab and a pint and just wander the grounds. 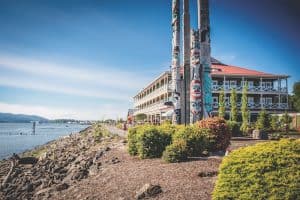 Cloud Bar, perched on top of the hotel, is the perfect place to start with views of the river not rivaled within 100 miles. From there (once you’ve located the secret passageways, of course), wander just south, past the three sky-scraping totem poles, along a sleepy little well-paved path to a small cabin on the shore. It’s not just any cabin, of course, it’s Ahles Point, the coziest place to enjoy a pint on the shores of the Columbia. A wood-burning replace, a small bar that seats only a few patrons, and a couple small tables are all you’ll find, making it the perfect place to enjoy a few beers and chat up the bartenders.

It’s far enough away from the hustle of Seattle or Portland to feel like you’re on vacation, but it’s just a short drive, leaving you with a feeling of being a million miles away yet right at home. In a way, it’s like adult summer camp. The other lodgers don’t travel too far during their stay. You’ll see them again at the restaurants during meal times. On the shore are water activities, and it’s not unusual to hear singing and merriment once the sun goes down. People are friendly and easy to meet, the beer is cold and well-made, and even when the service is slow, you remember that’s because life is slow here, and that’s exactly why you came in the first place.