Pole-vaulting since high school, Philip Milliman heard about the Washington Senior Games in 2003. He and his father, Charles, have attended ever since. In 2017, at the ages of 66 and 84 respectively, they took gold in their age categories for pole vaulting at the National Senior Games in Birmingham, Alabama. Charles also walked away with a gold in the high jump. Charles Milliman is pragmatic about it all. A retired minister who felt a call to ministry when he was working for Boeing in the 1960s, he competes in six track-and-field categories. “I just do it within my own ability. I enjoy competition but it’s mostly to see what I can do,” he said. “Some events I come in seventh or eighth place. It’s not the winning. It’s the finding out what I can do.” He took up endurance running on his 78th birthday, running three marathons in three days to equal his age and donating money raised to the Boys & Girls Clubs of the Olympic Peninsula. 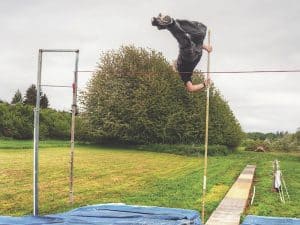 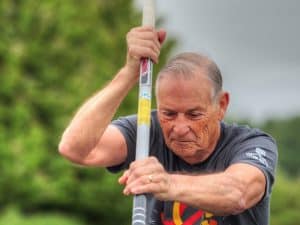 He repeated the endurance goal for his 80th birthday and his 85th, donating money to charities each time. The senior Milliman has been training for marathons since he was 39. He found he could lose his mind in running, and its ability to drastically reduce stress levels has kept him a fan ever since. With sixty-seven marathons under his belt, he’s still finishing in under seven hours. “ The main benefit (of staying active) is the wholeness of life,” he said. “You can do more at an older age when you’re physically, spiritually and mentally fit.” As a volunteer pole vaulting coach at Sequim High School, Philip Milliman’s enthusiasm for physical activity is equally inspiring. “In some ways, Dad and I aren’t normal, but we think of ourselves that way,” he said. “We strongly believe in bringing others along for the ride, being excited about it, moving until you drop.

It’s never about beating someone else. It’s about beating yourself or being the best you can.” Philip Milliman remembers that after church on Sundays when he was growing up, his folks would suggest a hike in the mountains instead of the less active pursuits his friends were engaged in. Today they invite others to hike portions of the 130-mile Olympic Discovery Trail as they complete it in segments. It seems to be a Milliman motto: “I’m never comfortable just sitting down,” Philip said.

“I have no strict regimen. If I register for a race, I put in more time for training. I started running and got in the habit of it and kept it up. I run about every day except Sundays. As a retired minister, I don’t run on Sundays. I’m aware of alternate distance and intensity workouts but I just go out and run most of the time.”

“If I’m training for ultra- distance, like my birthday when I ran 85 miles last November, I eat a boiled potato every hour. But any special stuff? No, I just eat regular foods. My wife’s a good cook. We don’t eat veggies everyday or fish once a week but we eat good meals. Not a lot of desserts. We couldn’t afford them when we were younger so I never got in the habit.”

Like father, like son. Philip thanks his wife, Rosaura, for his eating plan. Organics make up 80 to 90 percent of their diet, such as chicken, fish, fruits and vegetables. He’s an avid tea drinker and supplements with smoothies to ensure optimal produce intake.

“Our family’s always been pretty active physically. My dad and mom are great inspirations.” Philip stays engaged with backpacking, skiing, running and organizing church activities like bicycling. His sister and brother-in-law are also Spartan racers. “I believe by keeping moving, the blood flows to the places that need healing.”