For those keen to learn about pork, Brandon and Lauren Sheard of Farmstead Meatsmith are apt teachers. This entrepreneurial duo has created something special over on Vashon Island, after dreaming up a destination where the narrative could remain unbroken—from the field to the table.

What started as a small family business has evolved into a triple-tiered abattoir, butchery and educational operation—the only of its kind in the nation—and an incredibly successful one at that. Now, they’ve become trusted experts on the subject in the Pacific Northwest and beyond.

Although the business officially launched in the fall of 2010, it began when the pair met in academia in 2007. Brandon Sheard said the pair was “totally going the full professor route, planning to stay in school forever.” Then, he said, “We got disillusioned and wanted to do something real—in the most vague sense possible.”

That’s when they decided to relocate from Southern California to Vashon Island. Seeking work, Brandon traveled door to door until happening upon a butcher shop that had opened the day before. The venue had a seven-cow dairy and made its own cheese and wine, something Brandon knew a bit about thanks to prior work at Whole Foods. Despite the scene being “absolute chaos,” he quickly realized the benefit of a workplace where one has to be ready to dive into anything. “If you wanted to learn,” he said, “you could jump in.”

Soon he was making the rounds at farmers markets, teaching himself how to cook and even skinning sheep heads when he “could barely hold a knife.” When the recession arrived and the butcher disappeared, he suddenly found himself staying up at night to cut meat. “I was working backwards—from the culinary end … from learning how to cook,” he recalled.

Farmstead prides itself on keeping animals on the land they know and employing “peaceful and humane kill methods specific to each animal’s nature.” They then 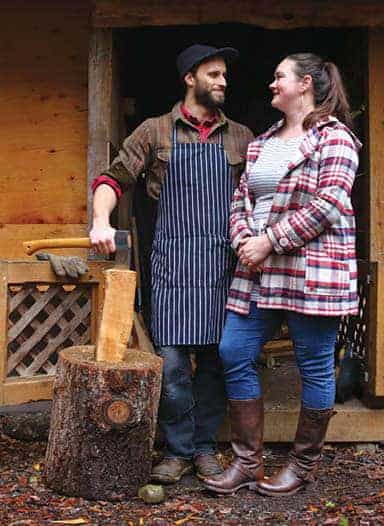 offer every part of the animal back to the farmer. And, as the company promises on its website: “Because the dinner table is where the rubber meets the road, particularly with unfamiliar cuts, innards and extremities, Brandon makes himself available for advice long after he leaves your farm.”

Several times a year, the Sheards offer a hands-on, three-day workshop called “The Family Pig.” This series allows participants to use their hands and antique cutlery to transform two pigs of heritage breed into fresh, cured and cooked pork. One thing carried over from their academic years, Brandon said, was an “undeniable impulse to teach.” Their classes provide “an earnest education,” where nothing is diluted or dumbed down. “You go home to do this by yourself and for yourself.“

While some students see the workshop as an investment and food provisioning for the future, others are restaurant chefs wanting to broaden their skills. Mostly the course is geared toward small-kitchen and home chefs. The days can be long and laborious, but each involves a rewarding meal during which students enjoy food deemed “better than anything you can buy—and easier.”

After the first class spent outdoors, the group gathers for a late lunch of fresh offal. (This is the dish Brandon makes for those who think they don’t like liver.) The second day usually features a meat pie made from the kidney of the pig, while the third day features “blood sausage, pâté, whatever we are able to make.” Lauren typically serves a loaf of bread and kale salad. Brandon promises the meat “tastes nothing like what anyone’s ever had before.”

So what’s the workshop’s desired outcome? “Prowess and authority,” Brandon said. Their workshops aim for “the opposite of coming home with 1,000 recipes.” Instead, he wants students to walk away with authority for culinary decisions.

Farmstead seems to be unique in offering this experience—from kill to meal. “I’m probably the only one crazy enough to put sharp knives in newbies’ hands for three days,” Brandon said. Among its loyal fans, the class has even counted vegetarians and vegans—those choosing to not eat meat because of what’s commercially available.

“I really love watching people have epiphanies,” Brandon said. When it comes to the food we typically eat, most of the processing has been obscured, making the end product a mystery. “Yet here, the food has traveled maybe 20 yards,” he said. “You see the full story. … You can easily fit the whole narrative in your head.”

The Dirty Gourmet Cookbook is Classing Up Your Campout

Tags from the story
Farmstead Meatsmith