Three net-zero home designs all have the same goal: to produce as much energy as the owners use

Building green became an option for Andri Kofmehl and Veena Prasad when their 2014 house search mostly turned up older homes that required too much upkeep. “I don’t think we even owned a drill,” Prasad said. They considered purchasing a teardown and building new, but since construction can be so energy-intensive and wasteful, they would only do that if their home could be sustainable and with a very low ecological footprint—all within a fairly modest budget, by Seattle standards. Enter Ted Clifton, co-owner of the Bellingham-based TC Legend Homes, a company that specializes in the construction of net-zero homes for the same cost as a traditionally built house. “They wanted to push the envelope even farther [than energy efficiency] and see, ‘OK, how green can we go with the money we have?’” Clifton said.

The group opted to strive for an Emerald Star rating from Built Green, a certification program from the Master Builders Association of King and Snohomish Counties. In Emerald Star homes, net-zero energy is one prong of a holistic approach that includes reducing the home’s water consumption and integrating healthy building materials, among other tenets.

The subsequent three-story West Seattle home was designed for flexibility and future use. It features a ground-level, one-bedroom apartment that can be used for an aging family member, houseguests, or as a rental. That’s topped by two floors for the couple, their 5-year-old twins, and Prasad’s mother. There are the common eco-elements, such as low-flow toilets, energy-saving appliances and a solar array, as well as the less common, like a 10,000-gallon rainwater storage and filtration system that reduces their draw by 76 percent. “I love the rainwater because I don’t like how chlorinated city water tastes,” Prasad said. Thick insulation, Structural Insulated Panel construction, and triple-paned windows prevent unnecessary air leaks, while an HRV system supplies continuous fresh air. “We have a very tight envelope and thanks to the heat-recovery ventilation, we always have fresh air in the house,” Kofmehl said.

During construction, Clifton’s team did rigorous research to meet Built Green’s requirements, installing Forest Stewardship Council-certified lumber and no-VOC paint, and avoiding PVC, a chemical that can be found in everything from plumbing pipe to vinyl windows. “We had to scrutinize every single building material,” Clifton said. All in a day’s work for a company that regularly seeks to upend common assumptions. “Most people either don’t realize it’s possible or think it’s just going to be wildly expensive, not cost-effective,” Clifton said of building to net-zero standards. “Our goal as a company is to turn that tide.”

Jabe Blumenthal has long worked in the climate change and clean energy fields, at one time as a board member at the Bullitt Foundation when the organization was building the world’s greenest office building—the Bullitt Center, a six-story “Living Building” in downtown Seattle. When it came time for Blumenthal and wife, Julie, to build their own project on a stunning Madrona lot, they opted to construct a Passive House, a rigorous, high-performing building standard that drastically minimizes a home’s energy load. The couple hoped their project might nudge the local market. “The idea was if we and twenty other people build houses like this in Seattle, that will help drive up the number of companies that know how to build these houses and drive down the cost,” said Blumenthal, who teamed up with SHED Architecture + Design, Hammer & Hand and Passive House expert Dan Whitmore.

For the interiors, the couple wanted “simplicity of materials and design, ease of cleaning and maintenance, open floorplan, and then views, views, views,” Blumenthal said. Now, concrete floors and artful walnut cabinetry with a medley of colorful doors are woven throughout, encased in an airtight shell with expansive triple-paned windows overlooking Lake Washington. A solar array ensures the home produces the annual energy demands of the house and the electric car charging in the driveway.

The house was the first Passive House that SHED principal Prentis Hale designed. These days, hitting the highest level of energy efficiency possible is always a part of the firm’s brief when working with clients on new builds. “For new houses, we try to only take on projects where a client is going to achieve a net-zero standard. They don’t necessarily need to certify it, but it needs to be part of the conversation,” Hale said. “If you have an experienced design firm and interested contractor, you can get houses to perform really well without too much effort, just by being conscientious builders and designers.”

When repeat clients approached architect Matthew Coates of Coates Design Architects to design a family cabin on Tumble Creek in the Suncadia Resort area east of the Cascades, there were a few musts. The floorplan needed to accommodate large family gatherings, so two en-suite bedrooms facilitate privacy while the open living spaces connect everyone together in one fluid move. A bunkhouse handles the younger contingent, providing a separate place for the kids to get loud, play video games and plug in for band practice. Most importantly, the home was designed to be net zero, to produce as much or more energy than its occupants consume. That just made sense for the clients, who had worked with Coates before to design and build the first LEED Platinum home in Washington outside of Seattle. “They’re just the type of people that believe that setting an example and doing the right thing is part of what they want their legacy to be,” Coates said.

Coates’ design lets the house meld with its setting. Materials such as board-formed concrete, Cor-ten steel and reclaimed barnwood evoke the colors of the surrounding scenery. A cantilevered roof with deep eaves strikes a dramatic profile while adhering to passive solar design principles—admitting low-lying winter sunshine and blocking harsh summer rays. The angle and position of the roof is ideal to support its 10 kWh PV solar panel array, and the entire system is engineered to include a Tesla Powerwall as soon as it becomes available.

When striving for optimal energy efficiency in home design, Coates said, the sweet spot is being able to combine efficient appliances and mechanical systems with a tight building envelope, and supply it all with clean energy, such as wind or solar. Getting that combination right ensures a home lives well into the future—like this cabin, which is intended “not just for now,” Coates said, “but also for the generations to come down the road.” 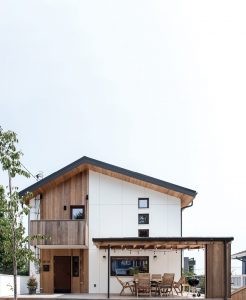 This West Seattle home earned an Emerald Star rating from BuiltGreen, without sacrificing any beauty. 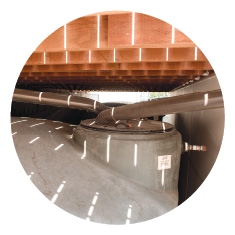 The West Seattle home has a 10,000-gallon rainwater storage and filtration system. 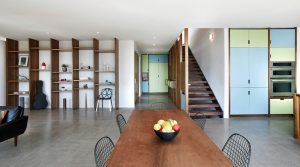 The Madrona home has concrete floors and colorful walnut cabinets. 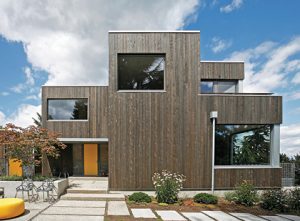 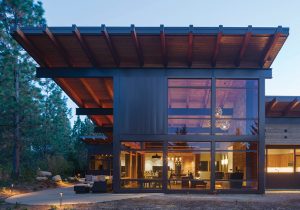 The Cle Elum home has open living spaces and a separate space for the kids.