ANNA HOOVER CHUCKLED when asked what prompted her to build an artist’s cabin several years ago. “The building was inspired by the need for a home for this beautiful printing press that I was given by my parents,” Hoover said

The bright orange press was sizeable, which Hoover estimates weighs around 800 pounds. It was designed by Glen Alps, a printmaker and professor at the University of Washington, and he only made a limited number of them. “I studied printmaking in college and then I got this beautiful printing press, so I really felt like I needed a studio to put it in,” Hoover said. “So that’s where it all began.”

As the daughter of John Hoover, a Native Northwest painter and sculptor of Aleut descent who died in 2011, Hoover is no stranger to artistic pursuits. Her studio sits on a small patch of land on the family’s 3-acre parcel in the South Puget Sound-area, where the younger Hoover was born and raised. Her mom’s house and her father’s former workshop are just down a short, wooded path. “It’s a special place to my family,” Hoover said. Tucked back from the road and surrounded by towering cedar, hemlock, and fir trees, the studio’s site imparts a feeling of stillness, stemming from the view of the water’s glassy surface in the distance. “I have a lot of fond memories of that area and that body of water,” Hoover said. 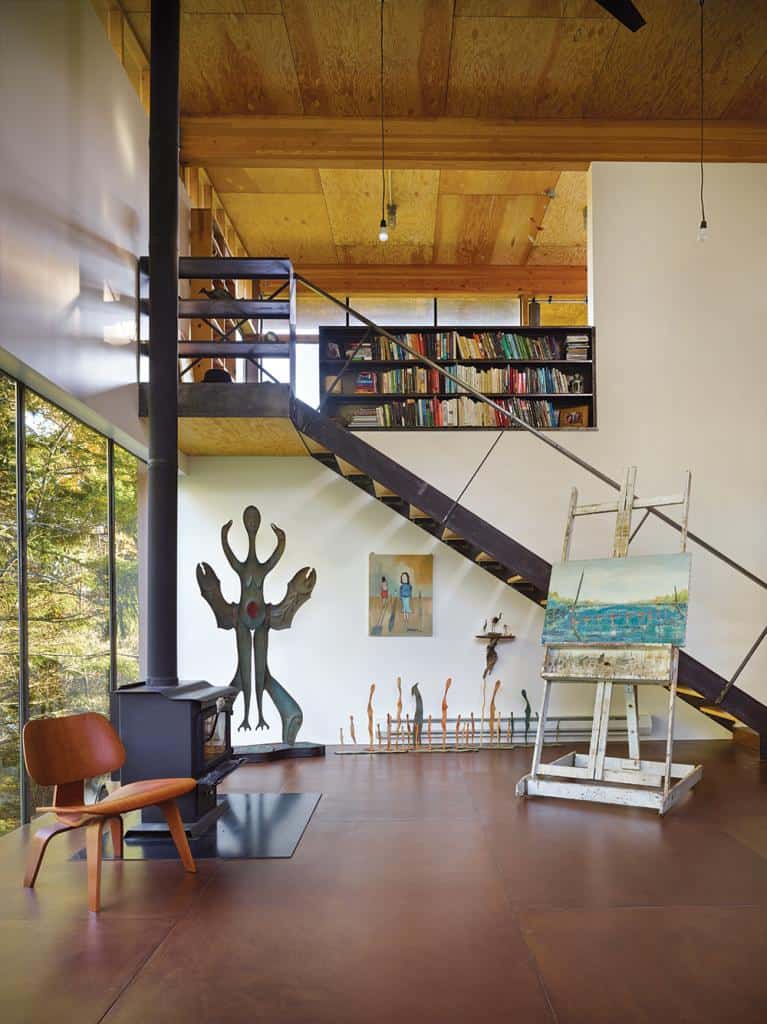 For the studio’s design, she tapped Olson Kundig Architects, the celebrated Seattle firm that has a reputation for distinctly modern wilderness cabin designs throughout the Pacific Northwest. “I like how [their work] can be stark and modern, but it can also fit very snug and nice in its setting,” Hoover said. She paired up with architect Les Eerkes, who now runs his firm Eerkes Architects but was employed at Olson Kundig at the time. “Anna loved this location,” Eerkes said. “And part of loving some place when you put a building on it is asking how you can enhance it.” He and contractor Schuchart/Dow endeavored to do that, all while staying within Hoover’s tight construction budget.

The studio’s compact footprint—just 693 square feet—belies its exterior scale. It floats atop six concrete piers, which were cheaper than pouring an extensive foundation and did less to disturb the land, then rises up neatly beside the nearby trees. The exposed framing system, composed of weighty beams with substantial bolts and metal cross-braces, gives off a certain solidity, while a cantilevered bedroom and an oversized eave make for an eye-catching silhouette. “We went for a 10-foot overhang on the roof, rather than 8, just to give it a little more drama,” Hoover said.

Wide double doors, clad in gray-painted Hardie Panel, lead inside, “where you’re immediately greeted by the Puget Sound,” Hoover said. The ground-level has an open kitchen and living area with double-height ceilings and glass expanses that frame the outlook to the water, yet the building seems to envelop you upon entering. A wood stove in front of the couch beckons. “I really just wanted it to be nothing more than what you need,” Hoover said.

Eerkes thought carefully about how to use glass in the project, to both capture the view and flood the interior with natural light conducive to art-making. “Glazing is what we craved, and it’s one of the more expensive components to any of the homes that we build,” Eerkes said. At the time he was working on a remodel of his own home and experimenting with sheets of insulated glass. Schuchart/Dow was game for incorporating the product into a window system. “They’re a big contractor with lots of capability, but they’re mad about design,” Eerkes said. The 9-foot-tall insulated glass units are joined with thin strips of metal in order to minimize the framing and get more view. “It’s a pretty efficient system, but very simple,” Eerkes said.

Upstairs in the artist’s cabin, a lofted bedroom joins an office space via a narrow catwalk. The bedroom needed an egress window and ventilation, so the team came up with a solution involving a panel, painted red on the exterior, counterbalanced with heavy weights on chains. The panel can be tugged down to create a large unscreened opening, bringing in the breeze and the feeling of sleeping in the tree canopy. “It’s just so wonderful to be able to move big things with gears,” Eerkes said of the set-up. “It’s something to engage with. Buildings that have parts and pieces that you can manipulate, almost like on a boat, create relationship.”

As far as finishing touches went, the team’s approach was to “reduce, reuse, recycle,” Hoover said, thus earning the project’s nickname “Scavenger Studio.” To that end, salvaged materials include the studio’s maple and steel stair treads, a boat porthole at the top of the stairs, kitchen cabinets pulled from a Seattle house slated for demolition, and exterior landscaping saved from a backhoe. When she got word the plants were to be discarded in a yard remodel, “I rented a U-Haul and brought my shovel and a wheelbarrow,” Hoover said.

In other places, the team chose inexpensive finishes, like Masonite for the floors, polycarbonate for the clerestory windows, and plywood for the ceiling. Hoover rolled up her sleeves and tackled a fair amount of the finish work herself, even picking up a wood-burning torch to char the exterior wood for a blackened Shou Sugi Ban effect. Despite not having construction experience, she had no qualms about taking such a hands-on approach. “I fish commercially every summer in Alaska, and it’s hard work,” Hoover said.

Now, the studio is filled with art from family and friends, from the tall carved cedar “Salmon Woman” statue by Hoover’s father to the Glen Alps printing press. These days, Hoover’s medium is film, as she earned a graduate degree in indigenous documentary filmmaking and submitted a short fiction film to 2017 festivals. Her studio is there when she needs it. “I do get to write there,” Hoover said. “It’s a magical place to enter and have a seat.”

Get the Industrial Farmhouse Look

DIY Décor: The Five Rules to Salvage and Source Your New Aesthetic