Dog handler Justin Broderick had to run to keep up with Chester, a 14-year-old golden retriever lab mix as he bounded and zigzagged his way through the forest.

“Atta boy, let’s check back this way,” Broderick called out. 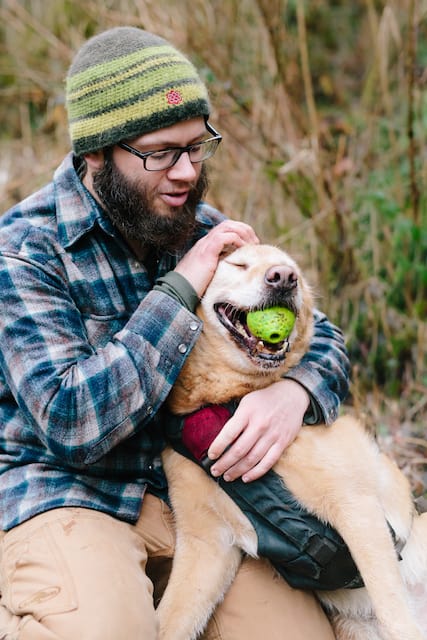 “Can you show me?” Broderick asked.

Chester indicated, nose to the ground, toward a scat sample another handler had placed for this training exercise. His reward: A minute or two of playing with his beloved ball.

Chester is one of twenty-one dogs at Conservation Canines, a detection service run by the University of Washington’s Center for Conservation Biology. At UW’s 4,300-acre experimental forest near Eatonville, handlers train rescue dogs to find scat from some of the most elusive and endangered animals in the world, clues that researchers use to determine a species’ health and likelihood of survival. These dogs have helped track the effect of windmills on migratory birds and tar sands oil extraction on caribou herds. They’ve looked for grizzly bears in the Pyrenees on the border of France and Spain; lions and leopards in South Africa and Mozambique; pumas and jaguars and giant anteaters in Brazil. In February, handlers Jennifer Hartman and Suzie Marlow, along with two dogs, Athena and Skye, were scheduled to leave for four months in Nepal and Vietnam searching for pangolin, the most trafficked mammal in the world, poached for its scales and meat.

For dogs like Chester, who came from an animal shelter in Seattle, conservation work is also a chance at a better life. “We want them to be curious, we promote their wildness,” Hartman said. “Some of the dogs we rescued hadn’t really been outside. They were afraid of leaves, and seeing grass and wet and gooey (stuff) was weird for them. They would look at their own shadows and freak out. But what’s neat about bringing them here and encouraging them to be themselves, you see this whole other side come out.” 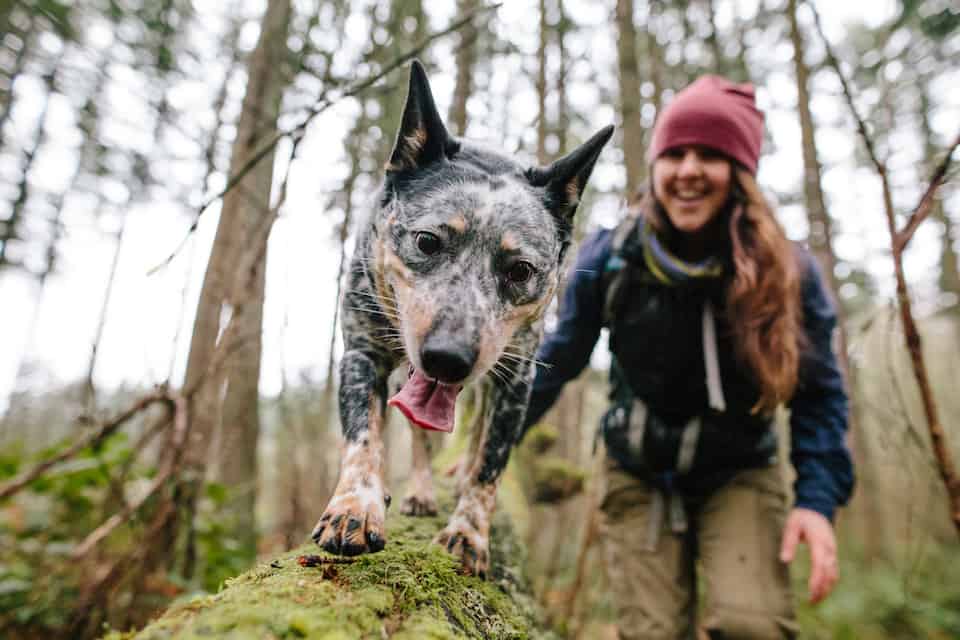 Conservation Canines’ clients are universities, government agencies, conservation groups, even companies seeking to measure their impact on wildlife hire. From scat samples that handlers collect, researchers can learn about an animal’s diet, genetics and exposure to toxins. They can determine the population size, distribution and what environmental pressures it is facing. Hormones can indicate stress levels and reproductive health, all without disturbing the animal.

Twenty years ago UW’s Samuel Wasser, who directs the Center for Conservation Biology, pioneered the use of detection dogs for wildlife monitoring with help from narcotics dog trainers at the Washington State Department of Corrections. They knew that a dog’s nose was infinitely better than the human eye when it comes to finding scat, and dogs can cover more ground than cameras or baited traps.

These dogs can also help researchers get a broader picture of what is happening in an ecosystem. Conservation Canines’ dogs are being used in a UW study tracking wolf recolonization in northeast Washington. Instead of just finding wolf scat, the dogs find samples from cougars, bobcats, coyotes, black bears, grizzly bears, lynx, fishers, martens and wolverines. One of the first scents that dogs here are trained to detect is wolverine scat, partly because the animal is so rare that if their dogs ever find it in the field, it is a prize for biologists. 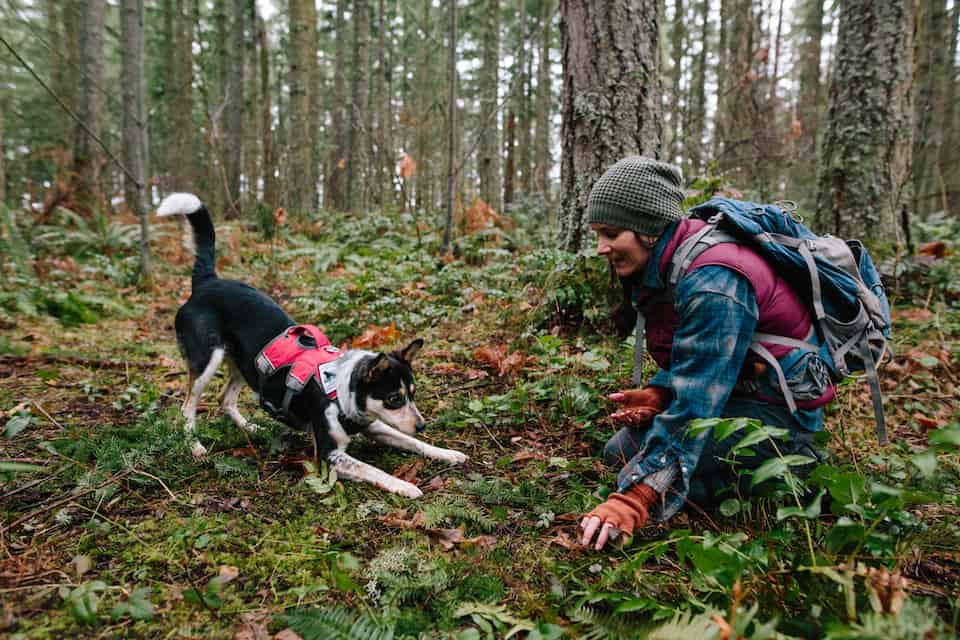 “This method allows us to see, as the wolf moves in, what actually happens to the coyote population, what happens to the lynx, the bobcat,” said Heath Smith, Conservation Canine program coordinator. “We’re really trying to encourage researchers to collect scat from more species so they can look at the bigger picture of what’s going on in the ecosystem, rather than being so focused on just one species.”

The cost of this operation is sometimes an impediment. Thrifty researchers are hesitant to enlist the help of handlers, as their services are more expensive than using cameras or traps. A Conservation Canines handler and dog generally run about $52 per hour. Smith said they get a lot of people wanting to just rent a dog without a handler. Conservation Canines dogs and handlers are trained to work together, said Smith. Without the handler, the dog might get frustrated, develop bad habits, lose interest. “Then those people say, ‘Well this doesn’t work,’” Smith said.

Most of Conservation Canines’ dogs come from the keen eye of shelter staff who know what traits to look for, or from desperate owners who couldn’t handle their high-energy dogs. One such owner took his dog to a trainer, a behaviorist, a therapist and put him on medication to control his energy before bringing him to Conservation Canines. There’s no perfect breed for this line of work, though handlers do consider a dog’s build, since bulky dogs are strong but might not have the endurance needed for a ten-hour hike. Australian cattle dogs, labs and retrievers are well suited, but then there’s Duke, a 30-pound Chihuahua, and Casey, a 15-pound Jack Russell.

What all these dogs have in common is intensity when it comes to fetching a ball. 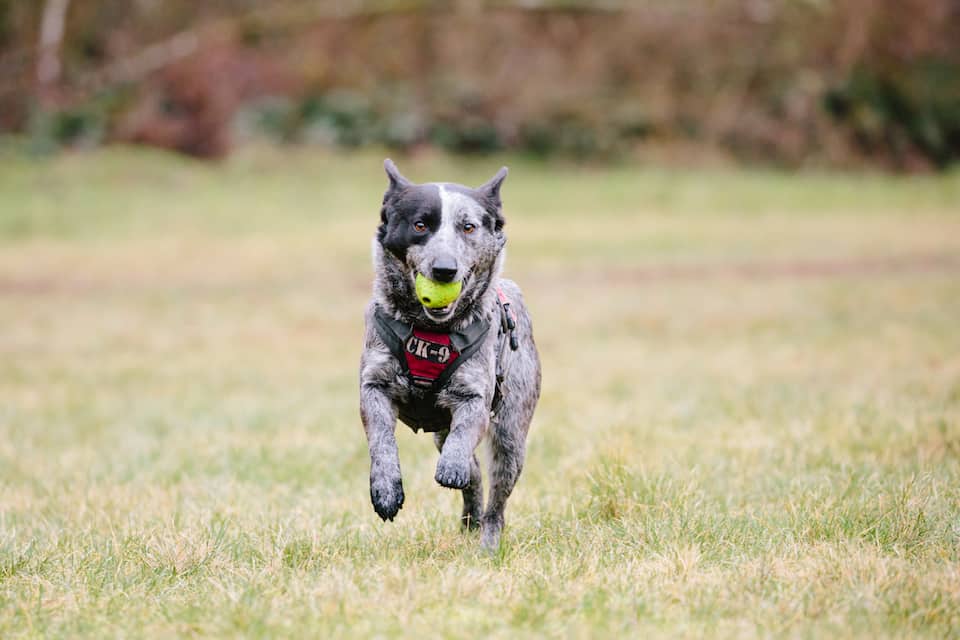 “They’re kind of shaking and they’re just waiting for you to throw that ball,” noted Smith. “Those are the dogs we get.”

Many people contact the program with a claim that their dog is high energy with a nose for smells. “I’m not sure there’s a dog that doesn’t love to smell things,” said Marlow. “We’re not looking for dogs that are just going to run around in the woods.”

These canine handlers are also a rare breed. They have to like dogs but also be capable of surviving alone in the wilderness for long stretches of time and without cell service.

“Your job as a handler is to anticipate everything,” said Marlow. How will the weather or terrain affect scent dispersal? What other animals might be nearby? Could they harm the dog? Could the dog hurt them? Is the dog taking in enough water? “The whole time you’re working, you’re constantly trying to be one step ahead of the dog that’s running ahead of you,” Marlow said.

Conservation Canines now works with nine handlers, though that number varies depending on the work load. When handlers aren’t on assignment, they live in sparse cabins near the dog kennels. 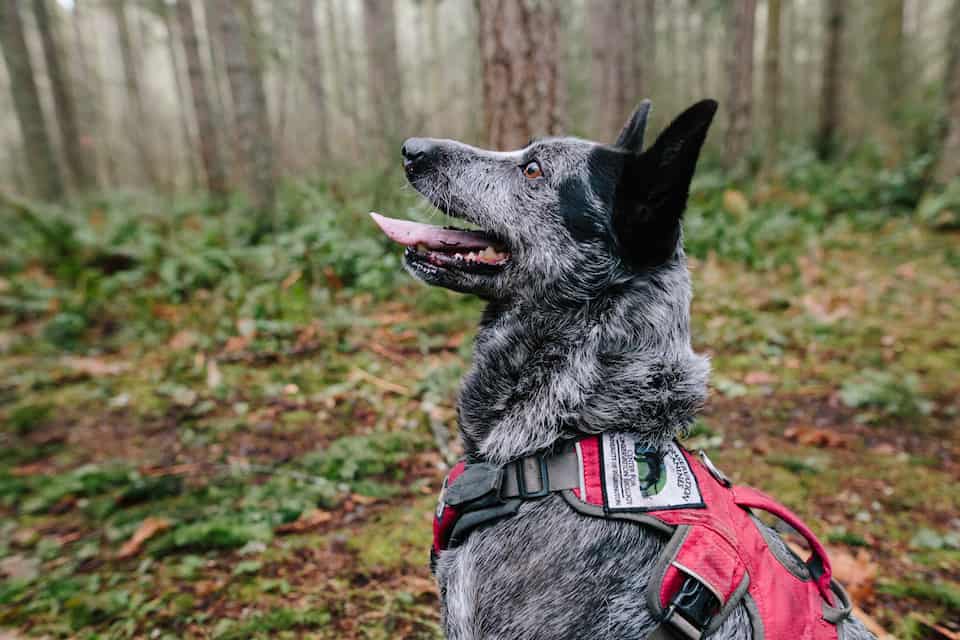 On the last Monday in January, one handler was in Utah with a dog working on an eagle mortality study. Two other handlers were in New Mexico with two dogs on a five-month cougar survey and camping in 40-knot winds strong enough to uproot a tent. Another handler lives year-round on San Juan Island with a whale scat detection dog as part of an ongoing UW study on killer whales. Whale scat stays on the water’s surface for a few minutes, and a detection dog helps researchers following the whales in boats to reach the scat before it sinks.

Back at UW’s experimental forest outside of Eatonville, Chester ran ahead of his handler, Broderick, on the hunt for scat. Handily he found the next two samples. When the training exercise ended, Chester rolled on his back for Broderick to rub his belly. At the end of the day, even though Chester has traveled the world helping protect endangered species, this dog sometimes craves attention for himself.